The Latest: UMass loses 4 players to COVID at Frozen Four 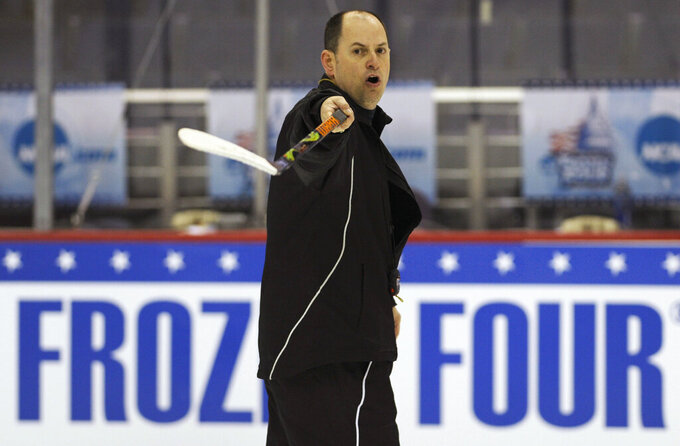 FILE - Bemidji State head coach Tom Serratore leads his players during NCAA Frozen Four college hockey practice at the Verizon Center in Washington, in this Wednesday, April 8, 2009, file photo. The NCAA men's hockey tournament bracket this year would have made Herb Brooks proud. For the first time, all five Division I programs from Minnesota made the 16-team field. (AP Photo/Susan Walsh, File)

Massachusetts will be without four players when the Minutemen face Minnesota Duluth on Thursday night at the Frozen Four in Pittsburgh due to COVID-19 contact tracing protocols, UMass announced Tuesday.

Top goal-scorer Carson Gicewicz, forward Jerry Harding, and goaltenders Filip Lindberg and Henry Graham will miss the game. Head coach Greg Carvel calls the situation "hard to comprehend" but something the team has to accept.

The Minutemen will meet two-time defending champion Minnesota Duluth in the national semifinals in a rematch of the 2019 NCAA championship game. The winner advances to Saturday’s national championship game against either St. Cloud State or Minnesota State.

The U.S. Olympic swimming trials will allow about 50% capacity for the June competition in Omaha, Nebraska.

A temporary pool will be installed at the CHI Health Center arena, which is to host the trials for the fourth straight time.

The arena near downtown Omaha normally seats about 14,000 for swimming, but that will be cut in half to mitigate the potential spread of the coronavirus.

Since more than 90% of tickets were sold for the trials in their original date in 2020, USA Swimming plans a complete refund. An entirely new sale will begin April 16.

The governing body already took the unprecedented step of dividing the trials into two parts. Lower-ranked swimmers will compete June 4-7. The top finishers from that group advance to the second part June 13-20, which will feature the country’s top-ranked swimmers and leading medal contenders for the Tokyo Games.

USA Swimming split the meet to lessen the number of competitors and support personnel on the main pool desk and practice facilities.

The Syracuse University men’s soccer team has decided to end its season after a positive COVID-19 test and subsequent quarantining in the program.

The Orange (2-7-4) had one game left on the regular-season schedule, at home against Wake Forest on Friday.

The cancellation is the second straight and sixth of the season. The Orange also canceled a home exhibition match with Virginia last September, a week before the season started.

University officials say the school is working closely with state and local health officials and the Atlantic Coast Conference Medical Advisory Group to determine the appropriate next steps.