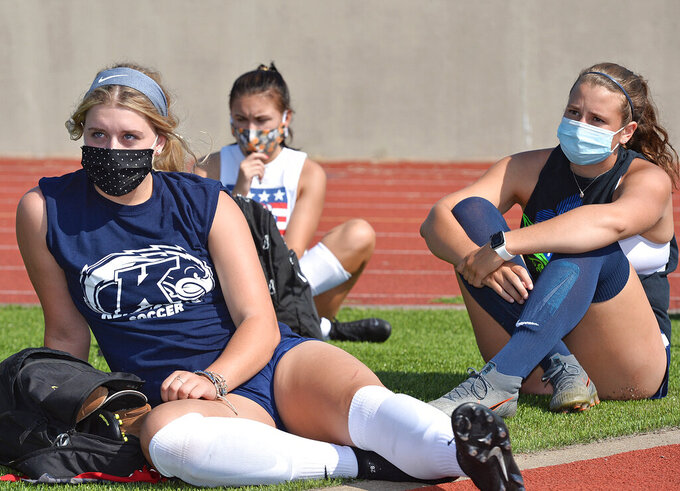 Arizona is suspending all athletic activities until Tuesday after 13 people tested positive for COVID-19 and six more had inconclusive positives.

The women’s soccer program had seven of the potential positives and will suspend all team activities for 14 days to allow for appropriate contact tracing.

Three potential positives were staff members on the medical services team and the remaining nine were spread over eight different teams.

Those with inconclusive positives will be retested for validation.

Boston Marathon registration is on hold while organizers try to figure out how the race will need to change in the coronavirus era.

The Boston Athletic Association said on Thursday that registration will not take place in September, as scheduled. A new timeline will be determined by a COVID-19 advisory group that will help the B.A.A. decide when and how large in-person road races can be held safely again. The group will be comprised of medical experts, public safety officials and representative from the government.

The world’s oldest and most prestigious annual 26.2-mile race, the Boston Marathon postponed its 124th edition from April to September because of the coronavirus pandemic. It was then canceled.

Connecticut Gov. Ned Lamont says there have been preliminary talks to use the Mohegan Sun resort in that state as a college basketball bubble site.

The 185-acre casino complex includes the 10,000-seat Mohegan Sun arena, which is home to the WNBA’s Connecticut Sun. It hosts several college basketball events every year and was just announced as the home for the Big East women’s tournament for the next three seasons.

The resort also includes and exposition center, 1,600 hotel rooms, two spas, a golf course and over 80 shops, restaurants and bars.

Lamont says he thinks "it’s a possibility” after what the NBA had done in its Florida bubble.

Dave Martinelli, the Mohegan Sun’s chief marketing officer, told Hearst Connecticut Media the resort is open to such an arrangement and could provide teams with their own hotel floor and use the exposition center to add courts to the site.

Sky Blue FC will play its two home NWSL fall series matches in October at Montclair State University without fans due to the coronavirus pandemic.

The club will play the Washington Spirit on Oct. 3 and wrap up against the Chicago Red Stars on Oct. 10. Both games are at the university, the current home for Red Bulls II.

Sky Blue FC begins the fall series on Saturday, facing the Spirit in Leesburg, Virginia. Sky Blue will be at Chicago on Sept. 20.

William and Mary says it will cut seven of its 23 intercollegiate sports at the end of the 2021 academic year because of budget constraints related to the coronavirus pandemic.

“The pandemic has made these budget constraints acute and has brought us to a point of reckoning,” the university said in a letter distributed Thursday and signed by university president Katherine Rowe, provost Peggy Agouris and athletic director Samantha K. Huge.

The school says the cuts will impact 118 student-athletes and 13 coaches, and that all athletes who choose to do so will remain on scholarship and graduate as scheduled.

Florida will allow about 20% of its capacity at home games this season, meaning 17,000 fans will be in attendance in the Swamp.

Face coverings will be mandated while entering, exiting and inside Ben Hill Griffin Stadium unless eating or drinking. Tailgating will not be allowed, and the university will not allow several game-day traditions.

Specific information pertaining to ticket ordering and pricing, as well as parking, is expected to be released next week.

North Carolina athletics director Bubba Cunningham says the school is imposing salary reductions and furloughs for coaches and full-time athletics staffers due to financial losses amid the coronavirus pandemic.

In an open letter posted Thursday, Cunningham says the athletics department expects to lose between $30 million and $52 million in projected revenue. That will lead to salary reductions and furloughs running from Oct. 1 through the end of the fiscal year in June.

The department had previously implemented cost controls such as 10% cuts to sports budgets, a spending freeze and leaving open positions unfilled. But Cunningham said reductions so far won’t cover projected losses, so the school is still evaluating additional steps “to address our financial challenges and prepare for the future.”

The Turkish soccer federation has reversed an earlier decision and now says league games will be played without spectators in the first half of the new season.

The federation had planned to allow stadiums around the country to operate at a maximum of 30% of capacity from October.

The federation says it is heeding the advice of Turkey’s scientific council to keep fans out of stadiums.

The decision comes as the number of daily infections in the country have risen above 1,500 and COVID-19-related deaths have reached their highest since mid-May.