The Latest: US regulators to review bulk-power operations 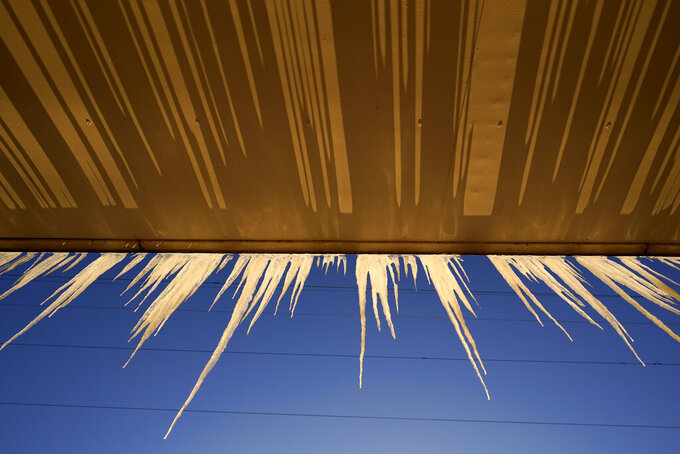 Icicles hang from a building Saturday, Feb. 13, 2021, in North Kansas City, Mo. A cold streak continues across the region with temperatures expected to drop to -13 degrees Fahrenheit by by Monday.(AP Photo/Charlie Riedel)

WASHINGTON — Federal regulators say they are launching an “inquiry” into the operations of the bulk-power system during the severe winter storm that left millions without power in subfreezing temperatures in Texas and other states.

Officials said the immediate emphasis will remain on restoring power to customers and securing the reliability of the bulk-power system, but they will work with other federal agencies, states, regional entities and utilities to identify problems with the performance of the bulk-power system and identify solutions. FERC oversees interstate electricity transmission while NERC oversees reliability standards for the continental U.S., Canada parts of Mexico.

CHICAGO — Illinois Gov. J.B. Pritzker has declared a disaster proclamation after a winter storm blanketed the state with snow and caused power outages.

Tuesday’s declaration means Illinois can tap additional state help and seek federal assistance. Parts of the Chicago area got up to a foot and a half of snow, shuttering schools to in-person classes Tuesday as officials urged residents to stay off the snow-filled roads.

Roughly 7,000 Illinois households were without power. Illinois State Police and transportation officials are urging residents to stay at home while crews clear roadways.

CHARLESTON, W.Va. — West Virginia Gov. Jim Justice has declared a state of emergency in four western counties where an ice storm caused tens of thousands of power outages and knocked trees onto roads.

The declaration Tuesday for Cabell, Lincoln, Putnam and Wayne counties allows the National Guard to assist in storm-related response. More than 60% of Appalachian Power customers in the four counties lost service.

More than 89,000 Appalachian Power customers remained without service in southern West Virginia on Tuesday afternoon. That represents 19% of the utility’s total customers in the state. The utility said some of the outages involved customers who were still without service from a Feb. 11 ice storm.

The utility said it has nearly 2,600 crews and contractors from as far away as Illinois working to get service restored.

HOUSTON — A fire official says three young children and their grandmother died in a Houston-area house fire early Tuesday morning while it’s believed they were trying to stay warm during a power outage.

Sugar Land Fire and EMS spokesman Doug Adolph said that when firefighters arrived after the call at about 2 a.m., the house was fully engulfed and the 41-year-old mother of the children and her female friend were outside of the home and suffering from burns. He said a responder had to restrain the mother from going back into the house.

Both women have been taken to a hospital.

He said they are still investigating the cause of the fire but that the neighborhood had been without power for over eight hours and social media posts from the family indicated they were using the fireplace to keep warm.

He did not have ages for the children but said they were elementary school aged. He said their mother was the daughter of the woman who died.

Psaki said Biden has been kept abreast of the situation and expects he will be involved personally in response to the brutal snowstorm.

Biden’s administration also said Tuesday that delays in vaccine shipments and deliveries are likely because of severe weather across parts of the country.

The administration says the weather is expected to affect shipments from a FedEx facility in Memphis, Tennessee, and a UPS facility in Louisville, Kentucky. Both facilities serve as vaccine shipping hubs for multiple states.

The Centers for Disease Control and Prevention and other federal agencies are working with the jurisdictions, as well as manufacturing and shipping partners, to assess weather conditions and to help offset potential delivery delays and cancellations.

“We’re blowing records that are more than a hundred years old out of the water,” Phil Grigsby said.

North of New Orleans in Slidell, where the area’s weather service office is located, the low Tuesday was 22 degrees, well below the previous record of 26, set in 2007.

PORTLAND, Ore. — Tens of thousands of Oregon residents were without power Tuesday as crews raced to restore electricity after an icy weekend winter storm downed more than 5,000 power lines in the region.

Portland General Electric’s map of power outages listed about 200,000 customers without electricity, while Pacific Power listed about 20,000 in Salem and Portland area.

A weekend weather system brought heavy snow across the Pacific Northwest, with Seattle seeing more than a foot fall Saturday through Monday. But it was northwest Oregon that saw the most severe effects as icy conditions downed trees, collapsed roofs and made driving dangerous.

OCEAN ISLE BEACH, N.C. — The emergency services director in a North Carolina county that was struck by a deadly tornado says the seaside community had little notice of the dangerous weather late Monday.

Ed Conrow told reporters at a briefing Tuesday afternoon that a tornado warning wasn’t issued until the storm was already on the ground and causing damage in coastal Brunswick County.

The official said responders have completed search and rescue operations and will transition to a recovery phase. Authorities said three people died and 10 were injured during storm. Nobody remained missing Tuesday afternoon.

Aerial footage from a WRAL-TV news helicopter showed a handful of home lots covered in splintered wood and debris. Several other roofs had damage ranging from torn-off shingles to roof beams exposed where the storm tore a hole.

Gov. Roy Cooper said the state was sending aid to the area and the National Weather Service’s office in Wilmington also sent a team to survey the damage and confirm that a tornado touched down.

Mark Willis, meteorologist in charge for the Wilmington office, said the same cold front bringing freezing temperatures, ice and snow from Canada to Mexico created conditions favorable to tornadoes in North Carolina, where it pushed up against a warm front from the Gulf of Mexico.

KANSAS CITY, Mo. — The snow, ice and bitter cold gripping Missouri has delayed people from coronavirus vaccinations, including those who signed up for mass inoculation events that had been scheduled for this week.

The governor’s office said it was trying to reschedule the National Guard-run events, but that registrants should seek vaccinations elsewhere in the meantime. Gov. Mike Parson also said the conditions would likely delay some vaccine shipments.

The cancellations follow a storm that dumped several inches of snow in much of the state and sent temperatures plunging below zero, including in Kansas City, where it was 9 degrees below zero on Tuesday, a new record for the date.

Also Tuesday, Energy companies in western and southwest Missouri again imposed rolling electricity blackouts in an effort to reduce the strain on electrical systems during record-setting cold weather. The Southwest Power Pool lifted the order at about 10:45 a.m. and utility companies said their customers should have power returned quickly.

City utilities in Independence and Springfield, along with Liberty Utilities, also imposed emergency power outages before the order was lifted.

In the Fort Worth area, more than 200,000 residents were told to boil their water before use because of power outages at water treatment plants.

And further south, in Corpus Christi, a similar boil order was issued after a major water line broke in the city of about 325,000 people. Mayor Paulette Guarjardo said the city would distribute bottled water to people who could not boil water because of power outages.

The Federal Emergency Management Agency said in its Tuesday daily operations briefing that Texas officials have also requested 60 generators from the agency and the priority for their use will be hospitals and nursing homes.

And as of midday Central time, more than 2,700 U.S. flights had been canceled, led by more than 800 at Dallas Fort Worth International Airport and more than 700 at Bush Intercontinental.

MEMPHIS, Tenn. — The National Weather Service says that the temperature at Memphis International Airport hit 3 degrees Tuesday morning, the coldest temperature observed there since 1989. The reading came after neighborhoods and suburbs saw 3 ½ to 4 inches of snowfall Monday.

Wind chills hit the single digits below zero overnight and are expected to remain near or below zero throughout Tuesday as layers of snow and ice covered roads and highways in Memphis and throughout west Tennessee.

The Memphis Area Transit Authority said it has stopped running buses and other transportation vehicles on Tuesday due to the road conditions, with exceptions being transportation for dialysis patients and anyone traveling to a warming center.

Meanwhile, the county's fire department reported that a 10-year-old boy died after falling into an ice pond Sunday.

The Omaha and Nebraska Public Power Districts warned that more outages could be required later in the day and on Wednesday as cold temperatures strain the power grid, so they were still urging customers to conserve electricity.

Residents in Nebraska experienced some of the coldest weather on record early Tuesday, putting a strain on the power grid that saw the state’s power utilities implementing rolling outages. In Omaha, the temperature bottomed out at 23 below zero overnight — the coldest in 25 years.

The Lincoln Electric System reported nearly 15,000 customers without power for a time Tuesday morning as temperatures there dropped to a record low of 31 below, smashing the previous record of 18 below set in 1978.

PIERRE, S.D. — Nearly 11,000 electric customers in South Dakota were without power on Tuesday, according to poweroutage.us, a website that tracks utility outage reports.

East River Electric Power Cooperative, which is part of the Southwest Power Pool, said it was expecting rolling blackouts for its customers, lasting up to an hour. Customers in Viborg, Hurley, Menno, Sioux Falls and western Minnesota were impacted.

Rolling blackouts of up to 30 minutes were also planned for Tuesday morning in the northwestern Minnesota city of Moorhead, where the temperature was negative 8 degrees on Tuesday morning. The area was also under a wind chill advisory, with wind chills expected to reach 25 to 40 degrees below zero.

BIRMINGHAM, Ala. — About 100 school systems closed, delayed opening or switched to remote classes on Tuesday in Alabama because of slippery roads or frigid temperatures, and highways were dappled with ice and snow in cities including Birmingham and Huntsville.

Transportation Department cameras showed traffic was relatively light after hours of warnings about hazardous conditions, but conditions might not improve for a day since temperatures weren’t predicted to go above freezing in some areas before Wednesday afternoon.

About 8,400 homes and businesses were without power, mostly in a cluster of rural counties near the Mississippi state line where icing began on Monday.

In rural northwestern Alabama, the town of Haleyville was mostly shut down because of ice that began coating trees and roads Monday.