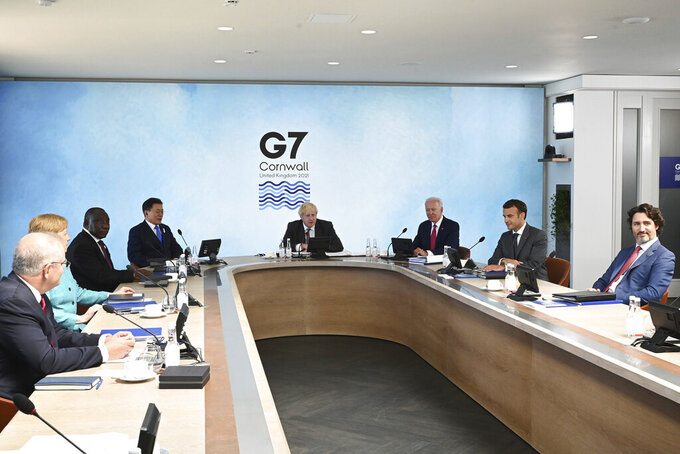 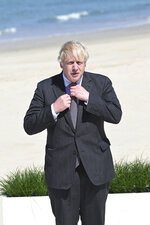 FALMOUTH, England — The head of the World Health Organization has welcomed the vaccine-sharing announcements coming out of the Group of Seven summit but says “we need more, and we need them faster.”

“The challenge, I said to the G-7 leaders, was that to truly end the pandemic, our goal must be to vaccinate at least 70% of the world’s population by the time the G-7 meets again in Germany next year,” WHO Director-General Tedros Adhanom Ghebreyesus told reporters Saturday at the summit in southwest England.

“To do that, we need 11 billion doses,” Tedros said, adding that it was “essential” for countries to temporarily waive intellectual property protections for coronavirus vaccines.

British Prime Minister Boris Johnson, the summit's host, has said the group would pledge at least 1 billion doses, with half that number coming from the United States and 100 million from Britain over the next year.

Tedros reiterated his target of vaccinating 30% of the population of every country by the end of 2021. He said that reaching the goal requires 100 million doses in June and July, and 250 million more by September.

FALMOUTH, England — British Prime Minister Boris Johnson and his wife, Carrie, have welcomed leaders from South Korea, Australia and South Africa, as well as the secretary-general of the United Nations, to the Group of Seven summit taking place on the coast of southwestern England.

The leaders elbow-bumped and posed for photos Saturday on a pristine beach in Cornwall.

The G-7 nations are the U.K., the United States, France, Germany, Italy, Canada and Japan. The British government said the guest nations were invited to take part in the summit as part of Johnson’s “Global Britain” agenda and that the expanded group can help the G-7 “intensify cooperation between the world’s democratic and technologically advanced nations.”

India was also invited, but its delegation is not attending in person because of the severe coronavirus outbreak in the country.

The leaders, whose 3-day summit is scheduled to end on Sunday, are expected to commit to a new plan, called the “Carbis Bay Declaration,” to quash future pandemics within the first 100 days.

Biden told members of Bude Surf Veterans that she had a white longboard of her own with a big butterfly on it. She met with them at a picnic table outside a contemporary art gallery overlooking Mount’s Bay as President Joe Biden attended the Group of Seven summit in southwest England.

Jill Biden observed that that the “water is so calming” and spoke about attending the Invictus Games, an international sporting event for wounded, injured and sick servicemen and women founded by Britain's Prince Harry. She added that she has yet to visit New Zealand and Australia.

Biden and Macron met Saturday as part of the Group of Seven summit in southwest England, where they and other leaders of the world's wealthy democracies are discussing the coronavirus pandemic, the environment, national security, relations with China and economic issues.

The desire for cooperation cuts both ways. Biden described the European Union as “incredibly strong and vibrant,” which he said not only helps with tackling economic challenges but also provides a backbone for NATO.

BERLIN — German Chancellor Angela Merkel and U.S. President Joe Biden have met on the sidelines of the G-7 summit in England.

A spokesman for the German chancellor tweeted two pictures of the leaders sitting at a table in Carbis Bay on Saturday.

“At noontime on the second day of the G7 summit the chancellor talked to U.S. President Biden in between the work meetings," read the caption accompanying the photos.

Merkel spokesman Steffen Seibert didn’t give any details about what the two discussed.

Merkel, who is leaving office later this year, plans to visit Biden in Washington next month. The president invited her to the White House earlier this week.

FALMOUTH, England — Hundreds of environmental protesters took to the Cornish seaside Saturday morning in a bid to draw the attention of world leaders and the international media outlets that have descended on southwest England for the G-7 summit.

Some protesters paddled out to sea, while others sunbathed on the beach wearing masks of leaders' faces.

A crowd of surfers, kayakers and swimmers gathered Saturday on a beach in Falmouth for a mass “paddle out protest” organized by the group Surfers Against Sewage, which is campaigning for more action to protect oceans.

U.S. President Joe Biden and fellow leaders from the Group of Seven wealthy democracies are meeting near the town of St. Ives for talks focusing on the pandemic and climate change.

Earlier, activists from Oxfam assembled on Falmouth beach to protest climate change and put on masks depicting the leaders attending the G-7 summit.

Max Lawson, Oxfam’s head of policy, said activists want the G-7 countries - Canada, France, Germany, Italy, Japan, the U.K. and the United States - to commit to bigger reductions in carbon emissions and to financing to help poor countries adapt to the impacts of climate change.

The two delegations will have a working session and smaller session as part of their meeting on Wednesday in the Swiss city of Geneva. But the White House says it is still finalizing the format of the meeting.

The White House says a news conference with only Biden is the appropriate format to communicate the topics discussed, areas of agreement and sources of significant concern.

The two sides are locked in an escalating diplomatic feud over Northern Ireland, the only part of the U.K. that has a land border with the bloc. The EU is angry at British delay in implementing new checks on some goods coming into Northern Ireland from the rest of the U.K., while Britain says the checks are imposing a big burden on businesses and destabilizing Northern Ireland’s hard-won peace.

The spat has drawn in U.S. President Joe Biden, concerned about the potential threat to Northern Ireland’s peace accord.

The EU is threatening legal action if the U.K. does not fully bring in the checks, which include a ban on chilled meats such as sausages from England, Scotland and Wales going to Northern Ireland from next month.

Britain accuses the bloc of taking a “purist” approach to the rules and urged it to be more flexible in order to avoid what has been dubbed a “sausage war.”

FALMOUTH, England — U.S First Lady Jill Biden and Kate, the Duchess of Cambridge, have written a joint article on the importance of early childhood education after their visit to a primary school on the sidelines of the G-7 summit in England.

The two women met for the first time Friday at a school in Cornwall, southwestern England, where they visited 4 and 5-year-olds and spoke with experts on early childhood development.

In their article, published on the CNN website Saturday, they said the disruption of the pandemic has helped people focus on the things that matter most, and they have a joint belief that the future must include a “fundamental shift in how our countries approach the earliest years of life.”

“If we care about how children perform at school, how they succeed in their careers when they are older, and about their lifelong mental and physical health, then we have to care about how we are nurturing their brains, their experiences and relationships in the early years before school,” they wrote.

They said business leaders, among others, should give more support to the parents and caregivers in their workforces.

“If we want strong economies and strong societies, we need to make sure that those raising and caring for children get the support they need,” they added.

Biden is a longtime English teacher who focuses on education, a passion she shares with Kate, a mother of three young children.