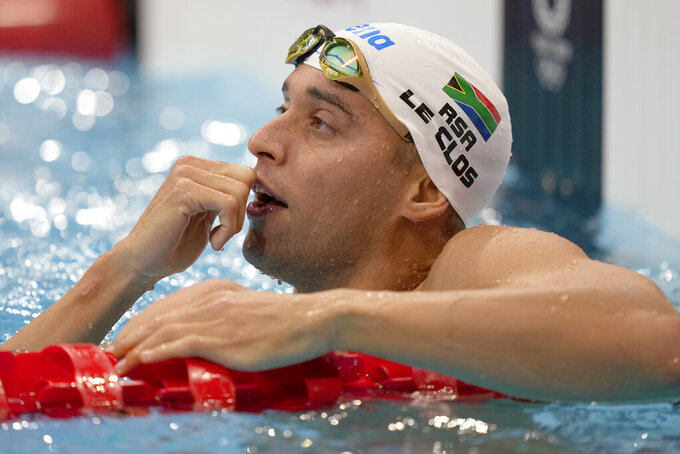 FILE - Chad le Clos of South Africa looks up after his swim in a men's 200-meter butterfly semifinal at the 2020 Summer Olympics, on July 27, 2021, in Tokyo, Japan. Former Olympic champion Chad le Clos was named on South Africa's team on Monday, May 9, 2022, for his seventh swimming world championships. The 30-year-old le Clos is planning to compete in the 50, 100 and 200 meters butterfly at the worlds in Budapest, Hungary, which start on June 18, South Africa's swimming federation said.(AP Photo/Martin Meissner)

The 30-year-old le Clos is planning to compete in the 50, 100 and 200 meters butterfly at the worlds in Budapest, Hungary, which start on June 18, South Africa's swimming federation said.

Le Clos was the 2012 Olympic champion in the 200 butterfly and has also won four world titles over 100 and 200 meters. But he didn't get past the preliminaries in the 100 butterfly at the Tokyo Olympics last year and was fifth in the 200 fly final, raising speculation he might be near retirement.

Le Clos also said in an interview last month with South African news website New Frame that he battled depression last year around the time of the Olympics and eventually agreed to seek help after the Games.

Schoenmaker is listed to swim in the 50, 100 and 200 breaststroke at the worlds while rising star Van Niekerk will compete in the 50 and 100.

South Africa also has high hopes for Matthew Sates, another 18-year-old who set three junior world records last year and won the overall short course World Cup title. He's down for the 100, 200 and 400 freestyle and the 200 meters individual medley.