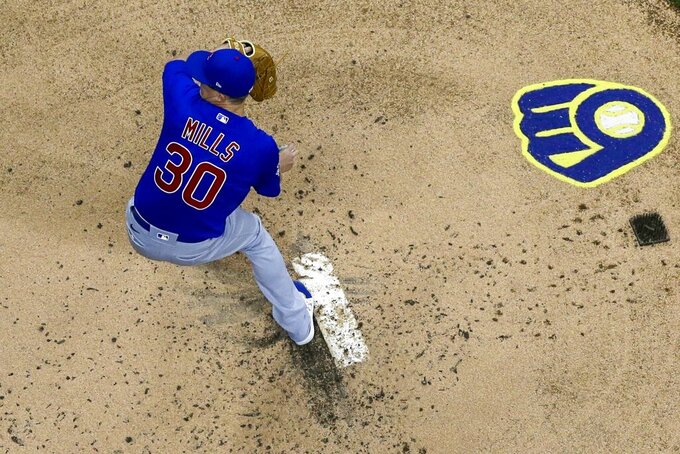 The Chicago Cubs hope to stay on schedule amid a coronavirus scare that’s landed four players on the COVID-19 injured list the past two days. Scheduled starter Kyle Hendricks was scratched Tuesday after the right-hander indicated he wasn’t feeling well — the team didn’t immediately provide more info on his status, other than to say the move was made out of caution.

The team said prior to Tuesday's game that no players have tested positive. Bullpen coach Chris Young and first base coach Craig Driver have been flagged for positive tests.

Joe Musgrove is back on the mound after pitching the first no-hitter in Padres history in his previous start. This time, he’ll face the Pirates at PNC Park -- the 28-year-old righty played three seasons for the Pirates before getting traded to San Diego last January.

Musgrove is from the San Diego area and his parents own and operate a coffee shop in the suburb of Alpine, California. Padres fans have been flocking there since Musgrove tossed his gem last Friday against the Texas Rangers in Arlington.

“It’s something that’s been in the family for 20 years, a small drive through in a small town, so they don’t usually do crazy business,” Musgrove said. “But the last few days have been some of the best days they’ve ever had. I really appreciate people helping support their small business.”

Rafael Devers has homered in four straight games, boosting Boston during its seven-game winning streak. He connected Tuesday at snowy Target Field in a 4-2 win.

Devers and the Red Sox will try to extend their streaks in a doubleheader at Minnesota. Kenta Maeda (1-0, 2.61 ERA) and José Berríos (2-0, 1.54) are scheduled to start for the Twins.

Twins third baseman Josh Donaldson, who’s been out since the first game of the season with a right hamstring strain, is likely to be activated from the injured list for the doubleheader against the Red Sox.

The 35-year-old Donaldson doubled in his only at-bat this season. He hit .222 with six homers and 11 RBIs last year in the pandemic-shortened season.

James Paxton’s season is done after just 1 1/3 innings. The left-hander’s return to Seattle has been cut short by a left elbow injury that will require season-ending surgery. Paxton signed an $8.5 million, one-year deal with the Mariners hoping to re-establish himself after a left flexor strain limited him to five starts with the Yankees in 2020.

“I feel terrible for Pax and having to deal with this one again,” manager Scott Servais said. “If I know Pax, he’ll take the right attitude with it and go forward and try to make the best out of it and come back stronger than ever.”

Baseball's hit king is set to reach another milestone number: Pete Rose is turning 80. The 17-time All-Star with 4,256 hits remains ineligible for the Hall of Fame over accusations he gambled on baseball while managing the Cincinnati Reds in the 1980s. He admitted to betting on the Reds in 2004.