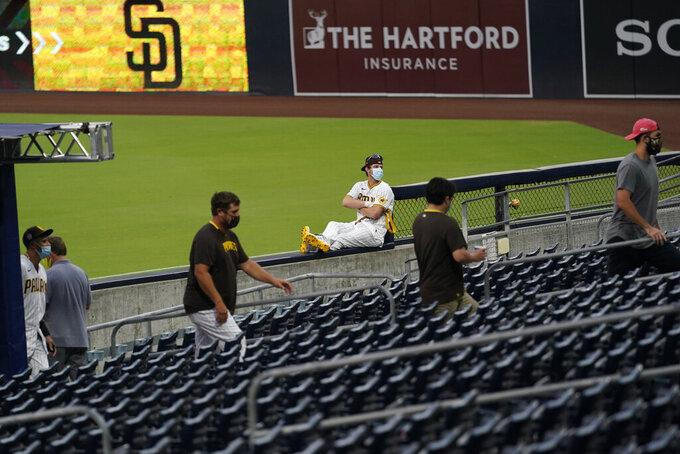 San Diego Padres center fielder Wil Myers, center, keeps his distance as other members of the Padres walk into the stands for a team meeting after their baseball game against the San Francisco Giants was postponed Friday, Sept. 11, 2020, in San Diego, after someone in the Giants organization tested positive for COVID-19. (AP Photo/Gregory Bull) 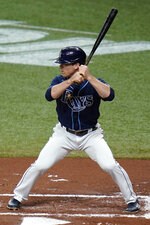 The Giants and Padres will see if their game Sunday at Petco Park will be played after someone in the San Francisco organization tested positive for the coronavirus.

The teams lined up for a moment of silence for the victims of the Sept. 11, 2001, terrorist attacks and the national anthem on Friday night, then the game was postponed. Tonight's game also was called off.

This was the first postponement due to COVID-19 for both teams. There have been 45 major league games postponed this season because of coronavirus concerns.

Orioles right-hander Dean Kremer goes for a repeat shutdown of the Yankees after he pitched one-run ball over six innings against New York in his major league debut last Sunday.

Kremer limited the Yankees to one hit, struck out seven and retired 14 of his final 15 batters. The 24-year-old was acquired from the Dodgers in 2018 as part of a deal that sent away Manny Machado.

Jordan Montgomery is set to start for New York at Yankee Stadium.

Rookie right-hander Spencer Howard will replace Zack Wheeler as the Phillies’ starter in Game 4 of their seven-game series at Miami. Wheeler ripped a fingernail putting on his pants Wednesday, delaying his next start until at least Monday and perhaps longer.

José Ureña is scheduled to start for the Marlins. He allowed three runs in five innings in his first start of the year against Atlanta after being sidelined by the coronavirus.

The innovative Rays became the first major league team since at least 1900 to start a batting order with all left-handed batters when they played Boston on Friday night. We’ll see what Tampa Bay tries next when it takes on Red Sox right-hander Nathan Eovaldi at Tropicana Field.

The Rays stacked their lefties versus Andrew Triggs, who worked around a hit and walk in a scoreless first inning. The Red Sox brought in lefty Matt Hall to pitch the second, and Yoshi Tsutsugo greeted him with a home run.

While some teams have started a lineup in which all batters hit from the left side the first time up, all previous occasions since 1901 included at least one switch-hitter.

“Thinking about it last night after the game, we don’t know their pitcher very well, Triggs,” Rays manager Kevin Cash said. “We’re not even sure how deep he’ll go in the game, but we know we have plenty of right-handers that if they decide to go left-handed at certain points, we have options.”

Boston manager Ron Roenicke said when bench coach Jerry Narron gave him the Rays lineup, he thought it was wrong.

Chicago Cubs right-hander Kyle Hendricks will try to keep up a recent run of solid starts when he pitches at Miller Park against a team he dominated in the season opener.

Hendricks (5-4) has given up one run in each of his last two starts. He worked eight innings and allowed seven hits and no walks in a 5-1 victory over St. Louis on Monday. That followed a six-inning stint in which he yielded six hits and two walks in an 8-2 triumph over Pittsburgh. Those two outings lowered his ERA from 4.09 to 3.41.

Hendricks now goes against the Milwaukee Brewers for the first time since throwing a three-hit shutout against them in the opening game for both teams. Hendricks struck out nine and walked nobody in that 3-0 victory on July 24.