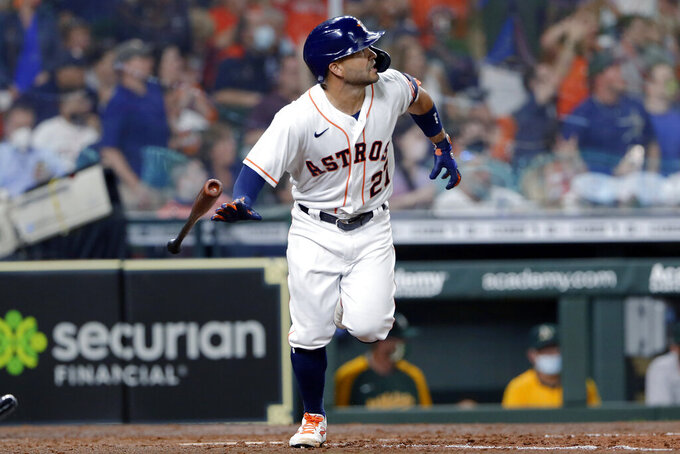 Houston Astros' Jose Altuve flips his bat as he watches his home run during the seventh inning of the team's baseball game against the Oakland Athletics on Thursday, April 8, 2021, in Houston. (AP Photo/Michael Wyke)

All players, managers, coaches and umpires will wear No. 42 to celebrate Jackie Robinson Day, marking the anniversary of the date the Brooklyn Dodgers Hall of Famer made his Major League Baseball debut and broke the sport’s color barrier in 1947.

A video produced by MLB Network titled “Thank You, Jackie” narrated by former star Curtis Granderson will present Robinson’s impact as a champion on and off the field and be shown at ballparks. Teams that are off Thursday will honor Robinson when they play Friday.

Granderson is president of The Players Alliance, an organization of current and former MLB players advocating for Black representation in the sport. Jason Heyward, Jackie Bradley Jr. and David Price will be among the 100-plus players donating either all of part of their game-day salaries on Jackie Robinson Day to support The Players Alliance.

J.D. Martinez and the Red Sox try for their 10th straight win and a four-game sweep at Target Field. Boston has its longest winning streak since a 10-game run in 2018, a season that ended with a World Series title.

Alex Verdugo got five hits in a doubleheader sweep Wednesday, sending the Twins to their fifth straight loss. Garrett Richards (0-1, 10.29 ERA) starts the wrapup for Boston against Michael Pineda (1-0, 1.64).

Astros general manager James Click said he couldn’t say if a player had tested positive for COVID-19 or been exposed to someone who had. There was no timetable for any of them to return.

At one point during spring training, the Astros had to send eight pitchers home because of virus concerns.

WHAT DOES IT TAKE?

Jacob deGrom makes his third start of the season for the Mets, again hoping for a win. And some run support, too.

The Mets ace is 0-1 this year despite allowing just one run in 14 innings, striking out 21 with two walks. This has become familiar territory for the two-time NL Cy Young Award winner — despite deGrom’s 2.06 ERA in 78 starts since the beginning of the 2018 season, New York is only 36-42 in those games.

Rain is in the forecast, but weather permitting deGrom starts against Zach Eflin and the Phillies at Citi Field — with the Mets looking for a four-game sweep of their NL East rivals. DeGrom shut out Philadelphia for six innings in his first start of the year.

Bo Bichette has an 11-game hitting streak, tying his career best. He homered twice, including a game-ending drive, to lead Toronto over the Yankees on Wednesday. The Blue Jays now open a series at Kansas City.