LEADING OFF: Nats set to start short-handed vs Braves 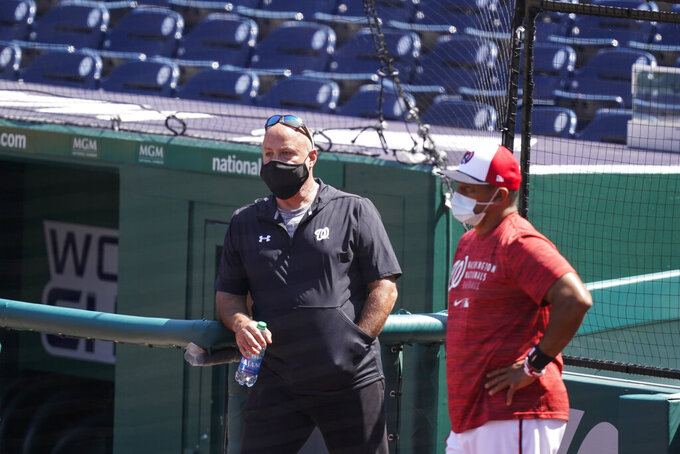 A look at what's happening around the majors Tuesday:

The Washington Nationals are finally set to start their season, hosting the Atlanta Braves after their three-game series against the New York Mets was postponed by a coronavirus outbreak.

The Nats still have 11 players sidelined -- four of whom tested positive for COVID-19. The Nationals haven’t announced who is in isolation because of test results or which additional seven players are under quarantine because contact tracing determined they could have been exposed to the illness.

Asked whether it’s possible his Game 1 lineup for 2021 could feature as many as five starting position players that weren’t expected to be there on opening day, manager Dave Martinez replied: “It is possible. We’re going to make it work.”

“Very rarely — probably never — have you played with the same team on the field the entire season. We kind of look at it like that,” said Ryan Zimmerman, the only first baseman to take part in drills Monday. “We have confidence in our whole roster. We have some guys that are going to step up and play well.”

Drew Smyly is set to start for the Braves, who were swept over three games by the Phillies to open 2021.

Dodgers left-hander Clayton Kershaw (0-1, 7.94) is hoping to rebound from a miserable opening day, when he allowed six runs -- five earned -- over 5 1/3 innings at Colorado. His second start comes at Oakland, which hit .171 as a team while being swept over four games by Houston to start the season. Right-hander Chris Bassitt (0-1, 5.06) is up for the A’s.

James Paxton is back with the Mariners and will make his first start in Seattle since being traded ahead of the 2019 season. Hampered in 2020 by a left flexor strain, Paxton hopes to return to ace form on an $8.5 million, one-year deal with the franchise where he established himself from 2013-18.

WAITING FOR A WIN

Tigers right-hander Casey Mize makes his season debut, trying again for that elusive first career win in the majors. The 23-year-old was the overall No. 1 pick in the 2018 draft and breezed through the minors. He reached the big leagues last season and went 0-3 with a 6.99 ERA in seven starts.

Mize’s control has been a troublespot. He walked 13 in 28 1/3 innings with Detroit last season, then had 11 walks in 18 2/3 innings and a 7.23 ERA in six spring training games this year. Mize will face Nelson Cruz and the Twins at Comerica Park. Lefty J.A. Happ makes his Minnesota debut.