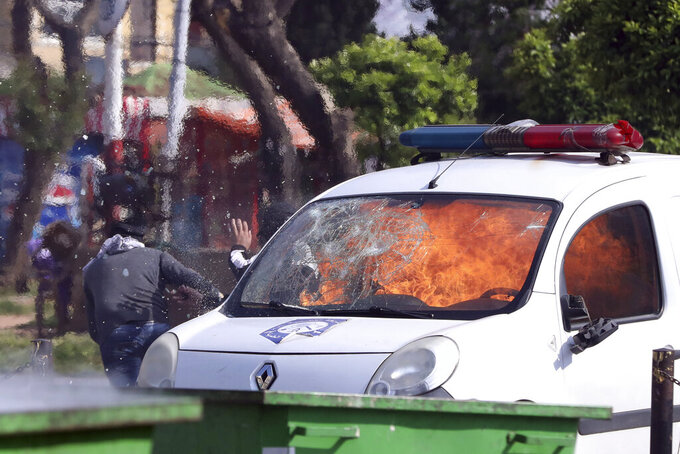 Anti-government protesters set a Lebanese internal security forces vehicle on fire in the northern city of Tripoli, Lebanon, Tuesday, April 28, 2020. Hundreds took part in the funeral of a young man killed in riots overnight in Tripoli that were triggered by the crash of Lebanon's national currency that sent food prices soaring. (AP Photo/Bilal Hussein)

BEIRUT (AP) — Lebanon will request aid from the International Monetary Fund to help the nation find a away out of a dire financial crisis based on the government’s five-year rescue plan, the country's prime minister said Thursday.

Hassan Diab described the plan, which was adopted unanimously by the Cabinet earlier in the day, as a comprehensive “roadmap” for dealing with the spiraling financial crisis and the collapse of the national currency. The crisis has led to escalating violence as protesters enraged by the financial upheaval and rising poverty take to the streets despite a virus lockdown.

International donors have long demanded that Lebanon institute major economic reforms and anti-corruption measures, including in 2018, when they pledged 11 billion dollars. That money has yet to be released.

Despite local opposition by some parties, including the powerful militant Hezbollah group, the IMF is now widely seen as the only option available to Lebanon to secure assistance. The Iran-backed group had previously said it rejected an IMF program, concerned it would come with tough conditions and international dictates. But Hezbollah now seems to have accepted the idea — an admission of how dire the situation has become.

“I call on all Lebanese to consider this day as a turning point for a better future for our country," Diab said. "The road ahead will not be easy, but our determination and optimism will help us overcome our difficulties as we look to better days ahead."

The plan still has to be accepted by parliament but it paves the way for a formal request with the international lender and negotiations with eurobonds creditors. Lebanon, one of the most highly indebted nations in the world, defaulted for the first time in March on its sovereign debt.

The government's plan was finalized following several days of confrontations between protesters and Lebanese security forces that saw dozens of angry youth vandalize local banks in the northern city of Tripoli and the southern port city of Sidon.

The violence left one protester dead and several injured on both sides in some of the most serious anti-government rioting amid a weeks-long coronavirus lockdown. Politicians have traded blame over who is responsible for the crisis, the worst since Lebanon’s 15-year civil war ended in 1990.

“We will proceed with requesting a program from the International Monetary Fund, formalizing our negotiations with Eurobond creditors and moving forward, thereby reducing the debt burden on our citizens," Diab also said.

Lebanon's economic crisis, rooted in decades of corruption and mismanagement, deepened after nationwide protests against the political class erupted in October. Meanwhile, banks have imposed informal capital controls, limiting withdrawal of dollars, and the cash-strapped government announced in March it is defaulting on its sovereign debt for the first time. The virus lockdown has thrown tens of thousands of people into further poverty and unemployment.

Most are now looking to the IMF, hoping the economic rescue plan opens the door for talks of financial assistance. So far the IMF has only offered Lebanon technical assistance as the government has not formally sought financial support.

Panic and anger have gripped the public as they watched the national currency, the Lebanese pound, which has been pegged to the dollar for almost three decades, plummet, losing more than 60% of its value in recent weeks. Public debt has soared while the economy contracted and foreign inflows dried up.

The tiny Mediterranean country of about 5 million people is one the most indebted in the world, with the national debt forming nearly 170% of the GDP.

Diab said the five-year plan aims to reduce the current account deficit to 5.6% and to secure $10 billion of external support — in addition to the $11 billion pledges in 2018 by international donors.

The plan also envisions that growth would return to positive in 2022 and promises assistance for the needy. The plan also aims to restore an initial budget surplus by 2024, structuring the sovereign debt portfolio and reducing the ratio of public debt to GDP to less than 100 % from the current 170%.

Diab’s government came to office in January after his predecessor, Saad Hariri, stepped down in the face of mass protests. But the new Cabinet quickly became embroiled in a nationwide health crisis over the novel cornavirus.

Although made up mostly of technocrats, the Cabinet is seen as one-sided, backed solely by Hezbollah and its allies. Diab lacks political support from his own Sunni community as well as other key politicians. Any IMF program is bound to bring with it painful measures, and it is not clear if Diab's government would be able to weather the storm.

"If we all unite, we will definitely reach the desired success in the future,” he said.