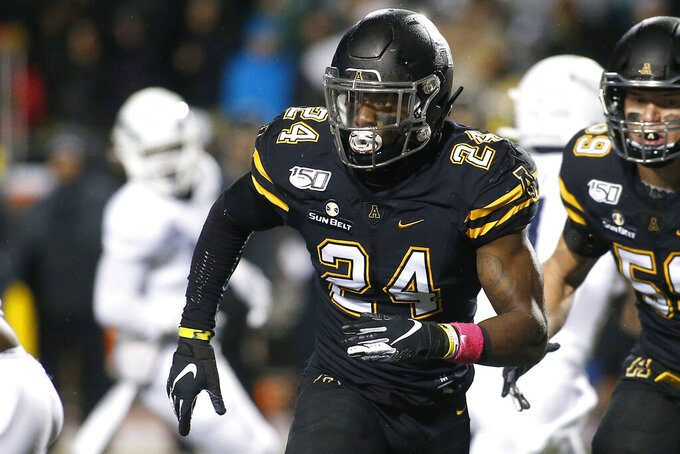 Maybe the Southeastern Conference should simply hold onto its players and become part of the NFL.

The home of national champion LSU and perennial contenders Alabama, Georgia and Auburn, the SEC dominated the first four rounds of the NFL draft before the flow of talent slowed to a trickle. Or the conference finally began running out of top prospects.

The top four rounds are where the vast majority of pro starters are found. So beginning with LSU quarterback Joe Burrow, who went first overall to the Bengals, the SEC provided the mother lode. And by the time this virtual/remote/digital draft — make your own choice — was over, 63 players had come from its 14 teams — well, 13, because Ole Miss was ignored. LSU sent 14, tying the most in a seven-round draft, followed by Alabama with nine. Not quite a record, because the SEC had 64 selectees a year ago. But this grab bag was further proof of its place atop college football.

“I think it’s really easy to see NFL players when you watch as many players get drafted from the SEC and from that conference,” Titans coach Mike Vrabel said after his team grabbed Georgia tackle Isaiah Wilson and LSU cornerback Kristian Fulton. “But there’s great players in every conference. It’s just you don’t have to look too far to see them play against some really talented players.”

“The SEC, I would argue, is one of the top one or two conferences in college football. I think a lot of people say it is the best conference," Detroit general manager Bob Quinn said. “The competition that’s in that conference — from LSU to Alabama to Auburn to Georgia to all those schools — and some of the other teams have really, really good players. So the level of competition, they get the high recruits, they really do.”

Nearly every NFL club will have an LSU Tiger or member of the Crimson Tide on its roster by next week.

As the third day of this unusual draft concluded, it became clear that concerns about communication problems cropping up were vastly overblown. Clunky at times, poignant at others, and exceptionally entertaining in spots, the draft has done what Commissioner Roger Goodell hoped.

Sure, there were awkward moments, but those come even when the draft is a mega-event drawing hundreds of thousands of fans to the “Rocky Steps” in Philadelphia or lower Broadway in Nashville.

Goodell has insisted the sporting world needed the draft to be held on time. And the amount of eyeballs watching has been, well, an eye-opening number. Late in Saturday's final round, the league said it had gone over $100 million in total funds raised in all its efforts to battle the coronavirus. The telethon accompanying the draft raised more than $6.6 million for six organizations involved in coronavirus relief.

NFL general managers also put together donations, initiated by the Eagles’ Howie Roseman, with each giving at least $8,000 for every selection in this draft.

The NFL matched every telethon donation on Friday and Saturday.

“We’re forced to adapt here and change and do this differently, but it’s actually been a lot of great learning,” Goodell said. “We’ve seen some things that we’ve maybe called ‘stumbled on’ that really, I think, will be elements of drafts going into the future. The ability to use the virtual platforms in a way that we really didn’t think about until we were forced to.

"And so I think we’re really going to able to make future drafts even better because we’re going to be able to combine it with the core elements that we’ve had. But I think that’s one of the things about the draft, it just keeps evolving and it keeps getting better because we keep learning.”

The league even awarded the 2022 draft to Las Vegas after all events on the Strip for this year were canceled due to the nationwide shutdown of large gatherings to curb the spread of the virus.

To open Saturday, Appalachian State had its second player chosen, linebacker Akeem Davis-Gaither, who went to Cincinnati. The Sun Belt’s defensive player of the year was a standout at the Senior Bowl — a game the Bengals coaching staff worked.

The Redskins dealt their unhappy veteran tackle Trent Williams to San Francisco on Saturday morning, and then chose LSU's Saadiq Charles, who has been plagued by off-field issues and served a six-game suspension.

The Niners, who later announced the retirement of longtime standout left tackle Joe Staley, sent a fifth-round pick in this year’s draft and a 2021 third-rounder to acquire Williams. The deal reunites him with 49ers coach Kyle Shanahan, who was the offensive coordinator in Washington when Williams was drafted fourth overall in 2010.

San Francisco made two other trades, first sending Matt Breida, who was the Niners' starting running back for part of their NFC title season, to Miami. The Dolphins dealt a fifth-rounder to San Francisco.

Then the 49ers traded wideout Marquise Goodwin to Philadelphia for a swap of sixth-round spots.

The first quarterback chosen on Day 3 was Washington's Jacob Eason, who went to Indianapolis. The Colts, of course, signed Philip Rivers as a free agent and still have incumbent Jacoby Brissett. Both have contracts only through 2020, though.

Eason lost out to Jake Fromm at Georgia, then transferred to Washington. Fromm finally went 167th overall to Buffalo, which has a young QB in Josh Allen. Fromm likely was hurt by a mediocre combine performance. He was taken well after the Jets got Florida International QB James Morgan at 125th.

Carolina pulled off a new one by choosing nothing but defensive players, seven in all. Including, naturally, the seventh overall choice, DT Derrick Brown of Auburn. Of the SEC.

Wide receiver was considered the deepest position in this crop, and 37 were taken.