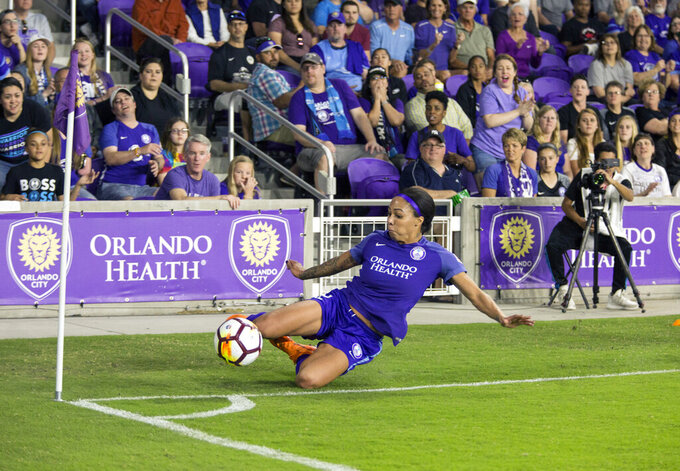 The veteran forward has signed a three-year max deal with the Orlando Pride, the National Women's Soccer League team she's been with since 2018. Announced Wednesday, the contract has an option for an additional year.

“Being a mom of two and a woman, I think we can do it all. And I hope that I’ve proved that to girls and women and moms every single day,” she said. “I think that I still have so much more to give. And I think if you were on the field with me, you would say the same. So, no, I’ve not really thought of retiring. I enjoy having my kids see what their mom can do and see their mom chase her dreams, still.”

Now 30, Leroux has played in the NWSL since its inaugural season in 2013, first with the now-defunct Boston Breakers. She also had stints with the Seattle Reign, the Western New York Flash and FC Kansas City.

“I think it’s easy for a coach, especially when the player signs, to be overly enthusiastic because there may be a need to do that, but this is absolutely genuine: What you get with Sydney is everything,” Pride coach Marc Skinner said. “It’s the grit, the guile, the determination -- and that’s just the mentality side.”

Like other league players, Leroux has had to deal with tumultuous times. The worsening pandemic forced the NWSL to suspend the season before it started last year. The Pride were then set to join the league's teams in the Challenge Cup tournament in Utah last summer but a number of positive COVID-19 tests forced the team to withdraw.

Orlando was able to play in the league's limited fall series. Leroux had eight shots, including five shots on goal, and a goal in the team's four games.

“I don’t want Sydney to return to what she was. I want her to be better and a better version of herself because she’s more mature. The life experience she has is vast. So I am genuinely excited," Skinner said. "I love Sydney to bits and I think that she’s a super positive impact on the team, not only from a playing perspective, but also from her as a person."

Leroux said a long-term contract appealed to her.

The team recently opened training camp for the league's upcoming ninth season. The NWSL will play a preseason Challenge Cup tournament in local markets before the start of the regular season on May 15.

Leroux is looking forward to playing with Marta and Morgan, who missed last season because of the birth of her daughter, Charlie. The two are part of a small group of moms who play in the NWSL.

“I mean, me and Alex have been playing together since we were like 16 years old. But we’ve never really truly played together properly,” Leroux said. “This year will be exciting.”