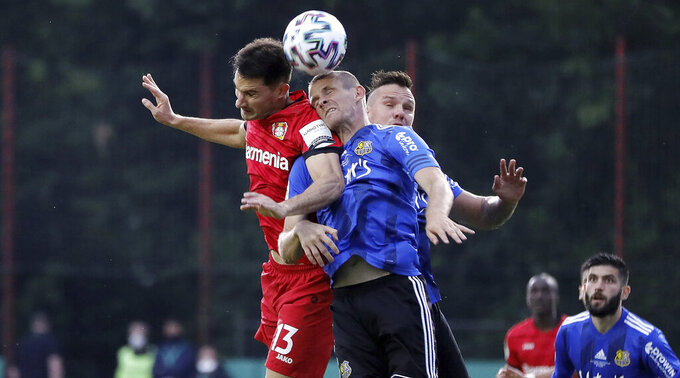 VÖLKLINGEN, Germany (AP) — Fourth-division Saarbrücken's record-breaking run to the German Cup semifinals came to an end with a 3-0 loss to Bayer Leverkusen in an empty stadium on Tuesday.

The coronavirus pandemic deprived Saarbrücken of the home crowd which had roared on its team as it knocked out four clubs from higher divisions, becoming the first club from such a low league to reach a cup semifinal.

In its first German Cup final since 2009, Leverkusen will face the winner of Wednesday's semifinal match between Bayern Munich and Eintracht Frankfurt. Leverkusen can win its first trophy since 1993 in the final in Berlin on July 4.

German soccer's strict hygiene protocols, including face masks for substitutes, were forgotten as Leverkusen celebrated the win. Players and staff posed for photos in a huddle in the dressing room and chanted: “We're going to Berlin.”

Saarbrücken had to win a regional cup last year to even qualify for this season's German Cup. It was playing for the first time since March because its season in the South-West Regional League was abandoned amid the pandemic. The defense showed signs of rust for Leverkusen's goals.

First Kerem Demirbay played a pass over the top for Moussa Diaby to sprint behind Saarbrücken's static defense and jab the ball into the net. Lucas Alario was gifted the second goal when Saarbrücken's goalkeeper and defender misunderstood one another and collided when trying to intercept a cross.

Karim Bellarabi made it 3-0 in the 58th after the Saarbrücken defense hesitated too long in clearing the ball. Leverkusen dominated the game with 80 percent possession as the host team sat deep.

“We gave everything we had," Saarbrücken goalkeeper Daniel Batz said. “We know we’ve done a lot for ourselves, for the club and for the fans.”

Saarbrücken's stadium was being refurbished so the team played in a nearby venue with stands on only two sides of the field and trees behind the boards on one touchline.

“The conditions didn’t match up to what we’re used to, so it was important that we stayed focused," Leverkusen's Sven Bender said.

German fan groups have frequently protested against the game's governing body since the Bundesliga restarted last month in empty stadiums, accusing it of prioritizing big teams' finances over the health of the game as a whole. Saarbrücken's supporters were no different.

“Empty stands, full cash registers,” one large banner read in a message aimed at the German soccer federation and the Bundesliga's governing body. "Your business is still ill.”

Saarbrücken will play in the third division next season after the decision was taken last month to decide its league by points per game.

That ensured promotion for Saarbrücken, which is based near Germany's border with France and briefly played in the French league system following World War II. The club played top-division football in Germany for spells of the 1960s, 1970s and 1980s, but hasn't featured in the Bundesliga since 1993.