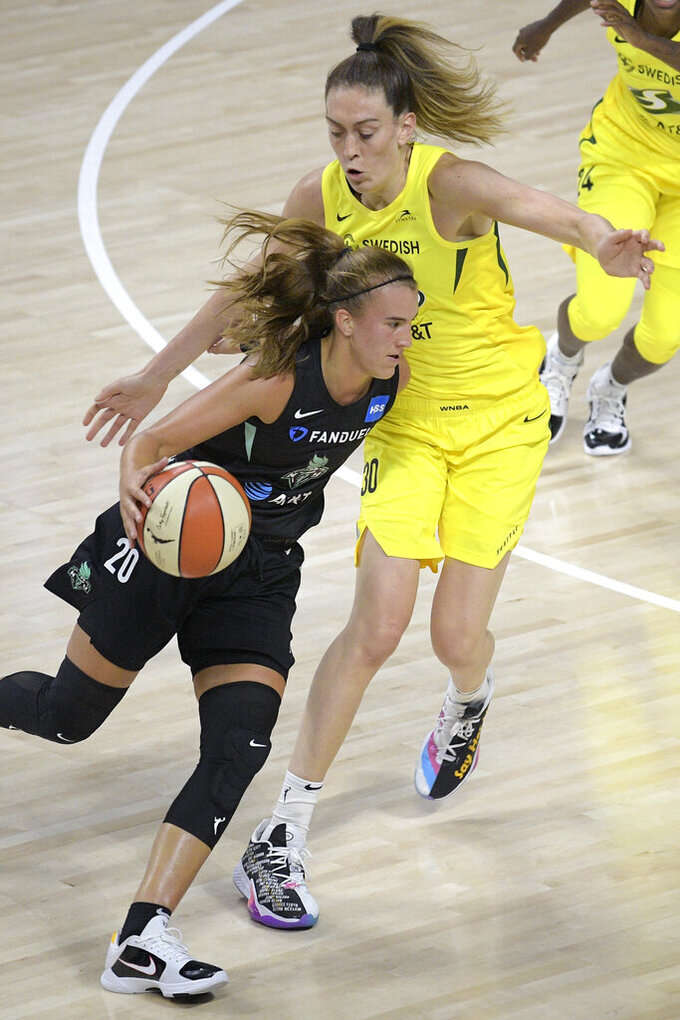 Sabrina Ionescu's rookie season could be over just as it was getting started.

The No. 1 pick in the WNBA draft was diagnosed with a Grade 3 left ankle sprain after getting hurt in the second quarter against Atlanta and did not return to action in the New York Liberty’s 84-78 loss to the Dream on Friday night.

X-rays taken at a hospital came back negative, but an MRI revealed the sprain according to the team. A Grade 3 sprain is the most severe and usually requires months to heal fully as it's a full tear of the ankle ligament. This level of sprain causes severe pain, swelling and bruising.

A group of doctors have been attending to the injury. They are trying to get the swelling to decrease and increase her range of motion, according to the Liberty.

Ionescu was bringing the ball up court and rolled her left ankle when she got tangled up with Atlanta's Betnijah Laney with about five minutes left in the opening half. She finished with 10 points on 4-of-5 shooting.

LeBron James tweeted out after seeing the injury his well wishes to Ionescu to get healthy. Ionescu said in her diary for The Associated Press that James, among other NBA players, had reached out to her after her first game of the season.

Ionescu played in only 2 1/2 games this season and might be hard-pressed to return with the WNBA playing a truncated season with only 19 games left over the next 6 weeks.

New York is short-handed at guard already with Kia Nurse sidelined with a sprained left ankle she suffered in the team's opener. Asia Durr, the No. 2 pick last year, is out for the season on a medical exemption after contracting the coronavirus.

“We’re gonna have to huddle up and talk about it,” Liberty coach Walt Hopkins said after the loss. “There’s not a lot of ready-to-go options hanging around. See if we can get Kia right."

Ionescu had been pretty durable in college for Oregon, only missing four games her freshman season. She played every game after that en route to shattering the NCAA career triple-double mark (for both men and women) with 26 and became the first player in college history to have 2,000 points, 1,000 rebounds and 1,000 assists.

The WNBA had set up a “clean corridor” according to league commissioner Cathy Engelbert. That way players who needed an X-ray or an MRI could go to a hospital to receive care without having to go back into quarantine when they returned to IMG Academy in Florida where all the games are being played this season because of the pandemic.

The Liberty are 0-3 on the season and will play again Sunday against Phoenix.