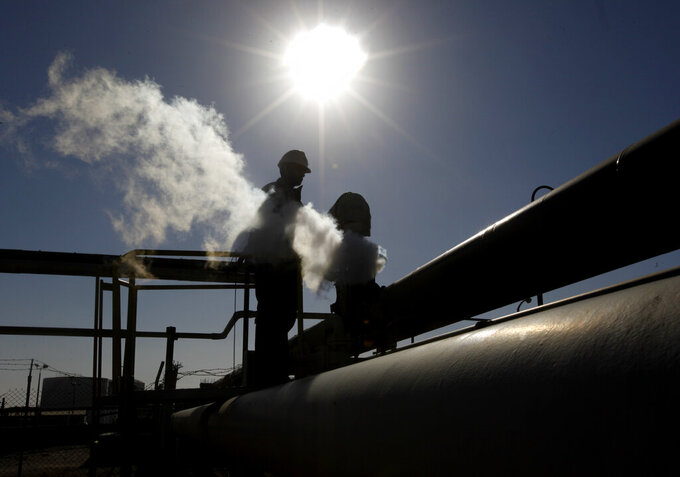 FILE - In this Feb. 26, 2011 file photo, a Libyan oil worker, works at a refinery inside the Brega oil complex, in Brega, eastern Libya. ON Saturday, Jan. 18, 2020, the National Oil Corporation in Libya says that a decision by east-based forces to choke off oil exports from its territory has threatened to throttle much of the country’s oil production. Powerful tribal groups loyal to Gen. Khalifa Hifter, whose forces control much of eastern Libya, seized several large export terminals along the eastern coast as well as southern oil fields in a challenge to the rival U.N.-backed government based in Tripoli, which collects revenues from oil production. The move has ratcheted up tensions ahead of an international peace summit to end the civil war. (AP Photo/Hussein Malla, File)

CAIRO (AP) — Russian and other foreign mercenaries have entered Libya’s largest oil field, the country's National Oil Corporation said on Friday, describing the development as an attempt to thwart the resumption of halted oil production in the war-torn country.

In divided Libya, Russia is a leading backer of the east-based forces led by commander Khalifa Hifter, who has been waging war against the U.N.-supported government in the capital, Tripoli, which is mainly backed by Turkey.

The Russian mercenaries first met late on Thursday with the guards of Libya’s vast southwestern Sharara oilfield, controlled by Hifter's eastern-based fighters, according to a statement from the National Oil Corporation, or NOC.

Earlier this year, a militia known as the Petroleum Facilities Guard, which takes orders from Hifter’s forces, helped shut down oil production when Hifter-allied tribes led a blockade of Libya’s oil ports — a challenge to the Tripoli administration.

While Hifter’s east-based forces control Libya’s oil crescent, the Tripoli government in the west controls the national Central Bank reserves, mostly drawn from oil income. Although Libya has Africa’s largest oil reserves, it has been unable to export oil since Hifter's blockade started in January, costing the state corporation over $6 billion in lost revenue. Libya’s was producing over 1.2 million barrels per day before the shutdown.

“While foreign mercenaries continue to be paid vast sums of money to prevent the NOC from carrying out its essential duties, the rest of the Libyan population suffers,” said Mustafa Sanalla, the corporation’s chairman. He lamented the loss of oil revenues and the “disastrous decay of our oil infrastructure” due to the shutdown, which is preventing maintenance work at facilities.

The Russian mercenaries are said to be employed by the Wagner Group, a Kremlin-backed private security company. The group has provided between 800-1,200 mercenaries to bolster Hifter’s 14-month offensive to capture Tripoli, according to U.N. experts, paying some fighters up to $1,500 a month. Moscow has repeatedly denied playing any role on Libya’s battlefields.

Hifter’s campaign largely collapsed earlier this month when Turkish-backed forces allied with the Tripoli government regained control of the capital’s entry and exit points and drove their rivals from a string of western towns. Turkey, the main patron of Tripoli forces, has also deployed mercenaries, mainly from Syria, to help defend the capital from Hifter’s assault.

Tripoli forces now say they’re mobilizing to retake Sirte, a strategic coastal city that would open the gateway to Libya’s vital oil fields and facilities. Hifter and his foreign backers, including Egypt, Russia and the United Arab Emirates, have pushed for a return to peace talks to avert a major escalation in the proxy war. Egypt last week warned that an attack on Sirte would trigger its direct military involvement in the conflict.

With global oil prices hitting historic lows because of the coronavirus pandemic and OPEC countries agreeing to slash production, Libya’s oil corporation has sharply criticized what it describes as the international community’s indifference to the shutdown.

“It is noteworthy that many countries are themselves benefiting from the absence of Libyan oil from global markets,” said Sanalla, the chairman. Some states, he added, are “working in the background to support blockading forces,” in reference to Russia.

The U.S. Embassy in Libya condemned the occupation by the oilfield by Wagner and other foreign mercenaries as part of “an unprecedented foreign-backed campaign to undermine Libya’s energy sector.”

Foreign powers meddling in oil-rich Libya are holding the country's lucrative resources “hostage,” the embassy said, while ordinary Libyans continue to suffer from a crumbling economy.