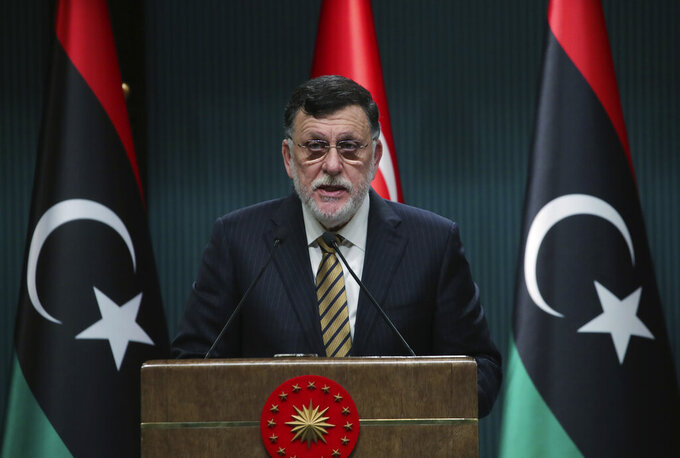 FILE - In this June 4, 2020 file photo, Fayez Sarraj, the head of Libya's internationally-recognized government, speaks at a joint news conference with Turkey's President Recep Tayyip Erdogan, in Ankara, Turkey. Libya’s U.N.-supported government Friday, Aug. 21, 2020, announced a cease-fire across the oil-rich country and called for demilitarizing the strategic city of Sirte, which is controlled by rival forces. (Turkish Presidency via AP, Pool)

CAIRO (AP) — Libya’s Tripoli-based government has suspended its interior minister following a shooting at a demonstration in the capital earlier this week, the United Nations-supported government said Friday.

Interior Minister Fathi Bashaga will face an investigation over ‘violations’ committed against protesters, the government said in a statement.

On Sunday, at least six people were abducted and others wounded when armed men in military uniforms opened fire on a demonstration in Tripoli against deteriorating economic conditions, according to a Wednesday statement by Amnesty International.

At the time, the Interior Ministry accused “outlawed infiltrators” of firing at the protesters on Sunday and said an investigation was opened. Bashaga later acknowledged that a Tripoli-allied militia fired live ammunition at peaceful protesters. He said in a statement early Thursday that a militia, which he did not name, opened fire and abducted some of the protesters.

Militias have featured heavily in the country’s civil war, with the U.N.-supported government employing an array of militiamen to fight their rivals in the east. They have proved difficult for the Tripoli government to control in the past.

Tripoli and other territories under the U.N.-supported government saw a series of protests starting last week over deteriorating economic conditions.

Prime Minister Fayez Sarraj had said in televised comments Monday that the protesters did not have a permit for their gathering. He also announced a 24-hour curfew lasting four days to fight the coronavirus, a move that protesters believe was meant to keep them from rallying. Protesters did not turn out on Friday for an announced demonstration amid a high security presence.

Libya has seen a surge in coronavirus infections in recent weeks, with most of the cases in the country’s west. So far, authorities have reported more than 12,629 cases, including 226 deaths, though the actual numbers are thought to be far higher, in part due to limited testing.

The pandemic has worsened the economic situation for many in the oil-rich the country, already torn by years of conflict.

Oil-rich Libya was plunged into chaos when a NATO-backed uprising in 2011 toppled longtime dictator Moammar Gadhafi, who was later killed. The country is now split between rival east- and west-based administrations, each backed by different armed groups and foreign governments.