Lightning among losers, Flames with winners in free agency 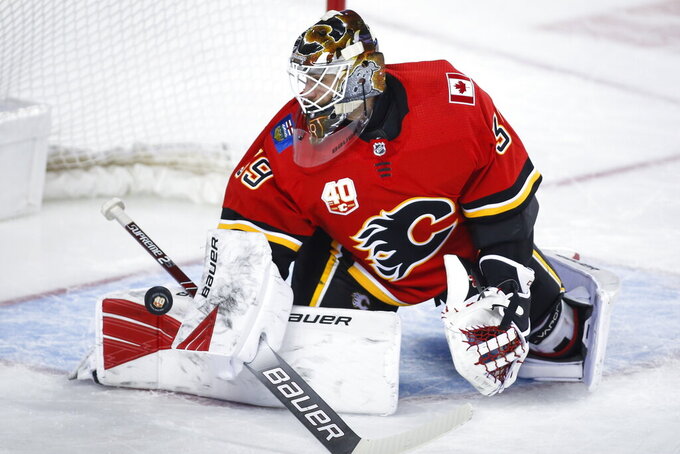 The Tampa Bay Lightning won the Stanley Cup and lost a lot on Day 1 of NHL free agency.

The Lightning simply could not afford to keep a trio of role players: defenseman Kevin Shattenkirk, center Tyler Johnson and center Carter Verhaeghe.

Johnson was put on waivers while Shattenkirk and Verhaeghe left the Lighting as free agents Friday.

As much as Tampa Bay may have wanted to keep each player, the COVID-19 pandemic has forced teams to make tough choices because they don't know when fans will be in the stands to generate revenue needed to pay the bills with a flat salary cap.

Johnson, who had seven points in 25 playoff games, had three years remaining on a seven-year, $35 million contract that includes a no-trade clause. Shattenkirk agreed to a three-year deal with the Anaheim Ducks and a person familiar with the situation told The Associated Press the contract will pay him $11.7 million. The person spoke on the condition of anonymity because the deal has not been announced. Carter, meanwhile, stayed in the state by agreeing to a two-year contract with the Florida Panthers.

Here's a look at who appeared to win and lose on opening day of free agency:

The Calgary Flames improved their chances of advancing in the playoffs for the first time since 2004 by adding perhaps the best goaltender on the market. The Flames beat out the competition for Jacob Markstrom with a $36 million, six-year deal. The 30-year-old Markstrom was an All-Star last season and finished fourth in voting for the Vezina Trophy.

Alex Pietrangelo and Taylor Hall would've likely agreed to lucrative deals in the opening hours of free agency if they hit the market in any other time. This year, though, both two-time All-Stars were still available late Friday night.

Pietrangelo has spent his entire 12-year career with the St. Louis Blues, who drafted him No. 4 overall in 2008. But it appears his time with the franchise ended when defenseman Torey Krug signed a $45.5 million, seven-year deal.

The 28-year-old Hall won the NHL MVP award just two years ago and has 218 goals over his 10-year career, making him an attractive option for a team that can afford to add him.

While there were fewer deals done on the opening day of free agency, many teams made it a priority to add or retain a goaltender.

The Canucks tried to make up for losing Markstrom by adding Braden Holtby with an $8.6 million, two-year deal. Henrik Lundqvist signed a one-year contract with Washington, two weeks after having his contract bought out by the New York Rangers.

The Montreal Canadiens wanted to get bigger, tougher and harder to play against. They tried to sign winger Wayne Simmonds, but the Canadiens were forced to watch Simmonds take less money to sign with his hometown Toronto Maple Leafs.

Bobby Ryan hopes to become a feel-good story by reviving his career after turning his life around. He agreed to a $1 million, one-year contract with the Detroit Red Wings after missing more than two months last season while addressing alcohol issues.

The 33-year-old winger is shooting to regain the form he had a decade ago as one of the NHL's top scorers, aiming to turn a productive season into a bigger and longer contract.