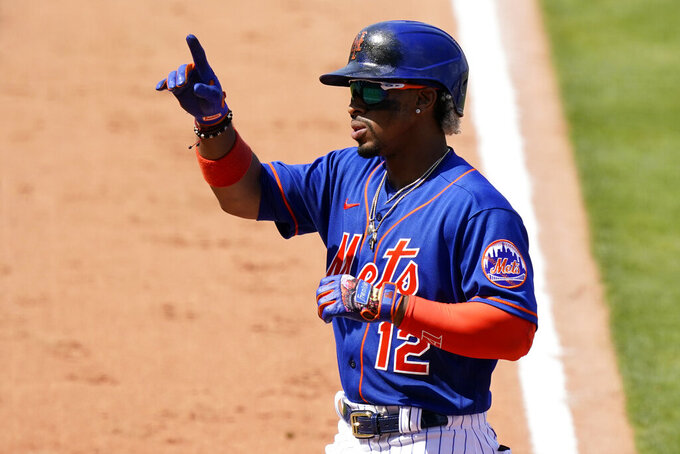 Just over two weeks before opening day, Francisco Lindor and the New York Mets have begun talking about keeping him in town beyond this season.

The newly acquired All-Star shortstop and the team have started discussing a long-term contract, he said Tuesday.

“I will not renegotiate during the season,” Lindor said after hitting his first home run this spring, connecting against Houston’s Jairo Solis during the Mets’ 8-3 win.

The Mets obtained Lindor from Cleveland in January, and he's signed for this season at $22.3 million.

The 27-year-old Lindor was an All-Star for four straight seasons before 2020, when there was no Midsummer Classic before of the coronavirus pandemic.

One of the players Cleveland got for Lindor, shortstop Amed Rosario, had a rough day in his debut at a new spot.

Playing center field for the first time, Rosario made three errors — two drops, one wild throw — in a game against the Los Angeles Angels. Rosario's four years in the majors include just one game in the outfield, and that was only for three innings in left.

The Indians, with enough infield talent, are hoping to take advantage of Rosario's athleticism. Rosario got two hits but as manager Terry Francona said earlier in the week, they've got to patient in seeing if the newcomer can play center field.

Shohei Ohtani hit his third home run in two days for the Angels and fourth of the spring, launching a shot that cleared the batter’s eye in center field off AL Cy Young winner Shane Bieber.

Bieber allowed nine runs, but only one earned after the errors by Rosario.

“I talked to him after the third inning, once I was done. I told him, ‘Listen, man, this stuff’s hard. Don’t get down on yourself. Keep your head up,'" Bieber said.

Griffin Canning recorded five strikeouts over four innings in the start for the Angels, allowing two runs on five hits and a walk. Canning now has 13 strikeouts in 7 2/3 innings. Albert Pujols doubled and singled.

Pete Alonso hit his third homer and Dominic Smith also connected. Jeff McNeil had an RBI double to end a 1-for-21 slump.

Houston star Alex Bregman played his first game this spring after recovering from a hamstring issue. He struck out his first time up, was robbed of a two-run homer by center fielder Brandon Nimmo and finished 0 for 3.

Kershaw started and gave up home runs to the first two batters he faced, Kolten Wong and Luis Urías. The left-hander allowed five runs and eight hits over four innings.

Bauer took over and struck out seven over the final five innings, giving up two runs on three hits, two of them homers.

Josh Lindblom worked 3 2/3 shutout innings in the start for Milwaukee, striking out four and walking three. Josh Hader allowed a hit and struck out two in an inning of relief. Luke Maile and Billy McKinney also homered.

Carlos Rodón worked three one-hit innings in the start for the White Sox, striking out four. Reynaldo López went three innings in relief, allowing two runs on four hits and a walk. Nick Madrigal played in his second Cactus League game after having his left shoulder repaired surgically in the offseason and went 0 for 3.

Joe Musgrove struck out four over his four-inning start, allowing three hits, a pair of walks and a run on a wild pitch. Mark Melancon gave up one hit in his inning of relief.

Lowrie got his first hit of the spring. He's made just eight plate appearances over the last two years while suffering two significant knee injuries

Jesús Luzardo allowed six runs on five hits and a walk in 2 1/3 innings for Oakland.

Gerrit Cole made his third start for New York, yielding two runs on three hits and a walk in 3 2/3 innings, striking out five. Clint Frazier had three hits, including a home run. Gio Urshela had two hits and Mike Tauchman homered.

The Blue Jays picked up the option for manager Charlie Montoyo's contract for 2022. After going 67-95 in his first season, Toronto went 32-28 last year and made the expanded playoff field.

Philadelphia ace Aaron Nola was knocked around for the third straight time, giving up six runs on seven hits and two walks in 2 2/3 innings. Nola has given up 15 hits in 8 2/3 innings, seeing his ERA rise to 10.38. Jean Segura had a two-run single and Andrew McCutchen hit his third double.

Michael Chavis had an RBI double and Christian Vázquez doubled and walked for Boston. Tanner Houck started and allowed three runs on three hits and four walks in 2 2/3 innings.

Félix Hernández made his second start for Baltimore and pitched a scoreless innings before exiting because of discomfort in his right elbow. The 34-year-old former AL Cy Young Award winner opted out of playing last season because of coronavirus concerns.

José Berríos allowed one run in each of the four innings he pitched in his third start for Minnesota, surrendering eight hits and a walk. Josh Donaldson had two hits. Leadoff man Max Kepler went 0 for 3 and is batting .087.

Victor Robles and Josh Bell homered for the Nationals, and Kyle Schwarber had an RBI double. Daniel Hudson struck out three in a hitless inning.

Justus Sheffield had an impressive outing for Seattle, pitching four innings of two-hit ball with six strikeouts. Touted prospect Julio Rodriguez homered, and the Mariners got two-run shots from Ty France and Tom Murphy. Sam Haggerty had three hits, including an RBI triple and a run-scoring double.

Kansas City starter Brad Keller was knocked around for six runs (five earned) and six hits in three innings. He walked three. Veteran right-hander Brad Brach followed and was hammered for five runs and six hits, including two homers, while getting only one out.

Ryan McMahon had two hits and three RBIs, and Connor Joe and Yonathan Daza homered for Colorado, with Daza collecting four hits. The Rockies beat up on a few veteran pitchers, scoring four runs in three innings against Reds starter Wade Miley and getting three more in the fifth off Sean Doolittle. Tyler Naquin and Alex Blandino homered for Cincinnati.