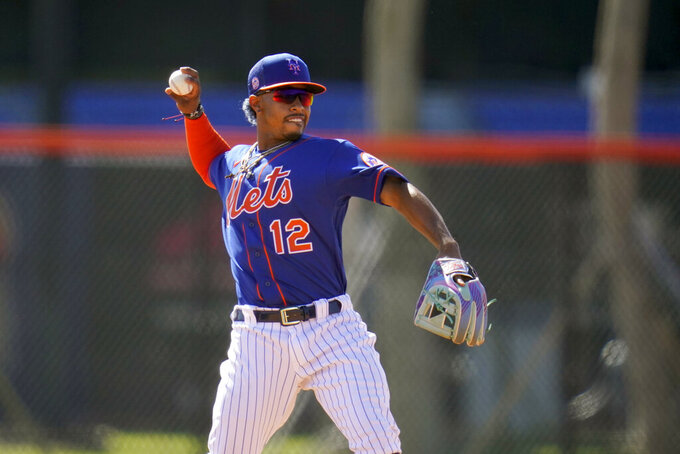 “You’ve got to practice it if it’s going to happen, you know?” slugger Pete Alonso said with a chuckle. “We were having fun, but you’ve got to have a vision and make it a goal before it turns into reality.”

While the Mets are hardly the first team to try that Jedi mind trick, they might be among the most presumptuous.

New York went 26-34 during the pandemic-curbed 2020 season, tied for last in the NL East, and missed the playoffs for the fourth straight year. The Mets have only three winning seasons in the past 12, and one pennant in the last two decades. The most recent of their two titles came in 1986.

But a top-to-bottom offseason overhaul under new owner Steve Cohen wrought changes everywhere from the front office to the back of the rotation and the last spot on the bench. The biggest prize was Lindor, the superstar shortstop acquired from Cleveland along with right-hander Carlos Carrasco in a blockbuster trade. All-Star catcher James McCann signed as a free agent, and New York filled rotation holes by bringing back hometown righty Marcus Stroman and adding newcomer Taijuan Walker.

With one of baseball's most dominant pitchers already in the fold, two-time Cy Young Award winner Jacob deGrom, the Mets certainly look like contenders.

“We can play," Lindor said.

Preseason plaudits are nothing new, though. For a couple of years now, New York has boasted a dangerous lineup and quality players at the top of the roster.

It hasn't yielded much success on the field.

“I think this is the most talented team that we’ve had in a long time,” said outfielder Michael Conforto, taking on a larger leadership role. "But there always seems to be this hype around either our pitching staff or the young hitters that we have, or whatever it may be. And I've seen that, you know, it's not that we didn’t work hard, but you can fall into this mode of thinking that you’re better than you are. And you're not good unless you win a lot of games — that's just plain and simple. And we haven't done that yet.

“It’s easy to see the talent that we have, but I think it’s important that we don’t allow that talent to be our worst enemy,” he added. “I think a lot of times, talent can make you complacent. ... We need to put in the work."

The difference this season, the Mets believe, is a better backup plan for injuries and inevitable hiccups.

Under new team president Sandy Alderson, who was New York's general manager from 2010-18, the club placed a long-overdue focus this winter on building depth in every area. While the Mets missed out on premium free agents Trevor Bauer, George Springer and Brad Hand, veteran reserves such as outfielder Kevin Pillar, infielder Jonathan Villar and center fielder Albert Almora Jr. were acquired, along with viable fill-in options on the mound like Joey Lucchesi and Jordan Yamamoto.

Noah Syndergaard is targeting a June return to the rotation after sitting out last season following Tommy John surgery. Stroman accepted an $18.9 million qualifying offer to return for one year after missing the start of last season with a calf injury and then opting out due to COVID-19 concerns.

Offensive sparkplug Jeff McNeil shifts back to second base, probably his most natural position, because Robinson Canó was suspended for 162 games by Major League Baseball after testing positive for a performance-enhancing drug for the second time during his decorated career.

There are 18 newcomers on the 40-man roster, a big reason computer-based projection models peg the Mets as favorites in a rugged division ruled by three-time defending champion Atlanta.

“This is going to be a big year for us,” Alonso said. “It’s going to be a challenge but I think that we’re extremely depth-y and we can win in a lot of ways on offense."

That depth could be tested immediately, with Carrasco slowed this spring by a sore arm and valuable right-hander Seth Lugo likely out until at least May following surgery to remove a bone spur from his pitching elbow. New bench bat José Martínez is expected to miss about four months with a knee injury.

New York was one of baseball's worst defensive teams last year, and while Lindor and McCann provide upgrades, J.D. Davis presents a question mark at third base and the lack of a designated hitter in the National League this season makes breakout bopper Dominic Smith, a first baseman by trade, an indisputable liability in left field.

“While some of our players aren’t defensive geniuses, we think that the overall blend that we have is pretty good,” Alderson said.

LATE IN THE EVENING

The bullpen got augmented, but middle-relief issues remain. New reliever Trevor May was signed to help set up closer Edwin Díaz, who was much better last season after a miserable Mets debut in 2019.

Lindor, Conforto, Syndergaard and Stroman can all become free agents following this season. Meanwhile, deGrom turns 33 in June and can opt out of his contract after 2022. The team is in talks with Lindor about a long-term deal, but he says he won't negotiate during the season. Conforto could be on deck.