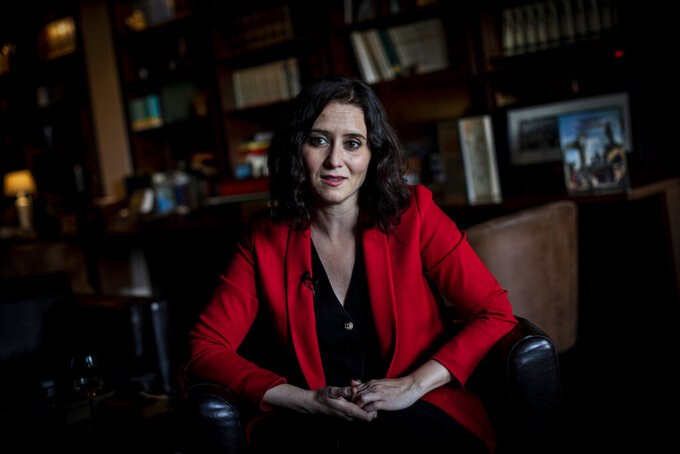 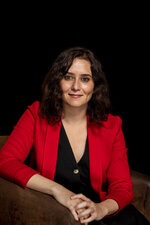 MADRID (AP) — Hailed as a flag-bearer of Spain's anti-lockdown movement, the chief of the country's capital region turned Madrid this year into a European exception, where bars, restaurants, museums and concert halls remained open even as contagion rates strained hospitals.

Madrid President Isabel Díaz Ayuso's resistance to sweeping closures and preference for treating COVID-19 patients in cavernous venues have constantly pitched the 42-year-old conservative against Spain's left-wing ruling coalition. The political strife, which has involved boasts, blame and lawsuits, has escalated in the run-up to a regional election on May 4.

“I'm facing an exam,” Díaz Ayuso, the election frontrunner, told The Associated Press this week. “It’s like asking ‘Do you like what I’ve done until now?’ Well, then give me a broader majority so I can manage things with more strength.”

Díaz Ayuso called the election two months ago, when coronavirus cases were plateauing from a post-Christmas peak but hospitals in Madrid were reeling - they still are - from a persistent flow of COVID-19 patients. While surprising, her decision came as a natural end to her Popular Party's testy relationship with the liberal Citizens party, the junior partner in Madrid's governing coalition’.

“The government's mind and heart just weren't in the same place,” Díaz Ayuso said of the disputes that soured relations within the coalition during the pandemic.

The public health crisis nonetheless has helped transform Díaz Ayuso from an inexperienced politician who raised eyebrows with off-the-cuff comments in front of cameras to a defiant figure and scourge of Prime Minister Pedro Sánchez, the leader of the Spanish Socialist Workers' Party.

Along the way, she earned as much support as hatred. Constituents once seduced by the populism of Vox, an upstart far-right party imbued with Spanish nationalism, have added to her popularity. The left loathes her.

“(Díaz) Ayuso seems more the candidate of the far-right than (Vox candidate Rocío) Monasterio," said Pablo Iglesias, the leader of the anti-austerity United We Can party.

Iglesias quit his Cabinet position as a deputy prime minister in late March to run in the Madrid election on an “antifascist” ticket. Ayuso, who had characterized the election as a plebiscite between her and Sánchez, initially choosing “Socialism vs. Freedom" as her informal campaign slogan, welcomed Iglesias into the race tweeting “Communism vs. Freedom.”

The fast-rising star of Spain’s conservative camp seems posed to cause a tectonic change in Spanish politics. If her divisive style pays off, her Popular Party could win an absolute majority in the 136-seat regional parliament. Few polls predict that scenario, but support for Díaz Ayuso has grown throughout the campaign, placing her in a stronger position from which to undercut Vox's success and to silence the voices of moderation within her own party.

If the Popular Party falls short of securing 69 seats, Díaz Ayuso would most likely need to rely on an alliance with Vox, possibly opening the door to Spain's first regional government with the far-right controlling several ministries.

“I have a team that is extremely well prepared after having to live through the worst two years for Madrid in terms of a pandemic, a winter blizzard and wildfires," she told AP. "If I have to depend on other parties, I want it to be for as little as possible, so I don’t have to modify my project."

“I want to lead a project freely," she added.

The campaign took a nasty turn last week with envelopes containing death threats sent to Iglesias and other left-wing politicians. Until the threats, which Iglesias blamed on the toxic political atmosphere created by the far-right, left-wing candidates had sought to weaken Díaz Ayuso's chances for reelection by criticizing her handling of the pandemic.

Madrid has reported 23,000 virus-related deaths, proportionally more than any other Spanish region or European capital. Over 5,000 people with COVID-19 died in the region's nursing homes, most of them during the pandemic's first wave in Spain.

But Díaz Ayuso rejects any criticism of her government's pandemic response or comparisons with other parts of the world. She described as “pure manipulation” documents published by Spanish media that showed regional officials discussing how to triage patients and a letter from a Cabinet member denouncing how the system's collapse in those early days left many, especially older adults, without access to medical treatment.

“What happened was painful, a great tragedy. But it would be unwise to tell people today that the death of their father or mother was avoidable. That's a lie. People were dying everywhere: they were dying at home, in the ICUs, and at hospitals," she said. “It was like a tsunami.”

Díaz Ayuso argued that the lessons from the first wave taught her team that lockdowns were damaging to the economy and to the mental wellbeing of many citizens.

“We became allies of the caterers, of the shops, the museums and, increasingly, of all the society," she said, rejecting the notion that Madrid became Europe’s party grounds this spring.

Despite experts’ insistence that the virus’ airborne nature makes its spread easier indoors, Díaz Ayuso said that bars and restaurants in Madrid remained safe because they were properly ventilated. She said her government determined that most outbreaks happen in homes where people gather unmasked precisely when they can't go out dining or drinking.

“That’s why there are other Spanish regions and other parts of Europe that have closed down and, yet, they don’t manage to bring down the virus," she said, adding: “They are not going to achieve it that way.”

One of Madrid's most applauded moves during the first wave of the pandemic was improvising a field hospital in a large exhibition center that relieved the pressure on existing medical centers. The facility was also used as a blueprint for a vast, permanent “pandemic hospital" built in record time for an initial investment of 120 million euros ($145 million).

Her critics have described the Nurse Isabel Zendal Hospital as a vanity project that siphoned much-needed medical personnel from better-equipped facilities and money that the region could have used to ramp up contact tracing. Ángela Hernández, a spokesperson for AMYTS, Madrid's main union of medical workers, said the facility "is the most visible symbol that Madrid opted for a model that sought to live with the virus, rather than eradicating it.”

But highlighting the hospital's “1-kilometer-long facade,” Díaz Ayuso said the pandemic hospital had treated over 4,000 patients since it started operating in December.