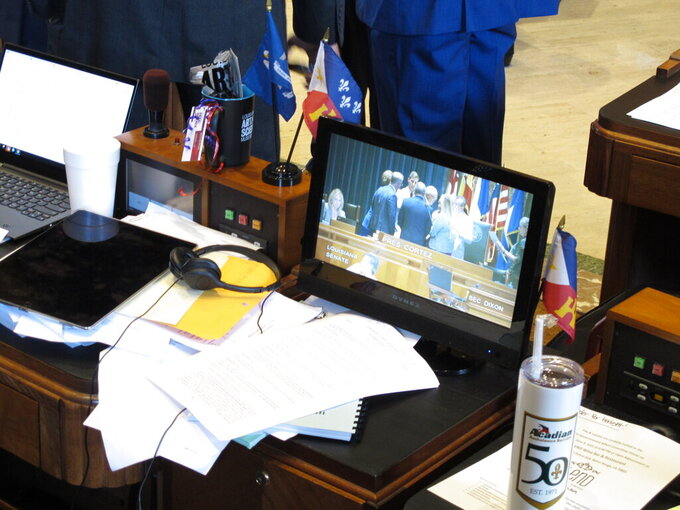 The Louisiana State Senate is shown on a TV at a House lawmaker's desk on the last day of the legislative session, Thursday, June 10, 2021, in Baton Rouge, La. (AP Photo/Melinda Deslatte)

More than $1 billion was carved off the top for two legislative priorities: $563 million for road and bridge work and $490 million to shore up Louisiana's near-bankrupt unemployment trust fund and repay money borrowed to cover jobless benefits.

A web of agencies and commissions will divvy up much of the remaining money among specific projects and businesses, under a package of bills that chart the spending plans and create the bureaucracy to manage the new programs. Grant applications, deadlines and other parameters remain to be developed for most of the initiatives.

Lawmakers particularly touted $300 million they've set aside for repairs and improvements to community water systems in a state where half the systems are operating off structures more than 50 years old and are regularly ranked in national surveys as barely above failing.

“Now we have the capability and the resources to address this,” House Appropriations Chairman Jerome “Zee” Zeringue, a Houma Republican, said during discussion of the spending plans.

A newly created 10-member commission of lawmakers will decide which community water and sewer systems should share in the money. The commission’s required to hold its first meeting sometime this month to start setting up the process for sifting through applications.

“There will likely be more requests than we have money in a $300 million program,” said Senate President Page Cortez, a Lafayette Republican. “The hope is we can use other sources of funding” to combine with the federal pandemic aid to finance the work.

Treasurer John Schroder's office will oversee grant programs to steer $4.5 million to movie theater operators who lost business during the pandemic and $10 million to timber harvesting and hauling businesses impacted by COVID-19.

The Department of Revenue will administer a $10 million aid program that will give grants to nonprofits and small businesses. The Board of Regents will spend $5 million on efforts to bolster the state's ranks of nurses and other health care workers. Gov. John Bel Edwards' Division of Administration will split $50 million among the state's ports to replace revenue lost because of the coronavirus outbreak and to improve security measures.

The governor's Office of Broadband Development and Connectivity will administer a new grant program financed with $90 million in federal aid to pay for projects aimed at expanding high-speed internet across Louisiana, particularly in rural areas where access is limited.

The Edwards administration will use $60 million to hand out grants to local tourism agencies to help market Louisiana and promote its ailing tourism industry. Another nearly $18 million went to Lt. Gov. Billy Nungesser's office for a similar effort on a statewide scale.

Several nonprofits criticized lawmakers for their spending priorities, saying they should have earmarked some of the money to help people struggling with housing needs, food insecurity, child care difficulties and other issues.

“The issues exposed by the COVID-19 pandemic have burdened Louisianans for generations, and the state’s unfortunate budget priorities do little to help the families that need it the most,” Korey Patty, executive director of food bank collaborative Feeding Louisiana, said in a statement released by a group of organizations unhappy with the distribution.

The federal dollars allocated in the legislative session that ended Thursday represent more than half the $3 billion in direct block grant aid Louisiana is receiving from the coronavirus assistance package passed by Democrats in Congress earlier this year. Republican legislative leaders and the Democratic governor agreed to spend the remaining cash later.