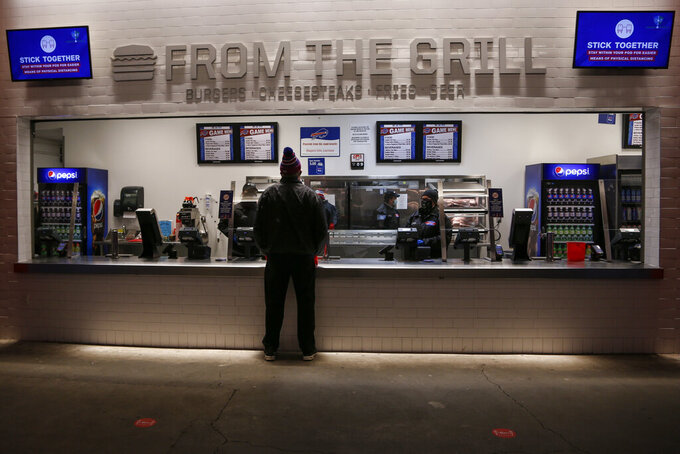 A fan looks at the menu at a concession stand as teams warm up before an NFL wild-card playoff football game between the Buffalo Bills and the Indianapolis Colts at Bills Stadium Saturday, Jan. 9, 2021, in Orchard Park, N.Y. (AP Photo/Jeffrey T. Barnes)

ORCHARD PARK, N.Y. (AP) — It was just like the pre-coronavirus pandemic days on Saturday morning for Scott Hammond and his son Landon when they were among the first to get to their seats before a Buffalo Bills home game.

Everything else, however, felt different for the Hammonds, who were among the lucky 6,700 few to land tickets for the Bills' 27-24 wild-card playoff win against the Indianapolis Colts.

Having to be screened for COVID-19 and not being able to enjoy tailgating were small prices to pay for being the first to attend a Bills home game this season.

“I almost cried,” said Hammond, of finding out he won tickets some 10 days ago in a lottery. “I didn’t think it would be possible this year. This is something we’ve done since he was a little boy and we absolutely love it.”

His 15-year-old son was even more excited upon learning they were going to attend Buffalo’s first home playoff game in 24 years.

“I was running around the house. I was screaming. I was, ‘Let’s go!'" Landon Hammond said. “It was like a dream come true.”

Fans eligible to attend the team’s home game for the first time this season take part in the lottery that was limited to season-ticket holders who decided to roll over their payments into the 2021 season.

In allowing a limited number of fans to attend the game, state health officials required everyone — including stadium officials and media — entering the stadium to show proof of a negative coronavirus test taken within 72 hours of kickoff.

Gov. Andrew Cuomo on Saturday announced that of the 7,157 people who took part in the rapid testing, 137 tested positive for the virus.

Cuomo, a Democrat, had previously said he would be at the game. But he changed his mind after some Bills fans questioned why the governor would be allowed to attend when the team was limiting seating.

In a teleconference with reporters, the governor also said that that there were three additional cases of New York residents infected with a new strain of the virus. Two were connected to a cluster in Saratoga, New York, while the third involved a 64-year-old man who tested positive for the variant in Nassau County, Cuomo said.

The new cases suggest that infections from the strain “are more widespread than the numbers would suggest,” Cuomo said.

In Buffalo, fans were gathered in groups of two and four in being scattered around the two lower bowls of the 70,000-seat stadium, with the third deck left empty. Tailgating was forbidden and fans were required to wear masks.

“I think we consider ourselves very lucky and blessed to be here today,” said Hammond, a 10-year season-ticket holder from Rochester. “I got to live through the ’90s and the great run we had there, and (Landon) has literally waited his whole life for this moment.”

The Bills made their third playoff appearance in four years, which followed a 17-year postseason drought which stood as the longest active streak in North America’s four major professional sports.

Buffalo’s previous home playoff game was a 30-27 loss to Jacksonville on Dec. 28, 1996, in what proved to be Bills Hall of Fame quarterback Jim Kelly's final game.

Most fans came wearing Bills jerseys and brought placards, one of which read, 'We’re Baaaack!” Another fan held up a sign that read: “Wish you were here.” And a loud cheer went up as Bills players took the field for pregame warmups.

The challenge was for members of the so-called “Bills Mafia” to provide their team something resembling a home-field advantage.

“I’m going to get as loud as I can,” Hammond said, through his facemask. “If I can’t talk tomorrow, I’ve done my job.”