LVMH files countersuit against Tiffany over $14.5B deal 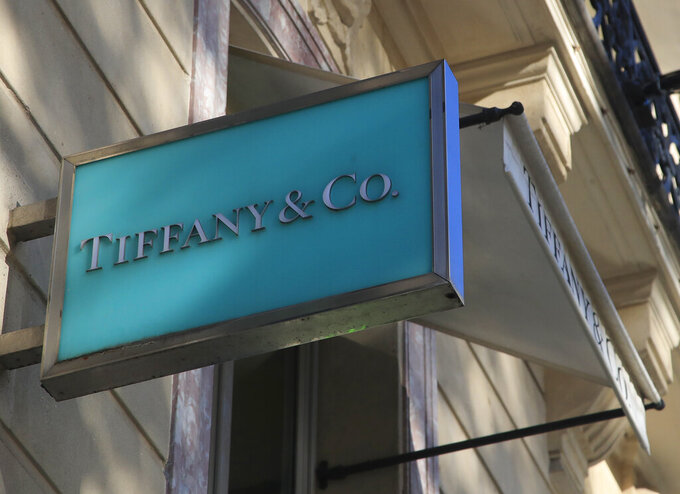 FILE - In this Nov. 25, 2019 file photo, the logo of Tiffany & Co. is pictured on the Champs Elysees avenue in Paris. Luxury conglomerate LVMH Moët Hennessy Louis Vuitton SE has filed a countersuit Monday, Sept. 28, 2020, against Tiffany over their ruined merger deal, noting conditions necessary to close the $14.5 billion acquisition of the jewelry chain have not been met. (AP Photo/Michel Euler, File)

NEW YORK (AP) — Luxury conglomerate LVMH Moët Hennessy Louis Vuitton SE has filed a countersuit against Tiffany over their ruined merger deal, noting conditions necessary to close the $14.5 billion acquisition of the jewelry chain have not been met.

It also noted in a statement that the “spurious arguments put forward by Tiffany are completely unfounded."

The lawsuit, filed late Monday in Delaware Chancery Court, is the latest legal spat between the two companies over what would have been the the biggest deal in the luxury market. It follows a lawsuit that Tiffany filed earlier this month against LVMH after the French conglomerate—owner of Louis Vuitton, Dior among other brands—said it was pulling out of the pact. It had cited that the French government had requested a delay to assess the threat of proposed U.S. tariffs.

In a lawsuit filed earlier in September to enforce the merger agreement, Tiffany said LVMH’s argument had no basis in French law. Tiffany also said that LVMH hasn’t even attempted to seek the required antitrust approval from three jurisdictions.

LVMH's pullback also came after the deal’s value had been eroded by wider industry troubles caused by the coronavirus pandemic.

In a statement Tuesday, LMVH blamed Tiffany's mismanagement of its business during the pandemic. It noted that the jewelry chain paid the highest possible dividends while the company was “burning cash and reporting losses."

“No other luxury company in the world did so during this crisis," LVMH said in the statement. It noted that other examples of what it called mismanagement in the filing including slashing capital and marketing investments and taking on additional debt.

Tiffany fought back what it called “baseless and misleading counterclaims" filed by LVMH. It argued that it was another “blatant attempt" to evade its contractual obligation to pay the agreed price for Tiffany.

“Tiffany has acted in full compliance with the merger agreement, and we are confident the court will agree at trial and require specific performance by LVMH, “said Tiffany's Chairman Roger Farah in a statement. “Had LVMH actually believed the allegations made in its complaint, there would have been no need for LVMH to procure the letter from the French Foreign Minister as an excuse for the refusal to close."