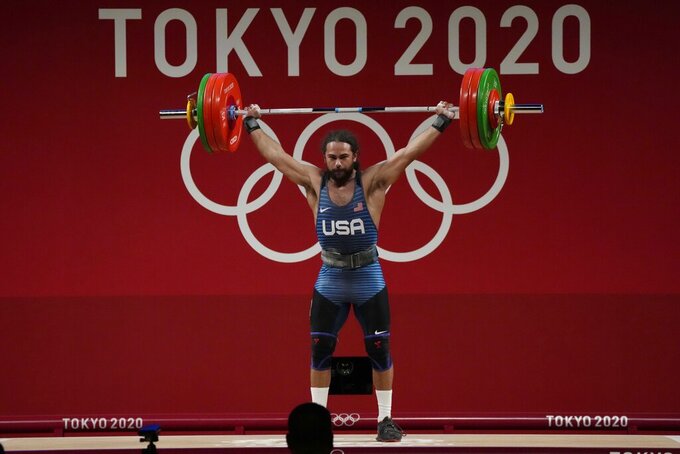 The 37-year-old Chinese weightlifter became the oldest man to win an Olympic gold medal in the sport on Saturday after a tense finish in the men's 81-kilogram category.

Wearing his signature shiny gold shoes, Lyu lifted 170kg in the snatch and 204kg in the clean and jerk for a total 374kg. That was 7kg more than Zacarias Bonnat of the Dominican Republic in second and 9kg ahead of Italian rival Antonino Pizzolato, who won bronze.

Lyu's win was only assured after Pizzolato tried and failed a world-record 210-kilogram clean and jerk. Lyu then tried the same weight but couldn't complete the lift. He hoisted his coach into the air to celebrate the win and kissed the Chinese flag on his singlet.

“Five years is a long time for a man of this age," Lyu said through an interpreter, looking back to his long wait since winning silver at the 2016 Rio de Janeiro Olympics. He said he longed to see his two children after spending most of his time away at training camps, but that the sport inspired him and gave him a role as a father figure to younger weightlifters.

“It's a beautiful art and maybe that is why I can be an athlete for such a long time,” he said.

Lyu — who also won gold in 2012 — immediately shot down any talk of retirement.

“This is not my last competition,” he said, adding that he's now targeting next year's world championships on home soil in China — and beyond to the 2024 Olympics. “If you see me next year, you will see me in Paris.”

By then, he could have another Olympic gold medal. The athlete who beat Lyu to the top spot in 2016, Nijat Rahimov of Kazakhstan, has been suspended after being accused of switching urine samples that year. It would be Rahimov's second doping offense.

Bonnat's silver was the Dominican Republic's first medal in Tokyo and its first ever in weightlifting. Pizzolato won Italy's third weightlifting medal of the Tokyo Games, its best haul since 1924. Pizzolato credited the resurgence to bringing some “Italian style” to the sport and no longer being “afraid of others.”

Harrison Maurus narrowly missed what would have been the first U.S. men’s weightlifting medal since 1984, placing fourth with 361kg. Maurus tried to beat Pizzolato for bronze with a 205kg clean and jerk but stumbled.

“We went out and fought and put the weight on the bar we needed to win a bronze,” Maurus said. “I'm proud of the way we went in and represented.”

“I feel great. I feel incredible,” Elbakh said, adding he will keep aiming for the world record. “This is not an end, we still have more and coming soon, and we will do our best to make it even better."

Keydomar Vallenilla of Venezuela took second with a total 387kg despite having his last lift being ruled out for dropping the bar before he got the signal to do so.

Vallenilla lifted the same total as third-place finisher Anton Pliesnoi of Georgia but was ranked higher because he made his best clean and jerk lift earlier in the competition.

Pliesnoi was barely able to walk after the event and said he tried to “switch on the emotions and switch off the pain, to do everything to at least get the bronze” after injuring his left knee five days ago.