Macy's closes out a tough year with hope for 2021 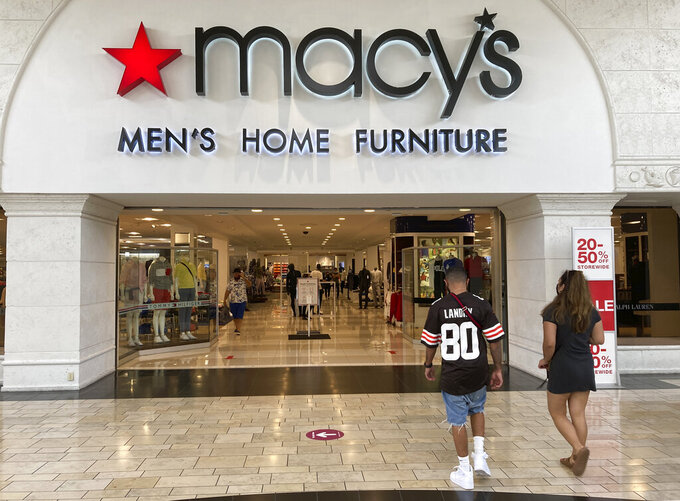 Shoppers walk into a Macy's department store Monday, Feb. 22, 2021, at Miami International Mall in Doral, Fla. Macy’s is reporting a 52% drop in fiscal-fourth quarter earnings while sales dropped nearly 19% as shoppers continue to stay away from many physical stores during the pandemic. The department store chain said Tuesday, Feb. 23 it anticipates 2021 as “a recovery and rebuilding year as the company sets a foundation for growth.“ (AP Photo/Wilfredo Lee)

NEW YORK (AP) — Macy's is looking ahead to a year of recovery and rebuilding from the pandemic as the iconic department store chain offered annual forecasts that beat Wall Street forecasts.

Driving that optimism is Macy's push to accelerate online sales, while focusing on physical stores at top-tier malls and modernizing its supplier network to speed up deliveries.

As a result, Macy's believes annual sales will reach $20.75 billion this fiscal year, exceeding the roughly $17 billion that Wall Street had been projecting. Macy’s also expects adjusted earnings per share in the range of 40 cents to 90 cents for the year, much better than the $2.92 loss that analysts forecast, according to FactSet.

The company said on Tuesday it expects digital sales to reach $10 billion within the next three years and that the online side will become even more profitable. Still, the department store defended its physical store business, noting that online sales are two to three times higher in markets with Macy's stores.

The forecast came as Macy's posted a fourth-quarter profit drop of 52%. Sales slid nearly 19%. In the context of a year spent under the weight of a pandemic, that was seen as a pretty good ending to 2020 for the besieged department store.

Macy's faced challenges even before the pandemic forced the chain and its peers to close temporarily last spring to reduce the spread of the virus. The retailer was wrestling with increasing competition from online players like Amazon and discounters like Target and Walmart. But the pandemic accelerated shoppers' shift to online spending and increased the dominance of big box stores, which were allowed to stay open because they were deemed essential.

Macy's and other department stores are being threatening on multiple levels. Target, for example, signed a deal with beauty chain Ulta late last year to put Ulta shops in 100 stores in the next few month.

Macy's has been fighting back, while taking some bolder moves. The company has been paring back inventory, while continuing to close some stores. It also launched curbside pickup and is expanding its off-price concept BackStage, which outperformed a key sales metric in Macy's stores by more than three times.

Macy's also rapidly changed its merchandise mix to reflect what shoppers are embracing during a pandemic like cooking products, home and activewear among other things. But it has also introduced new items like skin care devices and baby gear.

Macy's said that sales of beauty, home, fragrances and watches helped drive sales in the latest quarter, while career and other dress up clothes have remained in the doldrums.But it said it will be ready to increase assortments of dress up clothes when it sees shoppers going out more amid the vaccine rollout.

“It could have been a terrible year for Macy’s," Jeff Gennette, Macy's CEO, told analysts on the earnings call Tuesday. "Instead, we battled through the store closures and reopened to deliver unexpected wins and some promising tests."

Gennette added that the company “learned a tremendous amount that has informed us on how to best adapt and improve our outlook."

For the final fiscal quarter of the year that ended Jan. 30, Macy's reported profits of $160 million, or 50 cents a share. It was 80 cents per share if one-time costs are considered, and that was also far better than the per-share forecasts of 11 cents from industry analysts, according to a survey by FactSet.

It's still well below $340 million, or $1.09 per share, for the same period in 2019, the last before COVID-19 emptied retail stores nationwide. Since then, the New York company furloughed a majority of its employees. It began reopening stores in May, but the recovery has been painfully slow.

Quarterly sales were $6.78 billion, also edging out analyst projections. The company acquired seven million new customers, mostly through online and many of them under 40 years old. It said 25% of Macy's online sales were fulfilled in its stores. And online sales accounted for nearly 44% of sales, up from 30% in 2019, the company said.

Sales at stores opened at least a year fell 17%, but online sales rose 21%.

Following the planned closure of all 125 stores, at least 85% of its sales will come from stores located at top tier malls.