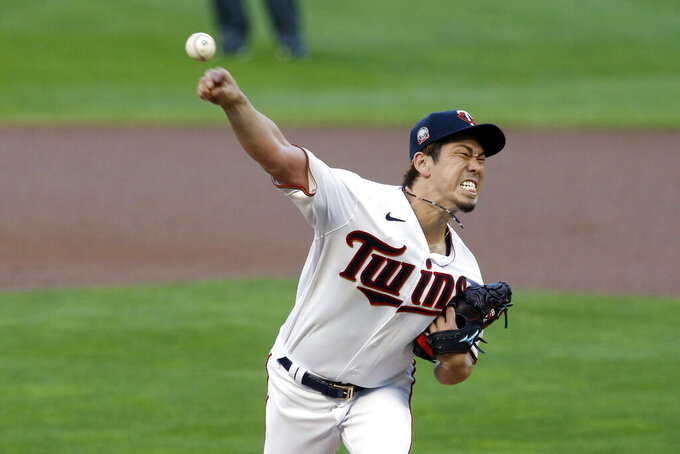 The ball fell just beyond the reach of leaping shortstop Jorge Polanco, and Maeda bent at the waste and grinned as he watched the ball bounce in the outfield grass.

Maeda's bid included a club record eight consecutive strikeouts, and Sogard's hit came on Maeda's 115th pitch of the night, the most thrown by a pitcher in a game during this pandemic-shortened major league season.

Maeda finished with two walks and 12 strikeouts. His previous high for pitches this season was 84. The Twins led 3-0 entering the ninth.

Maeda fanned Ben Gamel to finish the fifth for his eighth straight punchout, passing Jim Merritt (1966) and Francisco Liriano (2010), who both fanned seven batters in a row for the Twins. The major league record is 10 consecutive strikeouts, set by Tom Seaver for the New York Mets in 1970.

Maeda's streak ended when Luis Urías grounded out to start the sixth. The 32-year-old got two more groundouts by the Brewers to cruise through the inning and retired his 20th straight batter, Justin Smoak, with a strikeout to finish the seventh.

Maeda is in his first season with Minnesota, which acquired him this winter from the Los Angeles Dodgers for pitching prospect Brusdar Graterol.

The Twins franchise has seven previous no-hitters, including five since moving to Minnesota. The last was by Liriano on May 3, 2011 against the White Sox.