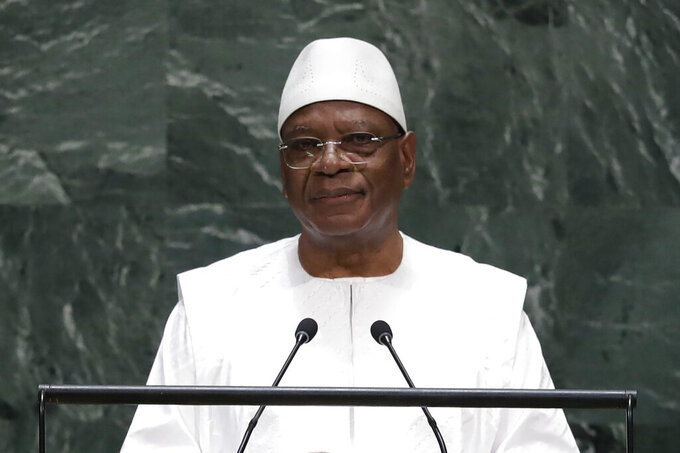 FILE - In this Sept. 25, 2019, file photo, Mali's President Ibrahim Boubacar Keita addresses the 74th session of the United Nations General Assembly, at the United Nations headquarters. In a televised midnight speech, Keita promised early Thursday, July 9, 2020, to reform the country's constitutional court in a bid to quell another round of protests calling for his resignation. (AP Photo/Frank Franklin II, File)

The regional bloc known as ECOWAS has called for Malian President Ibrahim Boubacar Keita to form a unity government and share power. His opponents, though, say they won't accept anything less than his immediate resignation, which West Africans leaders have signaled they won't accept.

Keita was democratically elected in 2013, and then re-elected five years later. His unpopularity since then has grown considerably, sparking allegations of corruption and of mismanagement of the Islamic insurgency crisis that has destabilized the country.

Choguel Maiga, one of the leaders behind the June 5 Movement, said protesters already have made their opinions known and he again dismissed the plan endorsed by the West African leaders Monday.

“They have minimized our concerns ... at a time when we are going through a crisis of governance,” he said. “Malians want a change at this level.”

A first effort at regional diplomacy by ECOWAS mediators already had failed to bring an agreement from the parties, prompting Monday's summit held by video conference because of the COVID-19 pandemic. It was not immediately clear what action the opposition might take now, but they have agreed to put protests on hold in this predominantly Muslim country until after the holiday of Eid al-Adha expected later this week.

Initially opposition leaders backed away from a call for Keita's ouster, but they hardened their resolve after protests in the streets of Bamako brought a violent response by security force. At least a dozen protesters have died this month amid unrest, deepening perceptions that Keita is out of step with the majority of Malians.

The 15-nation region bloc, though, has called Keita's resignation a “red line” that won't be crossed. ECOWAS was instrumental in restoring democracy in Mali after a 2012 military coup, and will not support an elected leader being forced out. Such a move could set a dangerous precedent at a time when coups in West Africa are increasingly becoming a thing of the past after a long history of power grabs.

The movement against Keita was inflamed by a dispute over more than 30 legislative elections but it has tapped into a deeper resentment of how the president has handled the country's relentless conflict. While the struggle pre-dates Keita's inauguration, Malians are increasing frustrated with his government's inability to bring peace more than seven years after a French-led military operation forced jihadists from power in the north.

In recent years the extremists have regrouped, launching scores of attacks on Malian soldiers and U.N. peacekeeping patrols. The jihadists also have seeped into central Mali, where their very presence has exacerbated tensions between ethnic groups and fueled further violence.