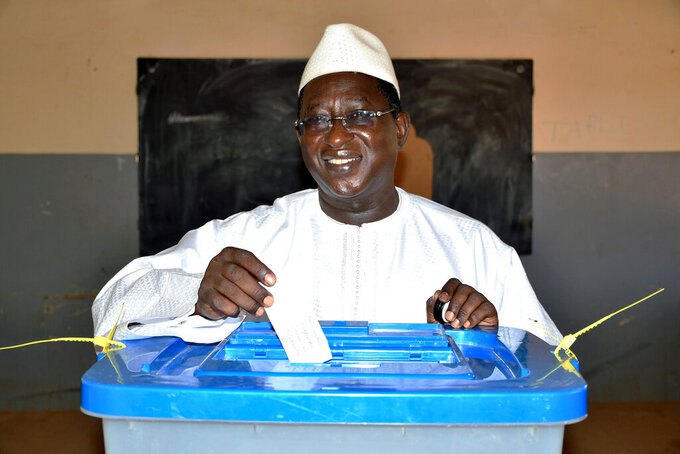 FILE - In this Aug. 12, 2018 file photo released by the Union for the Republic and Democracy party shows then opposition Presidential candidate Soumaila Cisse casting his ballot during the presidential second round election in Niafunke, Mali. Malian opposition leader Soumaila Cissé, who was held hostage for six months by jihadists and considered a leading contender for 2022 elections, has died in Paris, his family said Friday. (Boubacar Sada Sissoko/Union for the Republic and Democracy via AP, File)

BAMAKO, Mali (AP) — Soumaila Cissé, Mali's main opposition leader who was held hostage for six months earlier this year by jihadis and was considered a leading contender in the 2022 presidential election, has died in Paris. He was 71.

“The doctors did everything to keep him alive, but that’s the way of God’s will,” he said.

The death throws Malian politics into new uncertainty. Cissé was the runner-up in the past three presidential elections and many thought he had the best chances of finally winning in 2022.

He was taken hostage by al-Qaida-affiliated jihadis in March while campaigning for legislative elections in his hometown of Niafunke in northern Mali. Amid public pressure, the Malian government obtained his liberation in October, along with that of French and Italian hostages, in exchange for the release of around 200 jihadis from Malian prisons.

It wasn't known whether a ransom had been paid, though extremist groups have long funded their operations with such payments from European governments.

In an interview after being released from captivity, Cissé told France’s TV5 Monde that his captors moved the hostages by motorcycle, boat and even camel. He said he was held in more than 20 different locations. While he said he wasn't abused physically or verbally, he described extremely difficult conditions in the desert, and said he lacked the medication he needed.

Cisse said he was able to listen to the radio and was angered by news of the August military coup that overthrew Mali’s democratically elected president, Ibrahim Boubacar Keita.

Mali's interim leader, Sem Ba N'Daw, expressed his condolences to Cissé's family and supporters on Friday, saying millions of Malians “are in shock” at the news. Describing a meeting with Cissé after he was freed, he said Cissé's “optimism had remained intact," and said “the country still needed his experience and wisdom to face today's challenges.”

In his last Facebook post, on Christmas Eve, Cissé wished “an excellent holiday of joy and health" to Christians in his country and around the world, at a time when Mali is facing multiple crises — including the coronavirus pandemic.

No immediate funeral plans were announced.