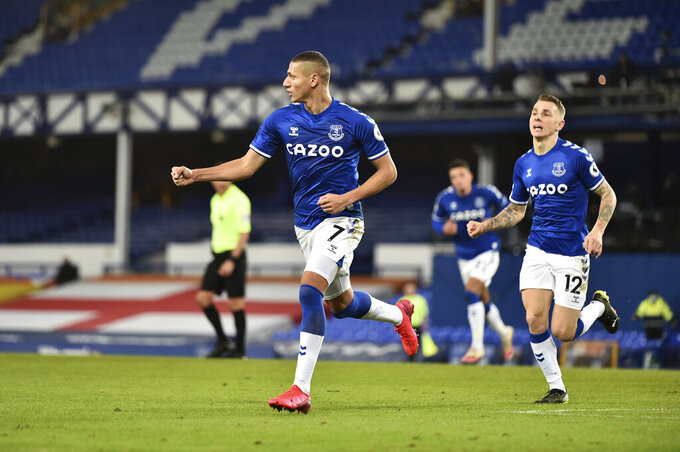 A 17th straight win in all competitions — including 12 in a row in the league — wasn't looking so clear-cut after Richarlison canceled out Phil Foden’s opener for City before halftime. It was only the second time in the last nine league games City has failed to keep a clean sheet.

With City becoming the first English top-flight side to start a calendar year with 10 consecutive league wins, it is getting harder to see who might deny Guardiola a third Premier League title.

This match should have been played in December, but was postponed at short notice due to a coronavirus outbreak within the City camp.

But it was not the usual accomplished start by the leaders, with some sloppy passing allowing Everton early glimpses of goal. Aymeric Laporte, preferred to John Stones at center back, almost fluffed a clearance in front of goal with Richarlison closing in.

Gradually City tightened up its game as play shifted toward the other end, where Silva went down under a challenge from Michael Keane but saw his penalty shouts fall on deaf ears.

Everton had another problem, though, as Yerry Mina was slow to get up and the Colombian was replaced by Seamus Coleman.

The reshuffled back four was soon under scrutiny. Mason Holgate got a vital touch to stop Rodri’s pass reaching the run of Joao Cancelo before Keane’s header prevented Mahrez’s cross from finding Gabriel Jesus at the far post.

And the pressure told with 32 minutes gone. Following a corner, Everton could only half-clear Mahrez’s cross and the ball fell for Foden, whose shot took a deflection off Coleman to beat Pickford on the England goalkeeper’s return to the side.

City might have been expected to take complete control but instead conceded six minutes later.

Coleman played an altogether different role in this one, picking out the run of Lucas Digne, who fired onto the post. The ball bounced out, hit Richarlison on the thigh and went in.

It was only the second Premier League goal City had conceded in 45 days, and, given the other was a Mohamed Salah's penalty for Liverpool, the first from open play.

The second half was be a different matter as City moved through the gears. Jesus, who had seven goals in his previous five against Everton, squandered a glorious chance when played in by Kyle Walker while Rodri headed Foden’s corner narrowly wide.

Then came the goals from Mahrez and Silva, giving Guardiola the opportunity to ease De Bruyne back into action for his first minutes in almost a month.