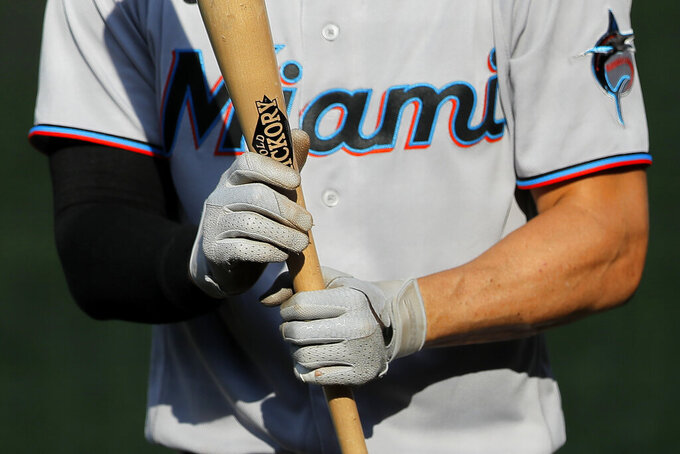 Miami Marlins' Matt Joyce holds a bat while standing at the on deck circle during the second inning in game one of a baseball double-header against the Baltimore Orioles, Wednesday, Aug. 5, 2020, in Baltimore. (AP Photo/Julio Cortez) 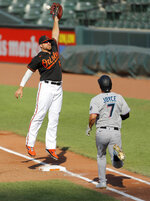 BALTIMORE (AP) — Brian Anderson hit a fourth-inning homer off Alex Cobb and the Miami Marlins won their second straight since returning from a coronavirus-prompted layoff, beating the Baltimore Orioles 1-0 Wednesday in the opener of a doubleheader.

Doubleheaders this season are seven-inning games, one of many rules designed to get the 30 teams and their pitchers through a dense 60-game schedule. As a nod to the first game of its kind at Camden Yards, the public address system blared “Thank God I’m a Country Boy” after the top of the fourth instead of its usual slot during the seventh-inning stretch.

Miami improved to 4-1 with its second successive shutout win over the Orioles. After yielding three hits in a 4-0 victory on Tuesday night, the Marlins permitted only three hits in this one.

And so, a team that was inactive for eight days after 18 players tested positive for COVID-19 finds itself atop the NL East by percentage points in this absolutely unpredictable baseball season. The Marlins had to scramble to fill out the roster after filling their injured list, and the new-look club still hasn't given up a run.

The Orioles entered this series coming off a three-game sweep of Tampa Bay, but their bats have been completely silent against a Miami pitching staff that is not considered to be anything close to extraordinary.

Elieser Hernandez allowed two hits over 4 1/3 innings and Brandon Kintzler worked the seventh for his second save.

After getting 15 starts of 21 appearances last year, Hernandez is looking to be a guy who pitches every fifth day.

“I get inspired seeing these guys pitch," the right-hander said. “I want to join the rotation and help the team."

Hernandez gave up a one-out double to Chance Sisco in the fifth and Pedro Severino followed with a single before Nick Vincent (1-0) got Hanser Alberto to hit into a double play, ending Baltmore's only threat.

Anderson produced the game's lone run with an opposite-field drive to right. It was one of the Marlins' two hits, both off Cobb (1-1).

Realizing Hernandez and Cobb were locked in a duel, Anderson said he was “trying to put something up for our pitchers. It was just a matter of getting that ball up in the zone and putting a good swing on it."

Tuesday night's game was originally scheduled for July 29 and the first game of the doubleheader was a makeup for July 30. The Marlins were to serve as the “home” team in the nightcap and on Thursday to make up for two games scheduled in Miami on July 27-28.

The Marlins' battle with COVID-19 has cleared the way for two rookies to make their major league debut.

Both are still looking for their first hit.

Marlins: OF Matt Joyce, who missed all of summer camp with the coronavirus, said his antibodies tests have come back negative and he continues to observe protocols. Eighteen of his teammates ended up being infected. Joyce came off the injured list Tuesday.

Orioles: LHP John Means was placed on bereavement list. Hyde was uncertain if Means would be back for his next start, tentatively Sunday in Washington. “He's dealing with a family matter and we're going to give him some space and time," Hyde said.

Asher Wojciechowski was slated to pitch for Baltimore in the nightcap. Miami manager Don Mattingly planned to make it a bullpen game.