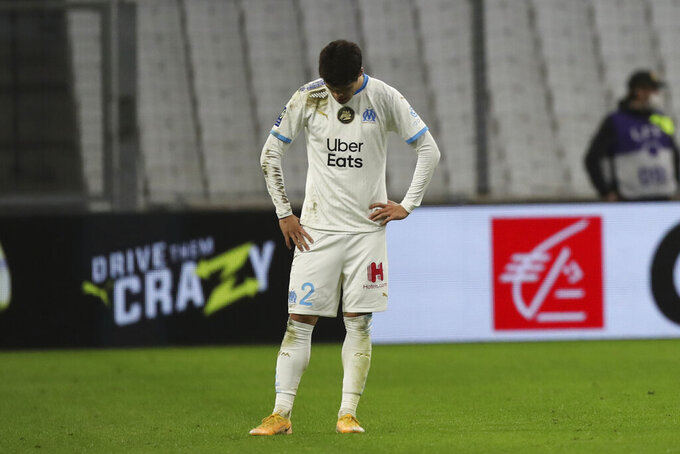 With a congested schedule and the French league enduring financial difficulties, Marseille president Jacques-Henri Eyraud believes it is time to downsize the competition.

“I do think playing in a 20-club league is no longer sustainable,” Eyraud said Wednesday. “A lot of reforms need to be talked about.”

Eyraud is at the heart of those talks as one of the French league’s board of directors and a member of UEFA's club competitions committee. UEFA is in the process of an overhaul of the Champions League that would add 100 more matches each season and potentially provide a fourth spot for French clubs.

The pandemic has already meant squeezing more games into a shorter period this season and the burden on teams would grow further with an expanded Champions League.

“For Olympique Marseille, we have been playing a game every three days for four months and it will continue to be the case in February and March," Eyraud told the FT Business of Football Summit. “I think it is harmful for the players, it’s not good for the organization, I don’t think it’s good for the fans and I think it’s something we should be thinking about very seriously.”

While France, along with England, Spain and Italy, has 20 teams in its top division, Germany has 18. France has already cut its third competition — the League Cup — to ease the workload on players.

But additional European revenue could be vital for clubs like Marseille who have been hit by the coronavirus pandemic that has shut out fans, and the collapse — after only four months — of a domestic television deal that should have been worth more than 4 billion euros ($5 billion) over four years.

Rather than the windfall from Spanish-based broadcaster Mediapro, Canal Plus is paying only 200 million euros to broadcast games for most of the second half of the season. Eyraud sees the financial turmoil as a “unique opportunity” to assess changes in French football.

“We run on a business model that is widely dependent on transfers and player trading," Eyraud said. "Around 17 out of 20 clubs in Ligue 1 do turn a loss and a pretty significant one prior to generating income from transfers.

“So we have been relying on this over and over again. This is not the ideal model. When the crisis hits it is certainly a sign of weakness."

The French league (LFP) is securing a financial rescue plan from the government after estimating clubs’ losses already amount to more than 1 billion euros.

“We have strength — our academies are efficient turning young players into stars,” Eyraud said. “But that is not enough. We need to be much more balanced in terms of sources of revenue. That is what this crisis will trigger."

Marseille, which was bought in 2016 by former Los Angeles Dodgers owner Frank McCourt, has additional turmoil with Andre Villas-Boas suspended after the coach offered to resign because of a conflict with the club’s board over transfer decisions.

Marseille was eliminated from European competitions after finishing last in its Champions League group in December. The team is struggling to qualify for next season as it sits sixth in the standings after beating Nice 3-2 at home on Wednesday night.

Although Marseille has a game in hand on third-place Lyon, it remains a massive 15 points behind last season's Champions League semifinalist.