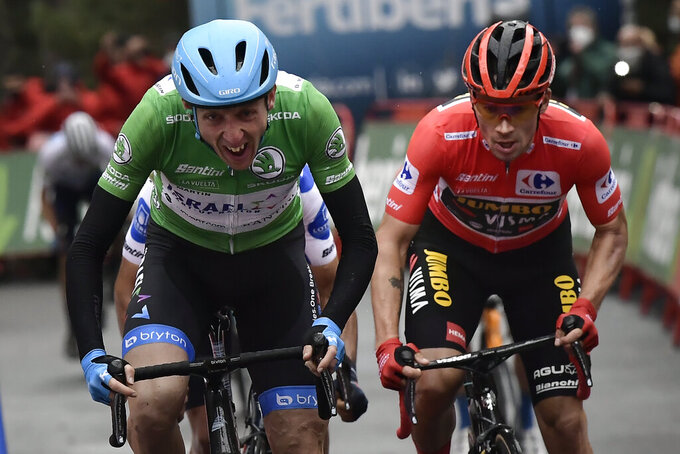 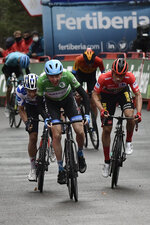 VINUESA, Spain (AP) — Dan Martin held of his rivals on an uphill climb to the finish line to win the third stage of the Spanish Vuelta on Thursday and close in on defending champion Primoz Roglic's overall lead.

Martin clinched the win with a strong push in the final 200 meters (218 yards) of the 166-kilometer (103-mile) hilly stage from Lodosa to Vinuesa. The victory moved him to within five seconds of Roglic, who finished second on the stage. Richard Carapaz was third and is 13 seconds off the overall lead.

It was Martin's second Vuelta stage win, coming nine years after his first.

“I've come so close this year to winning," Martin said. “I just really wanted to win a stage for this team because they have been so good to me. I was really determined to win the stage today.”

The 34-year-old Irishman dedicated the victory to his Israel Startup Nation team and to his wife.

“This is the first time I've won a race since my kids were born,” he said.

Roglic, who a few weeks ago lost the Tour de France on the final competitive day, won the first Vuelta stage and was second on the second stage.

“Not a really easy day,” Roglic said. “The team did again a great job. I was close, still a nice day for us.”

Two-time champion Chris Froome, out of contention after struggling during the first stage, crossed the line more than seven minutes behind Martin.

French rider Thibaut Pinot withdrew from the Vuelta before the start of the third stage because of back pain stemming from his crash on the first day of the Tour de France. He will not compete again this year.

Friday’s fourth stage will take riders 191.7 kilometers (119 miles) through a mostly flat route from Garray to Ejea de los Caballeros. It will be one of the few stages this year with a sprint finish.

Shortly after the riders crossed the line, Vuelta organizers announced that the sixth stage had been altered and will no longer finish in France because of the country's tightened coronavirus restrictions.

The stage will now finish at a ski station in Aramón Formigal, in Spanish territory.

The Giro d'Italia also had to make changes to its route because of the situation in France.

The Vuelta is also taking place amid tight health restrictions as Spain recently endured a surge in coronavirus cases. The race was postponed from earlier in the year because of the pandemic.