"Masked Moose" among public health projects on way in Maine 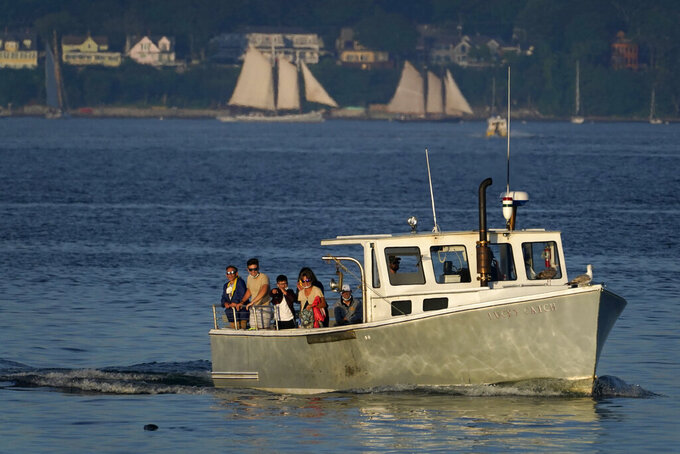 Tourists relax the use of their pandemic masks while gathered to view a seal swimming near their tour boat, Monday, Aug. 10, 2020, off Portland, Maine. The state has one of the lowest number of coronavirus cases in the country. (AP Photo/Robert F. Bukaty)

PORTLAND, Maine (AP) — Dozens of cities, towns and tribal governments around Maine will receive $4 million in grants to improve their response to the coronavirus pandemic, the administration of Gov. Janet Mills said Tuesday.

The grants are designed to help fund projects that support public education campaigns, physical distancing projects and local businesses. Maine Department of Health and Human Services Commissioner Jeanne Lambrew said the money has supported “innovative responses on the front lines of this pandemic.”

One of the proposed projects is a campaign featuring a “Masked Moose” character in the town of Bethel. The campaign would include a costumed character who will visit schools and businesses to demonstrate the importance of coronavirus prevention.

The round of grants is the second of its kind. The state announced nearly $9 million in grants to almost 100 municipalities in June.

The federal government must renew waivers for programs that increase access to school meals amid the coronavirus pandemic, Maine's Democratic congresswoman said.

U.S. Rep. Chellie Pingree joined more than 100 members of Congress in a letter to U.S. Department of Agriculture Secretary Sonny Perdue that called for the department to extend flexibility in school food programs through the coming school year. Pingree said “school meals programs are an essential lifeline" for students in Maine and the pandemic has worsened food insecurity for children.

The letter specifically calls for the USDA to renew waivers that enable the implementation of the Summer Food Service Program and the Seamless Summer Option. The lawmakers also want the department to waive area eligibility requirements for the entire coming school year.

The Congress members said some schools won't be able to keep providing meals to students next year without the added flexibility.

A group of U.S. senators including Republican Sen. Susan Collins and independent Sen. Angus King of Maine made a similar push last week.

Maine public health authorities reported an increase of only one case of the virus on Tuesday. The total number of reported cases is more than 4,000. The Maine Center for Disease Control and Prevention also reported one death. The state has had 126 deaths because of the virus.

Maine farmers have been awarded more than $14 million to help with the economic harm caused by the pandemic.

The money is via the CARES Act, Republican Sen. Susan Collins said. She said about half the aid for Maine farmers is going to dairy farmers. More than $5 million is slated for specialty crop farmers, and the rest is set aside for livestock farmers and others.