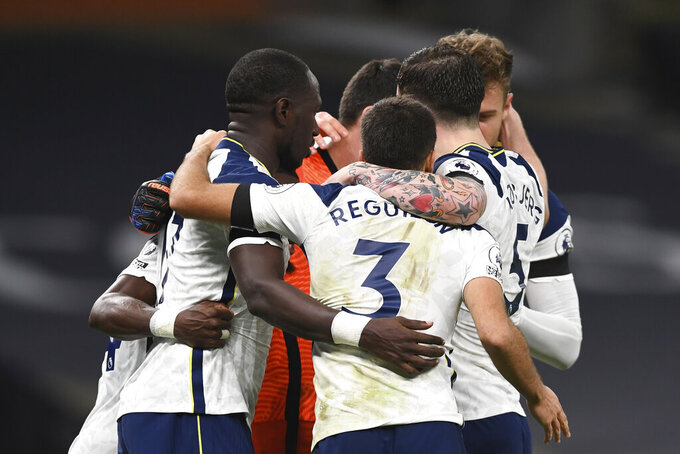 A look at what’s happening in the Europa League on Thursday:

Tottenham will be without Toby Alderweireld for the match against Bulgarian team Ludogorets, though the adductor injury sustained by the Belgium defender at the weekend is not as bad as first feared. “He will have time to be out, but not like a month which was immediately what we thought. I would say between two and four weeks," Tottenham manager Jose Mourinho said. “It’s bad news, he was playing his best football." A slew of Ludogorets players tested positive for the coronavirus this month but Mourinho insisted the game was in no danger of being canceled. “Of the team that comes, I believe only two players who played against us (in Tottenham's 3-1 win three weeks ago) are not playing. Apart from that, the other nine are in the list and ready to play." Tottenham is on six points along with Royal Antwerp and LASK in Group J. Ludogorets has no points.

An outbreak of COVID-19 in the Benfica camp has led coach Jorge Jesus to call up five youngsters for the trip to Scotland to play Rangers. Darwin Nunez, who scored Benfica's last-gasp equalizer in the 3-3 draw between the teams in their first meeting this month, along with midfielders Adel Taarabt and Julian Weigl are among those being quarantined after testing positive for the coronavirus. To make matters worse, Andre Almeida, Pedrinho, Jean-Clair Todibo and Nuno Tavares are all out injured for the Portuguese team while former Manchester City defender Nicolas Otamendi is suspended. Benfica and Rangers have seven points, four more than third-place Lech Poznan in Group D.

Real Sociedad will be without playmaker David Silva for the match against AZ Alkmaar. The former Spain and Manchester City player is nursing a muscle injury in his left leg. The teams are level on six points each in Group F. Napoli, which is mourning the death of Diego Maradona, is also on six points ahead of its home match against last-place Rijeka, which has zero points after three matches. Sociedad is in great form in Spain, leading the league standings with 23 points from 10 matches and having won the last six in a row.