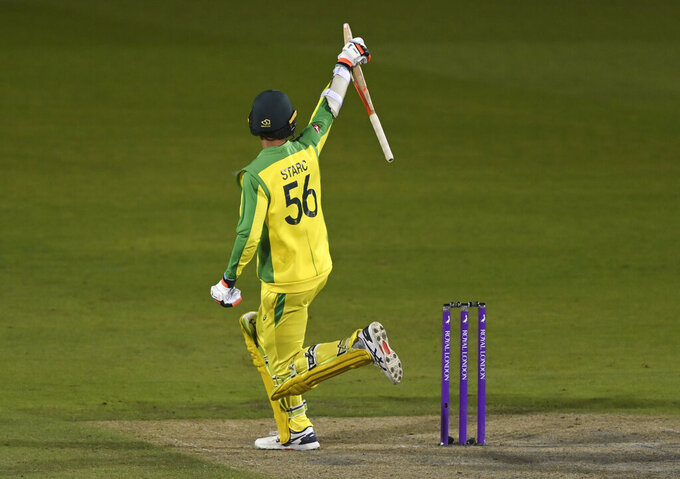 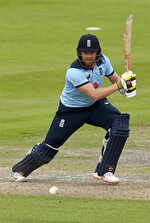 MANCHESTER, England (AP) — Glenn Maxwell and Alex Carey struck centuries in a 212-run stand to help Australia reach a record target of 303 at Old Trafford with two balls to spare and secure a series win over World Cup champion England on Wednesday.

Mitchell Starc started the third and deciding ODI by taking wickets from the first two balls of the match, and ended it by hitting a six and sweeping a four for the winning runs in the last over the Australians consigned England to its first loss in a bilateral ODI series at home since 2015.

It was a record ODI chase at the Manchester venue — bettering England's 286-4 against New Zealand in 1986 in a 60-over match. It was a positive finish for the white-ball tour for the Australians, who were edged 2-1 by England in the preceding Twenty20 series.

Replying to 302-7, Australia slumped to 73-5 only for Carey and Maxwell to produce Australia's highest sixth-wicket partnership in ODIs and swing momentum. While Carey was the steadier of the pair with his 106 off 114 balls, Maxwell delivered some trademark big hits — he had seven sixes, including one from the second ball he faced from Jofra Archer — for his 90-ball 108.

“Maxy is in the team to do a specific role, and that's to be able to take the game away from opposition but also be that guy to counterattack and swing momentum,” Australia captain Aaron Finch said. “ I don't think there's many bowlers in the world that can trouble him when he is having one of those days. The way he navigated that innings and took it deeper and deeper ... he did that perfectly.”

When he reached 45, he became the fastest to batter to post 3,000 career runs in terms of balls faced in ODI history.

Maxwell eventually fell with 15 balls left and Australia needed 14 off the last two overs. Carey couldn't see the tourists home, either, departing for 106 to a fabulous diving catch by Mark Wood off the seventh-to-last ball.

Starc entered, with Australia needing 10 off the last over bowled by legspinner Adil Rashid, and smashed his first ball down the ground for six. After two singles, Starc swept Rashid to the boundary to seal a three-wicket win.

“Australia were too good for us today,” England captain Eoin Morgan said, “starting in the first over.”

Indeed, England, which won the toss, did well to reach 300 after recovering from losing the wickets of Jason Roy and Joe Root from the opening two balls of the match bowled by Starc. Jonny Bairstow was England's star, hitting 112 for his 10th ODI hundred with a nonchalant flicked six off Pat Cummins bringing up three figures.

Playing without the injured Steve Smith, the Aussies were in trouble after Marnus Labuschagne’s run-out left them five wickets down, with just bowlers to follow Maxwell.

England will regret a no-ball by Archer — off which he had Carey caught at third man when on 9. Wicketkeeper Jos Buttler also dropped a tough chance when Maxwell was on 44.

“Small opportunities that we might have taken advantage of might have changed the game," Morgan said, "but when you’ve been beaten by a better side, you have to put your hand up.”

Maxwell said he took a “hit or bust” mentality into his partnership with Carey, going in with the score at 70-5.

“Once we started to build that partnership, took a couple of risks early and got away with them, I was able to ride with that momentum,"he said. “For that to grow into a really big partnership and get us to the point where Starcy and Cummo could get us over the line at the end was pretty awesome.”

It was England's only series loss of its international summer — during which all of its games have been played in a bio-secure bubble without fans because of restrictions in place for the COVID-19 pandemic — after taking on the West Indies, Ireland, Pakistan and Australia in various formats.

Some of the Australian players will now play in the Indian Premier League in the United Arab Emirates before heading home for the southern summer, and those without IPL contracts will return to Australia for a period of quarantine.