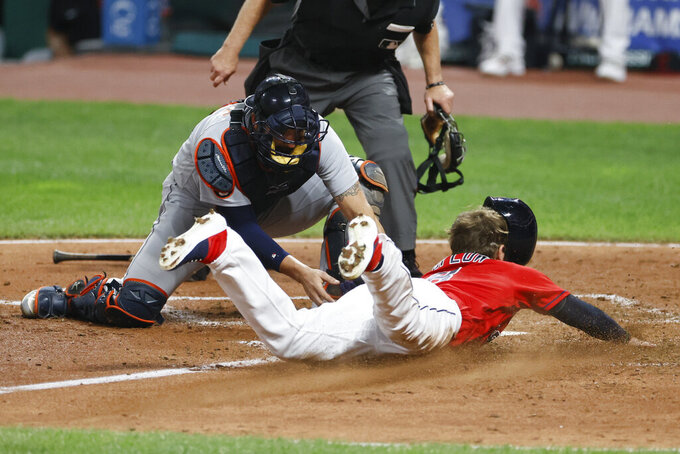 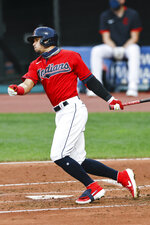 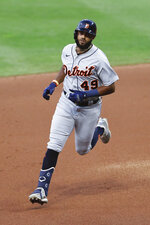 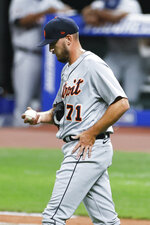 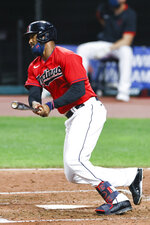 CLEVELAND (AP) — Triston McKenzie struck out 10 in his major league debut and Domingo Santana delivered a bases-clearing double in the sixth, lifting the Cleveland Indians to a 6-1 win over the Detroit Tigers on Saturday night.

“I’m still floating about that right now,” McKenzie said. “Growing up in south Florida, he’s literally a living legend down there. To be able to face him and to strike him out, it’s huge for me.”

The 6-foot-5, 165-pounder had not pitched in an actual game since Aug. 30, 2018 and missed all of last season with a strained right rotator cuff and right pectoral strain.

“That’s a sore subject because Willi had some advance knowledge,” he said, laughing. “Me and him are actually very close, so we’re going to talk about that.”

Santana’s two-out double came off reliever John Schreiber and gave Cleveland a 3-1 lead that Pérez followed with an RBI single. Carlos Santana had a sacrifice fly in the seventh and César Hernández singled in the Indians’ final run in the eighth.

Matthew Boyd (0-4) pitched a season-high 5 1/3 innings for Detroit but remained winless in seven starts dating to Sept. 22, 2019. The left-hander surrendered two runs — both on Santana’s shot to the gap in left-center — and struck out six.

“That was the Matt Boyd that we’ve seen, the good Matt Boyd throwing,” Tigers manager Ron Gardenhire said. “He was in command out there, wasn’t taking nine hours to throw every pitch. He gave us an opportunity, but we didn’t score enough runs.”

Francisco Lindor and Hernández each had three hits for Cleveland, which has won 21 of its last 22 games against Detroit. Cabrera went 0 for 4 with three strikeouts, dropping his average to .176.

First base coach Sandy Alomar Jr. managed the Indians with Terry Francona recovering from a medical procedure for a gastrointestinal ailment. The 61-year-old underwent the procedure Friday at Cleveland Clinic and has missed 16 games this season.

McKenzie filled a hole in the rotation created when Mike Clevinger and Zach Plesac were demoted to the alternate training site after violating league rules by leaving the team hotel in Chicago, risking exposure to COVID-19.

Clevinger and Plesac are eligible to be recalled next week, but the Indians have been noncommittal on the subject.

“We’re still working through it, but with that performance tonight, I don’t see why Triston wouldn’t start again,” Alomar said. “He didn’t look nervous at all. He was fantastic and was very excited that we won.”

EYE IN THE SKY

Indians 3B prospect Nolan Jones watched good friend McKenzie’s debut from atop a parking garage across the street. Television cameras quickly spotted him working around the MLB rule that bans non-roster players from the ballpark for preventative health reasons.

“Nolan didn’t have to do that, and I’ll be there for him when he plays his first game here, too,” McKenzie said. “There was actually a lot of hidden support for me out there tonight.”

Tigers: RHP Iván Nova (right triceps tendinitis) is still experiencing soreness and has yet to resume throwing. He was placed on the 10-day IL on Aug. 15.

Indians: OF Delino DeShields (left hip soreness) exited the game in the sixth inning and was replaced in center by Greg Allen. DeShields went 0 for 2.

Tigers: LHP Tarik Skubal (0-1, 18.00 ERA) allowed four runs over two innings in his big league debut Aug. 18 against the White Sox. He struck out one and walked one in starting Detroit’s 10-4 loss at Chicago.