McMaster: Get tested for COVID-19 before Thanksgiving 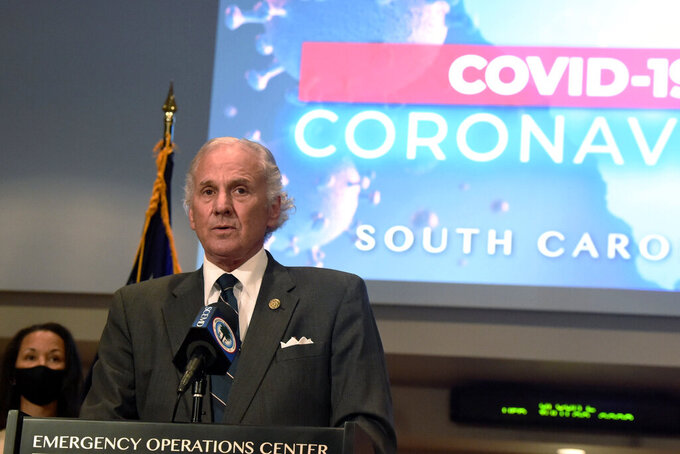 COLUMBIA, S.C. (AP) — In his first public briefing on the coronavirus pandemic in more than two months, South Carolina Gov. Henry McMaster on Thursday doubled down on his pledge to not impose new restrictions to curb COVID-19.

Instead, the governor debuted a new slogan ahead of the Thanksgiving holiday, calling on South Carolinians to take personal responsibility by wearing masks, washing their hands and otherwise trying to limit the spread of the coronavirus.

“Get tested before turkey,” McMaster said. “It’s easy to remember.”

McMaster, whose last public coronavirus briefing was on Sept. 10, noted the state has about 300 testing locations and that people could easily get test results back before Thanksgiving. He also suggested people adopt measures such as gathering outside, dividing a large table of guests into two smaller tables, or making a short visit to elderly family members to deliver food.

Though McMaster has sustained a state of emergency since March, the governor says he won't impose a mask order or restrict businesses further. He also lifted rules requiring restaurants to operate at 50% capacity last month. The state still has some restrictions in place on large gatherings.

South Carolina, which saw a peak in COVID-19 cases in July, has not seen as marked a jump in recent cases as other states have. Still, the rolling average number of daily new cases has increased by 439 over the past two weeks, an increase of 41.6%, according to researchers from Johns Hopkins.

Health officials reported 1,410 cases Thursday, and the state has tallied 189,251 confirmed cases since the start of the outbreak in March. A total of 3,924 have died from the virus.

About 81% of hospital beds are occupied, according to health department data.

The kits, in addition to $10 million worth of personal protective equipment purchased for schools earlier this year, will help schools stay open for in-person learning, McMaster added.

In Greenville, the state's largest school district warned on Thursday morning that a spike in cases over the holiday season could force schools to revert all classes back to virtual learning. Facing a shortage of substitutes, the district has deployed counselors and administrators to fill in for quarantined and sick teachers.

Greenville Public Schools says statistical analyses show the risk of getting COVID-19 for educators and students in the county is lower than in the community at large. Still, the district is averaging about 150 vacancies daily due to employees isolating and quarantining.

As of Tuesday, the state health department had identified more than 3,200 COVID-19 cases among students and school employees across South Carolina's public and private schools over the past 30 days.

And towns and counties are still wrangling with emergency mask mandates, many of which have to be renewed every few weeks or months.

On Tuesday, Horry County rejected a motion to reinstate a mask mandate that expired last month; the city of Aiken was set to debate making its recently expired mandate more permanent.