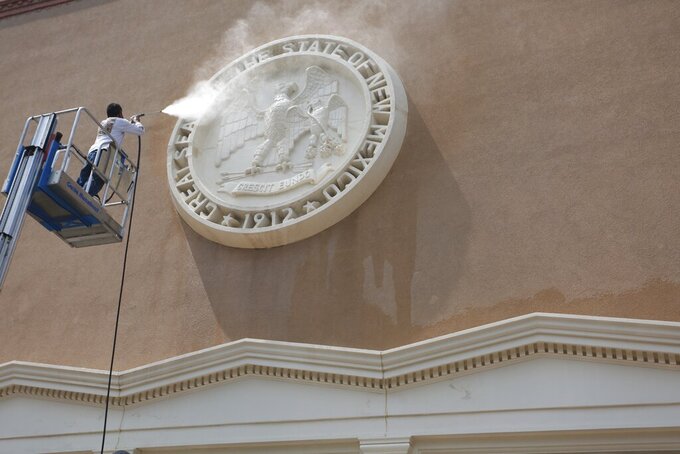 A maintenance worker power-washes the state seal at an entrance of the capitol building on Monday, Aug. 24, 2020, in Santa Fe, New Mexico. The building has been closed to the public since the onset of the coronavirus pandemic. Legislative meetings and gubernatorial addresses are broadcast online. (AP Photo/Cedar Attanasio)

SANTA FE, N.M. (AP) — Enrollment in Medicaid has increased by nearly 7% in New Mexico since the outset of the coronavirus pandemic as employers shed jobs and more families descend into poverty, state health regulators told a panel of legislators Friday.

At the same time, he said the current 6.2% boost in federal matching funds is inadequate to keep up with rebounding demand for medical services under Medicaid and could end abruptly at the discretion of federal health regulators.

He warned that changes to a federal public health emergency declaration could thrust as much as $150 million in annual Medicaid obligations into the state general fund. He said it is too soon to know how the federal government will proceed in a presidential election year.

“I think our congressional delegation is well aware of the need to sustain funding in the Medicaid program through at least June of 2021,” he said.

The federal government now provides $4.15 for every dollar in state general fund spending on Medicaid spending, up from $3.54 before the pandemic, Medicaid Assistance Director Nicole Comeaux told legislators.

That federal support has enormous implications for public health, where more than half of children get health care through Medicaid. The program covers 72% of births statewide.

Gov. Michelle Lujan Grisham is asking most executive agencies to trim general fund spending by 5% for the coming fiscal year as the state confronts a nearly billion-dollar annual deficit. Scrase said the target for cuts at Human Service Department is 3%. The agency is a conduit for multibillion-dollar annual federal spending on health care, food stamps and emergency income assistance.

Undocumented immigrants who test positive for COVID-19 won't receive Medicaid support, Scrase said. Those resources will come from the Health Resources and Services Administration, a federal agency that attends to people who are geographically isolated and medically vulnerable.

Scrase is warning that COVID-19 infections are disproportionately afflicting the poor, a trend that is likely to drive up Medicaid spending. Just over 1% of the state's population has tested positive.

Medicaid enrollment among Native Americans has increased by 3% since March, or about 4,000 people, even though indigenous communities can opt for federally subsidized care through Indian Health Services.

— The state Supreme Court rejected without explanation a complaint by the governor's office against Lea County Sheriff Corey Helton on accusations that his deputies coerced restaurants into opening in violation of a public health order. Helton's office denied any action to open restaurants and challenged the governor's authority over the sheriff's department. The state's ban on indoor dining service was lifted in late August.

— The Navajo Nation, which sprawls across Arizona, New Mexico and Utah, on Friday reported 10 new cases and 16 newly reported deaths that occurred between the months of May and August, according to state disease surveillance systems. The total number of virus-related deaths on the sprawling reservation is now 520, and the total number of positive COVID-19 cases is now 9,883.

— Health Secretary Kathy Kunkel on Friday issued a public health order that will limit the number of voters allowed at any one time at polling locations around the state as a way to limit spread of the coronavirus this fall.

Under the order, polling sites can accommodate four voters at once or 25% of maximum occupancy — whichever is greater. Only two voters at a time will be allowed at mobile polling stations.

Kunkel said the state's election code requires polling sites to remain accessible to the public so officials have to ensure that everyone casting a ballot can do so safely.

"Our job is to make these facilities as safe as possible while strongly encouraging New Mexicans to take every precaution while casting their ballot this fall,” Kunkel said.

In-person early voting begins Oct. 17 and continues through Oct. 31. Election Day is Nov. 3, with in-person polling locations open in each county from 7 a.m. to 7 p.m.

— Officials reported more than 25,900 COVID-19 cases since the pandemic began. Nearly 800 deaths in the state have been linked to the virus.