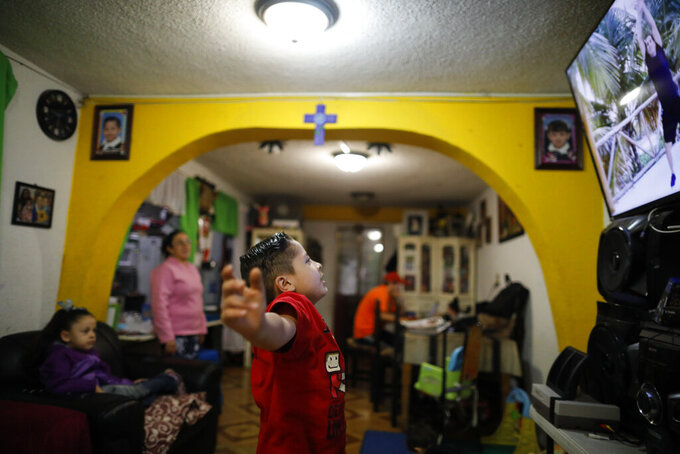 Six-year-old Santi does jumping jacks in front of a monitor during a P.E. segment of a televised kindergarten class, as his stay-at-home mother Denisse and five-year-old sister Liz look on and his father Luis works online at the dining room table, as students return to classes but not schools in Mexico City, Monday, Aug. 24, 2020. A system cobbling together online classes, instruction broadcast on cable television channels and radio programming in indigenous languages for the most remote, will attempt to keep students from missing out. (AP Photo/Rebecca Blackwell)

VERACRUZ, Mexico (AP) — Millions of Mexican school children returned to classes, but not schools, on Monday as the government attempted to start a new school year despite the challenges of the pandemic.

A system cobbling together online classes, instruction broadcast on television channels and radio programming in Indigenous languages is meant to keep students from missing out in a country already defined by deep inequalities.

As other countries around the world have already discovered, there is no perfect replacement for in-person classes and for some students it marked an early end to their academic careers.

Education Secretary Esteban Moctezuma noted Monday that other countries have opened their schools and seen outbreaks, while others have outright cancelled the school year.

Moctezuma said officials decided to rely on television because it has a far greater penetration that the internet. Still, questions abound about how families, especially those with multiple children, will juggle the classes along with jobs that could force both parents out of the home — often taking their children along with them.

More than half of Mexicans work in the informal economy, jobs that often don’t allow them to work from home.

There is a strong fear that the pandemic will spell the end of education for many students who will stop their studies. Many private schools have closed as cash-strapped parents stopped making tuition payments.

In the Gulf coast city of Veracruz, 5-year-old Leonardo Herrera Montoro started the first grade Monday. In preparation for the new school year, his family switched him from private to public school, rearranged his bedroom, set up a desk with computer and hung a television from the ceiling, said his mother 29-year-old Martha Montoro.

He started watching his scheduled classes on the TV — a physical education segment had him doing lunges alongside his mother — but glitches pushed him to stream the rest of his school day on the computer. His mother also hired a teacher to act as a private tutor and nanny to keep him on task and supplement the classes with other activities, because both parents work outside the home.

While in the same city, 17-year-old Guillermo Argueta Luna was helping his grandfather prepare his fishing boat for a day at sea instead of starting the new school year.

At the end of the last school year, Guillermo was going to an internet shop every day to keep up with his classes. He wanted to eventually track into a technical career to become an underwater welder and land a job working on the oil platforms spread offshore.

“It is very different to be with a live teacher in front of you, with all your classmates, than to be on a video call,” Guillermo said. “There are times when the internet is saturated, so many are connected from home that it gets stuck.”

It was also an added expense.

“If they gave me 30 (pesos) for school a day, now they have to give me 50 or 60, double the cost,” Guillermo said. “Well, it was very difficult, that’s why I decided to drop out and come to work, so that I can help my family save money.”

His grandfather, Guillermo Luna Mendoza, said that if he didn’t check up on his grandson he wouldn’t always take advantage of his online classes. “So I chose to bring him with me instead so that he could help me out,” he said.

Manuel López Pereyra, a researcher in the education department of Mexico City’s Iberoamerican University, said the pandemic has revealed the shortcomings of Mexico’s education system, as it has in other countries.

“There’s an absence of effective education policies that can connect the needs of the teachers with those of the families, as well as the girls and boys,” he said. The interaction of a classroom environment isn’t replaced by online courses, much less passive viewing of television instruction.

“These educational programs must be accompanied by a teacher,” said López, who is studying the impact of pandemic on children’s learning. “They can’t be alone; they need a person, a pedgogy that allows the girls and boys to use the elements they learn on television.” He noted that many of the children’s parents or caregivers are not equipped to provide that support. “So we leave them there alone.”

Moctezuma said Monday that the education ministry had set up 160 phone lines for students seeking that support or tutoring. However, with some 30 million students, those resources would be stretched thin. He advised parents to maintain contact with their children’s teachers.