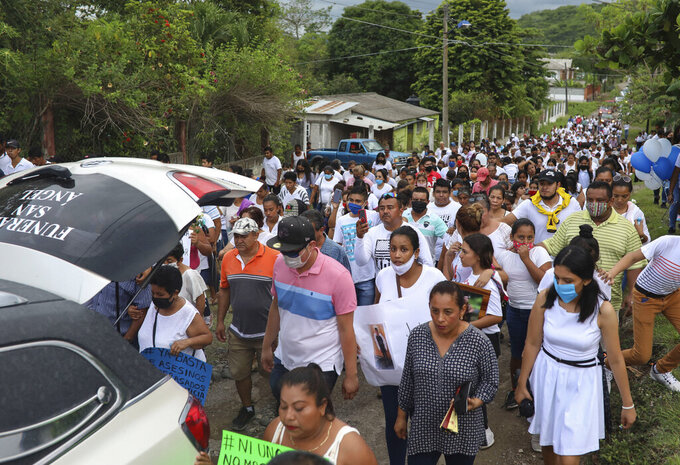 The hearse carrying the remains of Alexander Martinez is followed by a multitude of family and friends during his funeral in Acatlan de Perez Figueroa, Mexico, Thursday, June 11, 2020. Hundreds of residents of this town in southern Mexico bid farewell amid anger and tears to Alexander Martinez, a 16-year-old Mexican-American boy shot dead by local police. (AP Photo/Felix Marquez)

MEXICO CITY (AP) — The mayors of two Mexican towns where police killings of young civilians in recent weeks are under investigation are themselves being looked at for suspicious financial movements that could be linked to organized crime, a federal official said Tuesday.

The official, who was not authorized to be quoted by name, said authorities have frozen the bank accounts of the mayor of Ixtlahuacán de los Membrillos in western Jalisco state as part of the “Agave Azul” operation aimed at money laundering, allegedly for the Jalisco drug cartel. About 2,000 people and companies have had accounts frozen in the operation, the official said.

Ixtlahuacán de los Membrillos, just south of Guadalajara, is where a young man was allegedly beaten to death in May while in police custody after officers detained him for not wearing a face mask during the coronavirus pandemic. The death led to protests in Guadalajara, the state capital.

Jalisco state officials have said Giovanni López was detained for a misdemeanor equivalent to disturbing the peace or resisting arrest. A video of his detention shows municipal police wrestling him into a patrol truck as residents argue with officers about excessive use of force and rules requiring face masks, a measure designed to slow the spread of the coronavirus. Hours later he was taken from his cell for medical treatment and died.

The federal official said the other mayor under investigation is in Acatlán de Pérez Figueroa in the southern state of Oaxaca, near the border with the neighboring state of Veracruz.

A 16-year-old Mexican-American boy was shot dead by local police in that town earlier in June, touching off protests by residents. Alexander Martínez Gómez was born in North Carolina, but he had been living with his mother in Acatlán.

The dead teen and another youth who was wounded were in a group of about nine young people when the shooting happened. A local police officer claimed the teens on motorcycles failed to stop at a checkpoint. State prosecutors have raised questions about the town's version of events.