Michigan diner owner out of jail after ignoring virus orders 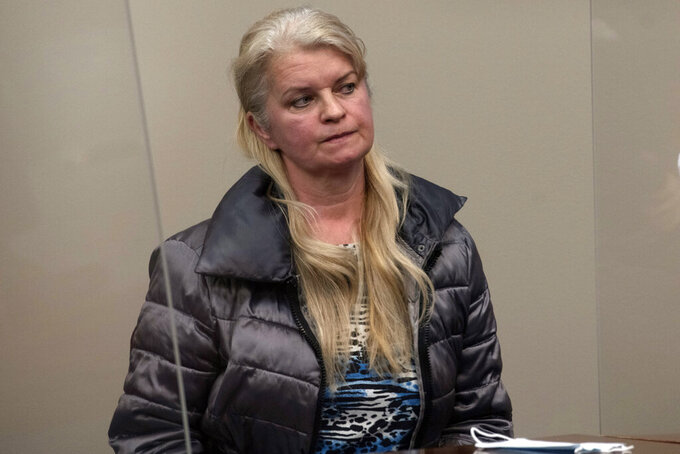 Marlena Pavlos-Hackney sits in the courtroom during her arraignment, Friday March, 19, 2021, at the 30th Judicial Circuit Court in Lansing, Mich. Pavlos-Hackney, a western Michigan restaurant owner, was arrested before dawn Friday and hauled to jail, a dramatic turn in a monthslong dispute over her persistent refusal to comply with orders and restrictions tied to the coronavirus. Pavlos-Hackney, 55, will remain in jail until she pays $7,500 and authorities confirm that Marlena’s Bistro and Pizzeria in Holland, Mich., is closed, a judge said. (Nicole Hester/Ann Arbor News via AP)

DETROIT (AP) — A Michigan restaurant owner who likened the state's coronavirus restrictions to her childhood in communist Eastern Europe was released Tuesday after four nights in jail for ignoring orders to shut down.

Marlena Pavlos-Hackney paid a $15,000 fine and satisfied authorities that Marlena's Bistro and Pizzeria in Holland finally would remain closed while it lacks a food license. Her supporters boarded up the doors but also turned the building into a symbol of defiance with signs such as “Stop The Injustice.”

Some bars, restaurants, gyms and other businesses have been fined for violating Michigan's restrictions during the pandemic. But Pavlos-Hackney's arrest before dawn Friday broke new ground and angered her allies, especially Republican lawmakers.

Pavlos-Hackney is “Michigan’s first political prisoner of the pandemic," state Sen. Tom Barrett said on the Senate floor Tuesday, even offering to take her spot in jail.

“Come in the broad daylight. I just need a minute to pack my toothbrush,” Barrett said, aiming his words at Democratic Gov. Gretchen Whitmer.

State regulators yanked Pavlos-Hackney’s food license in January for serving indoor diners and breaking other rules related to preventing the spread of COVID-19. But the restaurant, 180 miles (290 kilometers) west of Detroit in western Michigan, stayed open — and customers flocked there.

A judge ultimately ordered her arrest, which was executed during a traffic stop. Despite warnings, Pavlos-Hackney had refused to turn herself in to face a contempt hearing.

“We don’t want this country to be a communist regime that’s going to dictate what we can do and what we cannot do,” the 55-year-old native of Poland said last week.

Michigan's ban on indoor dining was lifted on Feb. 1 after 10 weeks, although there are capacity limits in bars and restaurants.

“She has put the community at risk. We are in the middle of a pandemic,” the judge said Friday in ordering jail.