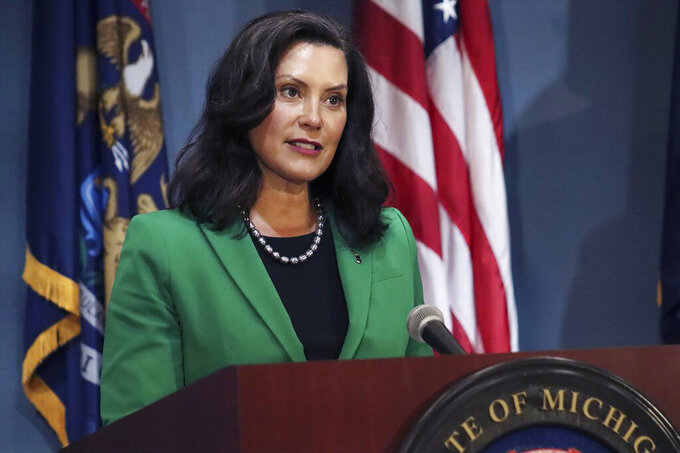 FILE - In this Friday, Aug. 14, 2020, file photo provided by the Michigan Office of the Governor, Gov. Gretchen Whitmer addresses the state during a speech in Lansing, Mich. A man charged in an alleged conspiracy to kidnap Whitmer also made threatening online comments about President Donald Trump, former presidents Barack Obama and Bill Clinton and other prominent political figures, an FBI agent said in a federal court filing, of which a copy was obtained by The Associated Press, Wednesday, Oct. 28, 2020. (Michigan Office of the Governor via AP, File)

The state Department of Health and Human Services revised and extended mask and other emergency rules it issued weeks ago in the wake of a state Supreme Court ruling that declared unconstitutional a law used by the Democratic governor to control the pandemic with various orders.

Effective immediately, indoor venues without fixed seating must limit gatherings such as weddings and parties to no more than 50 people — down from a maximum of 500. Restaurants, bars and other venues must seat no more than six people at a table. All dine-in establishments must keep customers' names and phone numbers for contact-tracing purposes, starting Monday.

The state said indoor settings are as much as 20 times more likely to drive COVID-19 outbreaks than outdoor settings. It also recommended that people keep their voices down at social events, warning that shouting or cheering can increase the virus in the air by up to 30 times.

As before, violators can face a misdemeanor and fines, including up to $1,000 for each violation or day that a violation continues.

Robert Gordon, director of the health department, said educating residents to come into voluntary compliance is preferred over punishing them.

“The heart of our effort to beat COVID will be in the hearts and minds of individual Michiganders... choosing to protect human life and to act on the science,” he told reporters in a virtual news conference. The focus of the order, he said, is to reduce the size of non-residential indoor gatherings at places without fixed seating — banquets, weddings and conferences where people move around, chat, dance, eat and drink.

“We urge folks to get together outside whenever that is possible. The risks are much higher inside than outside," Gordon said. “If you are inside, include no more than two households and never more than 10 people.”

Under the order, a 17-county area in the upper Lower Peninsula that was in phase five joins Michigan's seven other regions in phase four. That means masks are mandatory in K-12 classrooms, people who can work remotely are required to do so, and gatherings at venues must be slightly smaller.

The latest average positivity rate in Michigan is 5.52%, up from 3.75% two weeks ago. State health departments are calculating positivity rates differently across the country, but for Michigan The Associated Press calculates the rate by dividing new cases by test specimens using data from The COVID Tracking Project.

Dr. Joneigh Khaldun, the state's chief medical executive, said unlike in the spring, most hospitalizations for the virus are now outside metro Detroit.

“In relation to the size and scope of the industry, which serves millions of people every day and employs several hundred thousand more, this well-intended effort is more likely to result in job loss, foreclosure and fewer restaurants than it will prevent transmission,” he said.

A Christian school and a chiropractor's office recently filed lawsuits challenging face covering and gathering limits in the epidemic order, which Gordon issued under a different law whose origins date back a century.

Since the high court decision invalidating Whitmer's own orders, she and the Republican-led Legislature have enacted several laws related to the pandemic. But some GOP leaders who previously challenged her in court quickly opposed codifying the mask mandate and business capacity restrictions, though this week they asked to meet with the governor and Democratic legislative leaders to discuss rising COVID-19 cases.

Sen. Jim Stamas, a Midland Republican, on Thursday accused Whitmer of continuing to “act unilaterally” and urged her administration to share with legislators “specific data” that shaped the latest order.