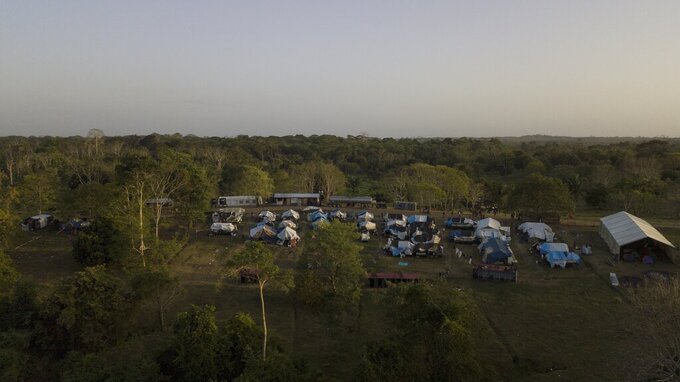 Tents stand at a migrant camp amid the new coronavirus pandemic in San Vicente, Darien province, Panama, Tuesday, Feb. 9, 2021. Panama is allowing hundreds of migrants stranded because of the pandemic, to move to the border with Costa Rica, after just reopening its land borders. (AP Photo/Arnulfo Franco) 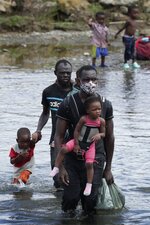 BAJO CHIQUITO, Panama (AP) — After nearly a year stalled in migrant camps at the edge of the jungle, hundreds of migrants have begun to move across Panama and into neighboring Costa Rica in recent weeks.

But on Jan. 29, Panama announced it was reopening its land borders, setting off a surge of migration through the dense jungle covering the Colombia-Panama border.

On Wednesday afternoon, more than 50 migrants trudged out of the dense Darien jungle into the village of Bajo Chiquito, the first community they encountered after days of walking. Pregnant women, adults carrying babies in their arms and others with bags of clothing balanced atop their heads forded a river and then scrambled up the bank to waiting border police.

They were told to line up to register their entry into Panama. No measures — temperature checks or social distancing — against coronavirus infection were on display. Only one man carrying his daughter wore a mask.

Kerline Mervilier, a 29-year-old from Haiti, made it into the line and collapsed complaining of pain in her legs. She had traveled with boyfriend Isaac Cadichon from Brazil. She left Haiti for Brazil in December 2019, but after losing her job in a beauty salon there decided to migrate again.

They started to walk into the jungle in Colombia on Friday, emerging in Panama five days later. They were among 287 migrants who entered Panama Wednesday, according to border police.

“I hope to get to a destination where I can find work,” Mervilier said, holding her passport and that of her boyfriend in her hands. Her mother lives in New Jersey. “My country is a tragedy and forces us to look for a new life. We had to climb mountains. They assaulted me and stole $160 while I walked.”

There were some 400 migrants in Bajo Chiquito on Wednesday and more have been arriving every day as others continue on. It’s a three-hour boat ride to the nearest highway. They recover from their jungle walk in an array of colorful tents pitched beside the border police station and on a basketball court.

Many of the migrants are Haitians, but others come of Cuba, Venezuela and various African and Asian countries.

As they continue into Panama, many pass through a new migrant camp in San Vicente, also in Darien, but reachable by road.

Paul Saenz, a 27-year-old electrician from Haiti, flew to Ecuador in December. He then took a bus to Colombia near the Panama border, joined other Haitian migrants and crossed the jungle into Panama in three days. He said Tuesday he wanted to make it to the U.S. to help his family back in Haiti.

The new U.S. administration with a kinder tone toward immigrants gave him hope.

“I hope it goes well for us,” he said. “This president (Joe Biden) is better than the other who was a little harder.”

Ovidia Fernández, left Havana, Cuba two years ago with her daughter Anabel. They spent time in Guyana, Brazil, Peru, Ecuador and Colombia. They arrived in San Vicente on Sunday after walking through the jungle for 13 days.

“There could be a chance of entering the United States,” she said. “There are people who believe that with the change (of administration) there’s hope.”

José Bernal, local commissioner for Panama’s National Borders Service said the flow of migrants typically picks up during this time of year, when the rains pause. He said the pandemic restrictions sharply decreased the number of migrants who passed through last year to 8,000, down from 24,000 in 2019.

“The American dream continues driving people to move despite the pandemic,” Bernal said.

Idiam Osorio, a specialist with the U.N.’s International Organization for Migration in Panama, said the change of government in the U.S. was just one among a variety of factors spurring people to migrate. “We don’t dismiss that this issue (the new U.S. administration) is also connected to the growing motivation of migrants who have started to move, but the reasons are diverse, including economic (reasons),” she said.

Saenz and other recent arrivals stay at two migrant camps in Laja Blanca and San Vicente in the Darien area that borders Colombia. The first is made up of tents and portable toilets, while the second, which opened in late September, has small prefabricated buildings for the migrants.

Panama’s National Immigration Service said that since Jan. 29, some 551 migrants have left those camps and moved to Panama’s border with Costa Rica, something they previously had not been allowed to do during the pandemic.

The agency also says that only 168 migrants were currently in its camp in Los Planes, Chiriqui near that border, suggesting that the others had continued on into Costa Rica.

Officials said Tuesday that an estimated 1,000 migrants were in Darien, including 276 of whom arrived Monday night to small community of Bajo Chiquito, the first populated area migrants emerging from the jungle encounter. Immigration officials said they expect another 800 migrants to arrive from Colombia in the coming days.

Haitian Wisnel Olly, 41, had recently arrived with his wife and their 4-month-old twins. The twins were born in Chile where the family had lived for the past two years.

Unlike Saenz, Olly said it took his family two weeks to cross the Darien jungle. Their goal was to continue on as soon as possible with the goal of making it to Mexico “where we’ll be taken care of.”