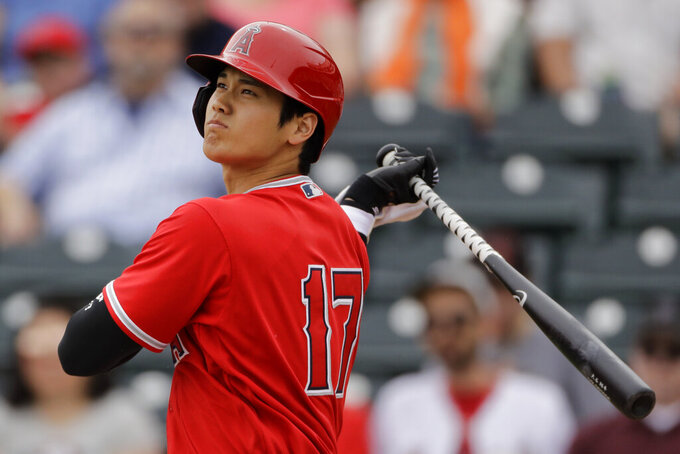 The Los Angeles Angels' three-time AL MVP also isn't sure he'll still be in uniform in October if the Angels capitalize on the expanded opportunity by landing a playoff berth.

Not much is certain about this unique baseball summer, but Trout is betting he'll be glad he took time out from impending fatherhood to chase a playoff berth with the revitalized Angels and new manager Joe Maddon.

“I love playing this game,” Trout said when asked why he decided to suit up despite serious misgivings about baseball's attempt to play through the coronavirus pandemic.

“We want to play, and it’s going to come down to how safe we’re going to be," he added. "If there’s an outbreak or something happens these next few weeks, you’ve got to reconsider. (But) I love this game. I think everyone wants baseball back. It’s a crazy situation.”

In a normal season, Trout would be thrilled about the chance to team up with Anthony Rendon, the Angels' new $245 million third baseman. The Angels' batting lineup might be the best in Trout's career, with the dynamic duo surrounded by Albert Pujols, Justin Upton, All-Star Tommy La Stella and designated hitter Shohei Ohtani.

A short season and an expanded playoff format could help the Angels, whose mediocre pitching staff was thoroughly worn down last season. Trout feels confident the Angels can put him in position for his first career playoff victory if the game stays safe and he elects to stick around for the full season.

“I think the team that stays the safest and the healthiest is going to have the edge,” Trout said. “We’ve got a lot of guys back to full health. We’re going to have a full squad, and it’s going to be fun. I’m looking forward to this 60-game stretch.”

The majors' most serious two-way player in several decades is back. Ohtani appears to be fully recovered from Tommy John surgery and eager to resume his roles in the Angels' rotation and in their lineup as the designated hitter. Ohtani made only 10 mound starts during his Rookie of the Year season in 2018, so he claims to be less than certain that he can be an effective full-time starter. Maddon and the Angels don't share those concerns, and they're hoping Ohtani can make one start per week on the mound in the short season.

As they did in 2018, the Angels likely will use a six-man rotation partly to limit Ohtani's starts. After Los Angeles had one of the majors' worst rotations last season, it added veterans Dylan Bundy and Julio Teherán in the offseason. They're both expected to eat innings this season, but Teherán is quite late reporting to camp from his native Colombia, and the Angels haven't disclosed the reason. Griffin Canning and opening day starter Andrew Heaney also will be in the rotation. Maddon and new pitching coach Mickey Callaway could assign starts to newcomer Matt Andriese, Félix Peña or Patrick Sandoval.

Owner Arte Moreno swooped in to bring home Maddon after the veteran manager left the Chicago Cubs. Maddon spent the first three decades of his baseball life working for the Angels as a player and coach, and he brings pride in this sometimes-overlooked franchise's tradition along with his trademark enthusiasm and active mind. Showing zero signs of slowing down at 66, Maddon is determined to correct the Angels' recent direction by getting the most out of this high-priced roster.

Pujols is likely to be the majors' oldest player this season after turning 40 last winter. The first baseman will be chasing more milestones in his 20th big league campaign and the ninth of his 10-year, $240 million contract with the Angels. With 656 career homers, he trails Willie Mays (660) for fifth place in history. Pujols would rather have his first playoff victory in a halo, and he hopes to contribute steadily after a long offseason with no surgical setbacks.

Top prospect Jo Adell was tipped to play his way onto the big league roster this summer, but a 60-game season might not be enough time. The Angels don't have much other young talent expected to make a major impact, but left-hander Reid Detmers is on the 60-man roster after being the club's first-round pick this summer.