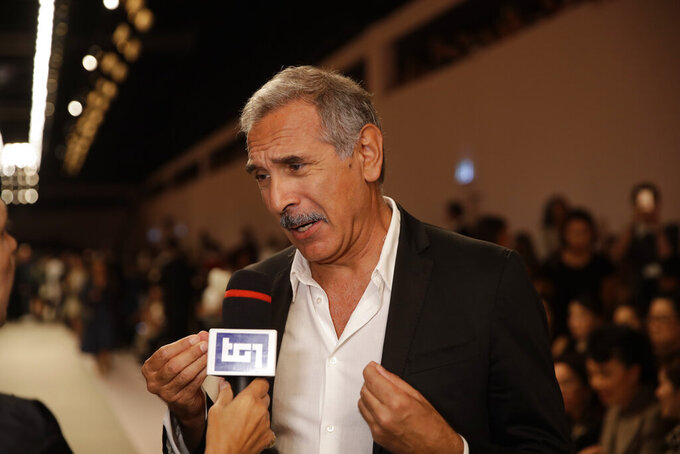 FILE - In this Thursday, Sept. 20, 2018 file photo, Carlo Capasa, head of the National Chamber of Italian Fashion, attends the Fendi women's 2019 Spring-Summer fashion show, during the Fashion Week in Milan, Italy. Italy’s fashion chamber opens the first Milan Fashion Week on Friday with no VIPS populating runway front rows, as the reality of the persistent virus resurgence in Italy has forced an all-digital, no physical week of menswear previews. (AP Photo/Luca Bruno, File)

MILAN (AP) — Italy’s fashion chamber is opening on Friday the first Milan Fashion Week that won't have VIPS populating runway front rows, as the reality of Italy's persistent resurgence of the coronavirus has forced an all-virtual format for presenting menswear previews.

The National Fashion Chamber maintained a live element during the July and September fashion weeks in Milan. But after planning to stage live shows with guests during this round, Fendi, Etro and outdoor brand Kway announced their events will be livestreamed from behind closed doors.

Dolce & Gabbana canceled its runway show entirely, citing restrictions in place due to COVID-19. The other 36 participating fashion houses on the pared-down calendar -- including Zegna and Prada -- will all have digital-only presentations.

“We did everything to preserve some runway shows, but the anti-COVID norms in this moment don’t allow us to have guests, and therefore, the runway shows will be closed-door,” fashion chamber president Carlo Capasa said.

The organizers of Paris Fashion Week plan to hold audience-free men’s and haute couture shows later this month. Prospects for Milan's February shows of mostly womenswear previews remain unclear; the Italian government on Friday announced a new round of virus-control restrictions through Feb. 15 that extend a ban on traveling between regions.

Capasa acknowledged that closed-door shows deprive fashion of some of its energy. But the pandemic, which has all but shut down global travel and closed retail stores for long periods , has made fashion houses quickly update their digital communication strategies and e-commerce platforms, he said.

There is some evidence the investments are paying off, with one-quarter of online luxury sales last year to consumers who went high-end for the first-time, Capasa said. The Italian fashion chamber found that 45 million people streamed Milan Fashion Week shows in September, a number that Capasa said was beyond his wildest dreams a year ago.

A more drastic decline was avoided thanks to so-called “revenge shopping” in China, with eager consumers returning to luxury shopping as soon as lockdowns expired, and moves toward e-commerce and a bump in global luxury sales in October, Capasa said. In Europe, where governments have ordered new lockdowns, the market remained weakest.

Capasa said the industry, one of the biggest generators of Italy's gross domestic product, is seeking a share of the government’s recovery funds to help improve innovation and to keep small artisanal businesses from failing.

He said he hopes to see a gradual return to normality in fashion show calendars and travel this summer, as vaccines reduce the threat of the coronavirus.

“For now, we need to do the best we can, in the moment we are living,’’ Capasa said.