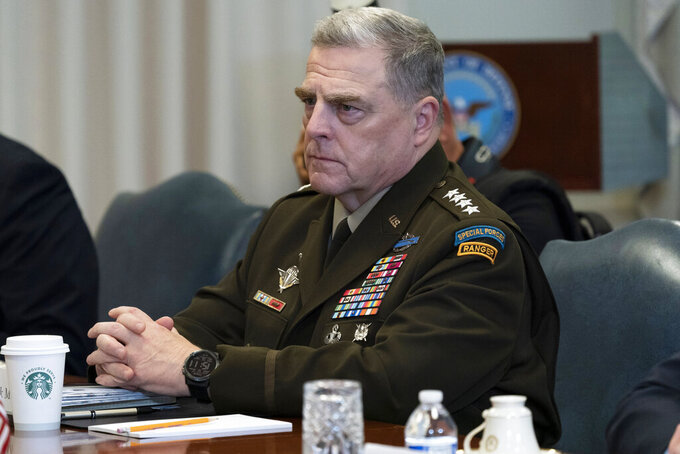 FILE - In this Sept. 22, 2020, file photo Joint Chiefs Chairman Gen. Mark Milley listens before a meeting with Secretary of Defense Mark Esper and Israeli Defense Minister Benny Gantz, at the Pentagon in Washington. The nation's top military leaders were under self-quarantine Tuesday, Oct. 6, after a senior Coast Guard official tested positive for the coronavirus, the Pentagon said. Milley, and the vice chairman, Gen. John Hyten, were among those affected, U.S. officials said. (AP Photo/Alex Brandon, File)

WASHINGTON (AP) — The nation's top military leaders were under self-quarantine Tuesday after a senior Coast Guard official tested positive for the coronavirus, the Pentagon said. The chairman of the Joint Chiefs of Staff, Gen. Mark Milley, and the vice chairman, Gen. John Hyten, were among those affected, U.S. officials said.

Military leaders who were in contact with Adm. Charles W. Ray, the vice commandant of the Coast Guard, were told Monday evening that he had tested positive, and they were all tested Tuesday morning, according to several U.S. officials. Pentagon spokesman Jonathan Hoffman said in a statement that none have exhibited symptoms or have so far tested positive.

Ray was in a meeting of the Joint Chiefs of Staff late Friday morning in what's called the Tank — the classified meeting room in the Pentagon. Officials said that is where most of the military leaders were exposed to him, but he also had other meetings with officials.

The news stunned officials at the Pentagon. Top leaders there have largely remained free of the virus, although there have been a number of outbreaks across the active-duty force and the reserves around the nation and overseas. Overall, more than 47,000 service members have tested positive for the virus, as of Monday, 625 have been hospitalized and eight have died.

It is not known how Ray contracted the virus. He attended an event for Gold Star military families at the White House on Sept. 27 that was hosted by President Donald Trump and first lady Melania Trump.

Several senior military leaders, including Milley, Defense Secretary Mark Esper, Army Gen. James McConville and Army Secretary Ryan McCarthy, also attended the event, which honored the families of service members who have died. A number of the military officials who were there got COVID-19 tests late last week after Trump and his wife both tested positive for the virus. According to officials, the military leaders were negative at that time, and they will continue to be tested in the coming days.

It’s not clear if Ray contracted the virus at the White House event or elsewhere, officials said.

The Coast Guard said in a statement that Ray felt mild symptoms over the weekend and was tested Monday. It said he will quarantine from home, and other Guard personnel who were in close contact with him will also quarantine. The Coast Guard headquarters is not located in the Pentagon; it is in southeast Washington, D.C. It is the only military service that falls under the Department of Homeland Security rather than the Defense Department.

In accordance with established Coast Guard COVID policies, Admiral Ray will be quarantining from home.

Hoffman said the quarantining of leaders won't affect “the operational readiness or mission capability of the U.S. Armed Forces.” He added that, "senior military leaders are able to remain fully mission capable and perform their duties from an alternative work location.”

Top military leaders have robust communication systems installed in their homes as a routine matter, and many have sporadically worked from home during the pandemic for a variety of reasons. Some stayed home after having been exposed to the virus and other military leaders have self-quarantined for a short time after returning from travel.

Hoffman's statement did not identify those affected, but multiple U.S. officials said that besides Milley, they included the chiefs of the Army, Navy, Air Force and National Guard, as well as the head of U.S. Cyber Command, Gen. Paul Nakasone. The officials spoke on condition of anonymity to discuss information not yet made public.

At least 14 military officials — including some staff members of the chiefs — are believed to have been potentially exposed to the virus after meetings last week with Ray. Hoffman said the military is conducting additional contact tracing to identify anyone who may have been exposed.