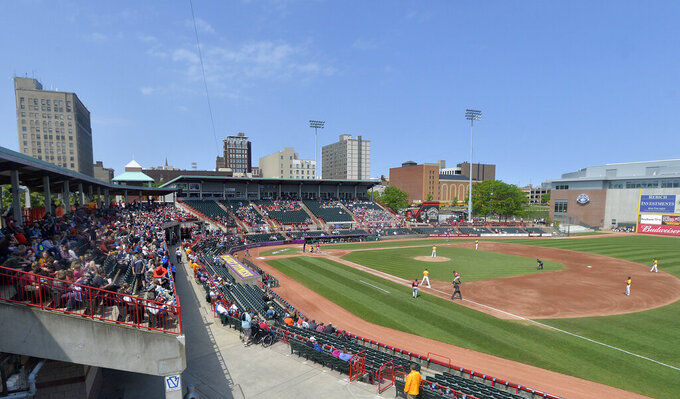 FILE - In this June 4, 2019, file photo, the Erie SeaWolves host the Altoona Curve for an Eastern League baseball game at UPMC Park in Erie, Pa. Major League Baseball has reorganized its minor leagues in a 120-team regional alignment, MLB announced, Friday, Feb. 12, 2021. The leagues have not yet been named and Major league owners, Commissioner Rob Manfred and his staff have not decided whether to retain the traditional names of the leagues, such as Pacific Coast League. (Greg Wohlford/Erie Times-News via AP, File)

NEW YORK (AP) — Major League Baseball will experiment with several rule changes in the minor leagues this season, including an automated strike zone, restrictions on defensive positioning and larger bases.

The league said in a statement Thursday the "changes being tested are designed to increase action on the basepaths, create more balls in play, improve the pace and length of games, and reduce player injuries.”

The league's automatic ball-strike system will be used at some Low-A Southeast League games, the closest that computer umpires have come to the majors. ABS has already been used in the independent Atlantic League and the Arizona Fall League. It got mixed reviews from players, with complaints about how the TrackMan system grades breaking pitches down in the zone.

Infielders at Double-A will have to keep both feet in the infield at the start of every play. While a defensive team must have at least four players within the outer boundary of the infield dirt, there won't be a ban on shifting three or more defenders to either side of second base, although the league may experiment with such a rule pending results of the initial experiment.

Triple-A is getting larger bases, expanding first, second and third from 15 by 15 inches to 18 by 18. MLB said it hopes to reduce player injuries and collisions, and also that the shortened distance between bases should “have a modest impact” increasing stolen baes and infield hits.

“The game's been played with 90 feet bases forever, so I don't think they need to change that,” the 2020 home run champion said Friday.

“In my opinion, you got to adapt in this game, and if you don't adapt, you find your way out of it,” he said. “If you got to hit the ball to the opposite field or try to find to do something different with your approach, then change it. I think a lot of guys get content, and they find their way out of the game. ... It's worked for a lot of teams, an awful lot of teams that usually wouldn't be around in the playoffs every year.”

Pitchers at the lower levels will also be restricted in their ability to hold baserunners. At all High-A levels, pitchers will have to fully disengage from the rubber prior to throwing to a base under penalty of a balk. The rule will eliminate the most effective style of pickoff move used by left-handed pitchers — perhaps most effectively by Steve Carlton and Andy Pettitte.

“We are listening to our fans," said Michael Hill, MLB senior vice president of on-field operations. “This effort is an important step towards bringing to life rules changes aimed at creating more action and improving the pace of play.”

The Low-A West league will also adopt on-field timers previously used at other levels with additional regulations to reduce game length and improve pace of play.

The coronavirus pandemic wiped out the 2020 minor league season and is expected to delay the start of the 2021 schedule until around the first week of May. The minors were contracted from 160 teams to 120 this offseason following the expiration of the Professional Baseball Agreement governing the relationship between MLB and National Association of Professional Baseball Leagues, which operated the minors. MLB has since assumed full control of the enterprise.

“The game on the field is constantly evolving, and MLB must be thoughtful and intentional about progressing toward the very best version of baseball — a version that is true to its essence and has enough consistent action and athleticism on display to entertain fans of all ages,” said former Red Sox and Cubs executive Theo Epstein, now a consultant to MLB.

“These rules experiments will provide valuable insight into various ways to create a playing environment that encourages the most entertaining version of the game. What we learn in the Minor Leagues this year will be essential in helping all parties chart the right path forward for baseball.”

MLB also will continue its partnership with the Atlantic League and said it may announce additional rules experiments there in the coming weeks.