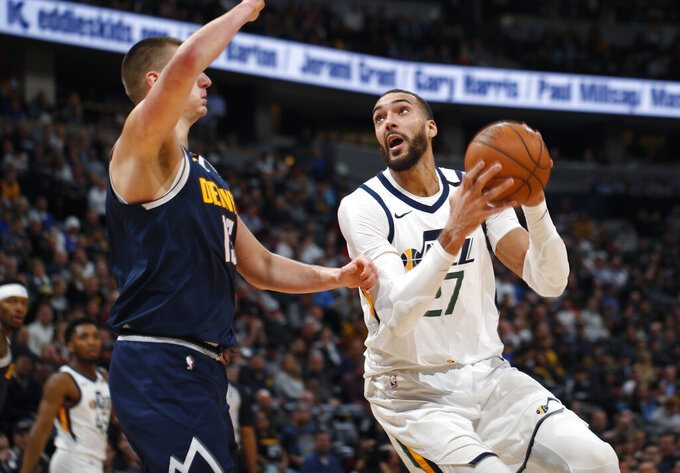 The Utah Jazz had plenty on their plate over the hiatus.

Turns out, Rudy Gobert makes a mean coconut chicken and Donovan Mitchell a tender seasoned duck. Many members of the Jazz swapped the court for the kitchen over the down time to bake their own home recipes in creating a “Quarantine Cookbook."

Back on the court, the secret ingredient for the playoff-bound Jazz boils down to this: Mitchell and Gobert being on the same page for the NBA relaunch in Lake Buena Vista, Florida.

The connection between the two All-Stars was fractured after Gobert became the first player in the league to test positive for the coronavirus. Two days before that, Gobert jokingly touched all the recorders on a table in front of him during a media session on March 9.

It was no laughing matter when Gobert soon tested positive, followed by Mitchell.

Gradually, they’re patching up the relationship.

“As long as we respect one another and we both share the same goals and we both do what’s best for the team, that’s what matters,” said Gobert, whose team is currently the fourth seed in the Western Conference.

When not honing his culinary skills, Mitchell was sharpening his passing game. Already an elite scorer, he wants to be a top-notch facilitator, too.

“A more willing passer,” said Mitchell, who’s averaging 24.2 points and 4.2 assists per game. “Take the shots I can get but also find my teammates to get them easier looks, which will then come back and make it easier on myself.”

And who better to dish it off to than the 7-foot-1 Gobert, the league leader in dunks.

“Both Rudy and Donovan are learning every game, every practice how to play better together,” Jazz coach Quin Snyder said. “In Donovan’s case, I feel great about what he’s doing and what he’s doing with Rudy ... with all the guys on our team. We’ve got an unbelievably unselfish team.”

Mitchell has emerged as the face of the franchise since breaking onto the scene in 2017-18. It's a responsibility he doesn't take lightly.

“The biggest thing for me is not allowing the name I’ve created on the floor and off the floor to affect the work that I’ve been doing,” Mitchell said. “Continuing to work on my game, get better as a teammate, better as a leader, better as a player."

With their beef set aside, he and Gobert are focused on leading the Jazz.

“I’m happy now. I’m in a good place,” said Gobert, who’s in the running for his third straight defensive player of the year award. “I’m ready to try to go out there and try to win the championship."

They’re going to have to find a way to replace the 3-point shooting of Bojan Bogdanovic, who underwent right wrist surgery in May. Bogdanovic was averaging 20.2 points, 4.1 rebounds, 2.1 assists and three 3-pointers a game in his first season with the Jazz.

“Certainly not having Bojan hurts,” Snyder said. “At the same time, we’ve got some really good players that are capable of making plays.”

The Jazz were scheduled to play in Oklahoma City on March 11 when the game was halted. A few minutes later the NBA season was suspended after a Jazz player tested positive for the coronavirus. It turned out to be Gobert.

Utah had won five of six and was one of the top field-goal shooting teams in the league.

The Jazz will honor Hall of Fame coach Jerry Sloan with a patch on their jerseys that reads “1223."

It’s the number of his total wins during his 23 seasons as head coach of the Jazz. He died in May of complications from Parkinson’s disease and Lewy body dementia. He was 78.

The Jazz cooked up something special with their “ Quarantine Cookbook ” and video series. It's a collection of home recipes from players, coaches and team chef Anthony Zamora.

Conley won the NBA HORSE Challenge in April by knocking off Bulls guard Zach LaVine in the final. Conley secured the title with a layup from behind the backboard.

The break did wonders for the 32-year-old Conley, who has missed games with injuries, including 19 because of a left hamstring ailment.

“I’m anxious and excited to get out there and continue to do this," Conley said.