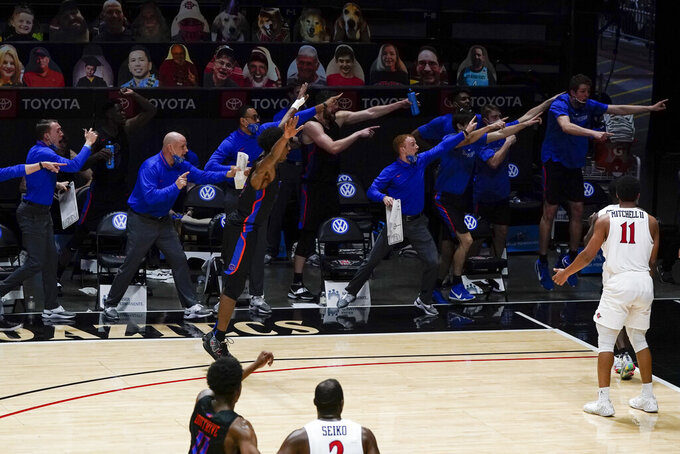 Boise State players and coaches signal that they had possession of the ball during the second half of an NCAA college basketball game against San Diego State, Thursday, Feb. 25, 2021, in San Diego. (AP Photo/Gregory Bull)

SAN DIEGO (AP) — After breezing through eight straight wins by an average of 26.4 points, No. 22 San Diego State was brought back to reality by Boise State.

Matt Mitchell scored 24 points, including four in overtime, and the Aztecs overcame 29 points by Derrick Alston Jr. to beat the Broncos 78-66 on Thursday night for their ninth straight win.

Trey Pulliam matched his career high with 18 for SDSU, which blew a 17-point second-half lead before recovering in overtime to take the inside track to repeating as Mountain West Conference regular-season champion.

“We knew this kind of game was coming,” coach Brian Dutcher said. “It’s getting to March, it’s getting to conference tournament, it’s getting to another hard game with Boise and hopefully if we play well enough, the NCAA Tournament. The rest of the games are probably going to have a feel like this.”

SDSU (18-4, 12-3) took a half-game lead over Boise State (18-5, 14-4), which had its four-game win streak snapped. On Tuesday, the Mountain West awarded San Diego State a pair of forfeit victories over New Mexico. Those games do not count in SDSU’s overall or formal conference record, but will count for seeding and conference championship implications.

That means the Aztecs control their own destiny. They host BSU again on Saturday and then finish with a rescheduled game at UNLV on Wednesday night.

Alston scored 22 points in the second half, including Boise State's first 11 points, to help bring the Broncos back from a 17-point deficit. BSU used a 14-0 run to pull to 52-51, getting three 3-pointers from Emmanuel Akot and a 3 from Alston.

“He just flipped a switch and was a great competitor in the second half and we’re going to need every second of that when we play them again,” coach Leon Rice said.

After Abu Kigab missed two straight inside shots, Alston hit a step-back 3 to tie it at 58 with 1:39 to go.

Mitchell converted a three-point play for a 61-58 lead and then hit two free throws with 27 seconds left for a 63-60 lead. RayJ Dennis hit a 3-pointer to tie it with 9.3 seconds left.

Mitchell was called for a charge and the game went to overtime. Mitchell made two shots sandwiched around a 3-pointer by Jordan Schakel, and BSU never recovered. Alston was 0 for 2 in overtime and Boise State, the league's highest-scoring team, had only three points in the extra period.

The Aztecs fattened up on the conference's second-tier teams during their winning streak and then came out strong against the Broncos.

SDSU put on a defensive clinic in the first half, forcing 12 turnovers while BSU went just 3 of 17 on 3-pointers.

Pulliam had 11 points in the first 20 minutes, including a jumper off a rebound at the buzzer for a 29-17 lead.

“When you dig yourself that big of a hole, it’s a long way back and a whole lot of energy,” Rice said. "Our guys left it all out there. That first half they dictated everything that we did and we dug ourselves a big hole because that’s how soft we were that first half.

“We adjusted and fixed it the second half, and I was proud of that.”

Rice said he knows both teams will be eager for Saturday's rematch.

“These are two really, really good teams and that showed up tonight. We were getting blasted and we didn’t lay down. Got it to overtime but didn’t have enough in the tank,” he said.

San Diego State: The Aztecs are playing for their eighth regular-season MWC title. They won the championship last year en route to a 30-2 overall record. They were expecting a No. 2 seed in the NCAA Tournament before it was canceled due to the coronavirus pandemic.

The teams finish their two-game series on Saturday afternoon.