Mladic lawyers call on UN judges to overturn his convictions 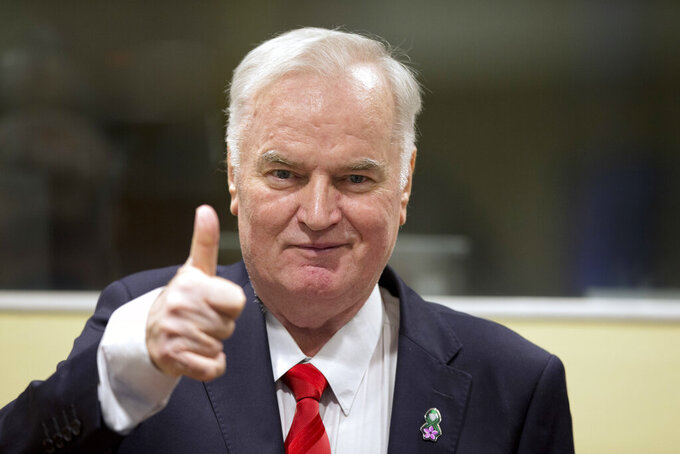 FILE - In this Wednesday, Nov. 22, 2017 file photo, Bosnian Serb military chief Ratko Mladic enters the Yugoslav War Crimes Tribunal in The Hague, Netherlands, to hear the verdict in his genocide trial. Mladic is appealing Tuesday, Aug. 25, 2020 against his convictions for crimes including genocide committed throughout the 1992-95 Bosnian War. Mladic was convicted by a U.N. war crimes tribunal in 2017 and sentenced to life imprisonment for masterminding crimes by Bosnian Serb forces throughout the war that left 100,000 dead, an overwhelming majority of them Bosnian Muslim civilians. (AP Photo/Peter Dejong, Pool, File)

THE HAGUE, Netherlands (AP) — Lawyers for Ratko Mladic called on U.N. judges Tuesday to overturn his convictions for crimes including genocide committed as commander of Bosnian Serb forces throughout the 1992-95 Bosnian War. Mladic was sentenced to life imprisonment in 2017 for his role in atrocities including the Srebrenica massacre and the siege of Sarajevo.

At a hearing conducted partly by video conference at the U.N.'s International Residual Mechanism for Criminal Tribunals, Mladic's legal team spent the day insisting that his 2017 convictions were riddled with legal and factual errors.

The appeals judges' decision, likely to take months to reach, will go a long way to determining the legacy of the international tribunal that convicted dozens of war criminals from the 1992-95 Bosnian war including Mladic and his political master, Radovan Karadzic.

Karadzic's convictions on the same charges as Mladic were upheld almost in their entirety on appeal and he was sentenced to life imprisonment.

Mladic's lawyer Dragan Ivetic opened the hearing by arguing that the 77-year-old former general may not be mentally fit to participate in the hearing. Mladic's legal team suggested at a hearing earlier this year that he could be suffering from early stage dementia.

“It is a denial of due process to sentence or proceed criminally against someone who is incompetent to stand trial,” Ivetic said.

The hearing proceeded despite Ivetic’s objections. Mladic was in court and initially wore a face mask, before pushing it below his chin and then removing it altogether.

Mladic’s lawyers outlined to judges some of the nine grounds of appeal against his convictions and sentence that they filed in a written document two years ago, alleging errors of fact and law by the judges who convicted the former general.

Mladic was found guilty of crimes throughout the war and throughout Bosnia, including genocide for his role in the 1995 murder of more than 8,000 Muslim men and boys at the Srebrenica enclave in eastern Bosnia, Europe's worst massacre since World War II.

Ivetic, however, argued that the Srebrenica convictions were based on hearsay and incorrect inferences by trial judges.

“I submit the conviction of Mr. Mladic for genocide was made out of thin air,” he said.

The hearing was repeatedly interrupted by problems with video connections, with Presiding Judge Prisca Matimba Nyambe overseeing the case via a link from Zambia.

Lawyers for Mladic have often complained about his ill health and difficulties communicating with him due to coronavirus restrictions, but in a written ruling before Tuesday’s hearing, judges said that the lawyers hadn’t “substantiated that Mladic is unable to communicate, consult with his counsel, and/or understand the essentials of proceedings.”

That did not stop Ivetic raising the matter again.

Mladic wants the U.N. appeals mechanism to overturn all his convictions and acquit him, or order a retrial.

Prosecutors, meanwhile, are appealing against Mladic's acquittal on a second count of genocide related to “ethnic cleansing” campaigns to drive Bosnian Muslims and Croats out of territory claimed by Serbs in Bosnia.

Mladic is expected to speak at the end of the hearing on Wednesday.

He evaded justice for nearly 16 years after his indictment in July 1995, until he was arrested in Serbia in May 2011 and transferred to The Hague to stand trial.